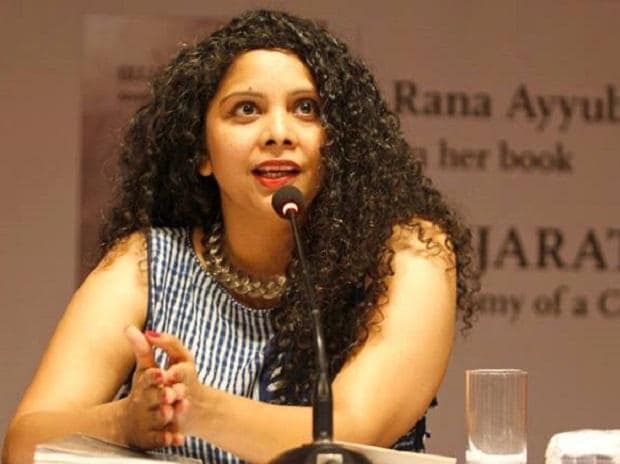 The Bombay High Court on Monday granted interim transit bail to journalist Rana Ayyub for a period of four weeks as part of an FIR recorded against her by the Uttar Pradesh police for allegedly showing a video in which an elderly Muslim man claimed to have been severely beaten and questioned for chanting ‘Jai Shri Ram’.

Police from their FIR said the video was circulated to create community unrest.

The FIR was registered at the Loni Border Police Station in Ghaziabad in the UP on June 15 under sections 153 of the IPC (provocation with intent to riot), 153A (promotion of enmity between groups for reasons of religion, class, etc.), 295A (deliberate and malicious acts, intended to outrage the religious feelings of any class by insulting its religion or religious convictions) and 120B (criminal association).

Ayyub’s lawyer Mihir Desai told Judge PD Naik’s bench on Monday that the applicant was a journalist who had just transmitted the video from her Twitter account.

“On June 16, when she learned that the content of the video was not correct, she deleted it,” Desai said.

He further stated that the offenses for which Ayyub had been convicted were all punishable by up to three years in prison and, therefore, she should have time to apply to the relevant court in the case. Uttar Pradesh to seek redress.

Judge Naik noted that the police investigation later discovered that the person, who allegedly claimed to have been badly beaten and forced to sing “Jai Shri Ram”, had an altercation with the people who had beaten him for. another transaction.

“Taking into account the factual aspects of the case and to enable the applicant (Ayyub) to apply to the relevant court in Uttar Pradesh where the FIR is located, protection against arrest may be granted for a temporary period of four weeks. “, said the court in its order.

“If the applicant is arrested during this period, she will be released on personal bail of Rs 25,000”, said Judge Naik, adding that there would be no extension of the time granted to the applicant. .

According to the FIR, the defendants did not verify the credibility of the video and shared it online from a community perspective with the intention of disrupting the public peace and creating a divide between two religious groups.

In a video clip, which surfaced on social media on June 14, the man, identified as Abdul Shamad Saifi, was heard to say he was beaten by young men and asked him to sing “Jai Shri Ram “.

However, police in Ghaziabad ruled out a community angle and said the defendants were unhappy with a tabeez (amulet) the victim sold them.

(Only the title and image of this report may have been reworked by Business Standard staff; the rest of the content is automatically generated from a syndicated feed.)

Business Standard has always strived to provide up-to-date information and commentary on developments that matter to you and have broader political and economic implications for the country and the world. Your encouragement and constant feedback on how to improve our offering has only strengthened our resolve and commitment to these ideals. Even in these difficult times resulting from Covid-19, we remain committed to keeping you informed and updated with credible news, authoritative views and cutting-edge commentary on relevant current issues.
However, we have a demand.

As we fight the economic impact of the pandemic, we need your support even more so that we can continue to provide you with more quality content. Our subscription model has received an encouraging response from many of you who have subscribed to our online content. More subscriptions to our online content can only help us achieve the goals of providing you with even better and more relevant content. We believe in free, fair and credible journalism. Your support through more subscriptions can help us practice the journalism to which we are committed.

Summit on the role of religion in sport