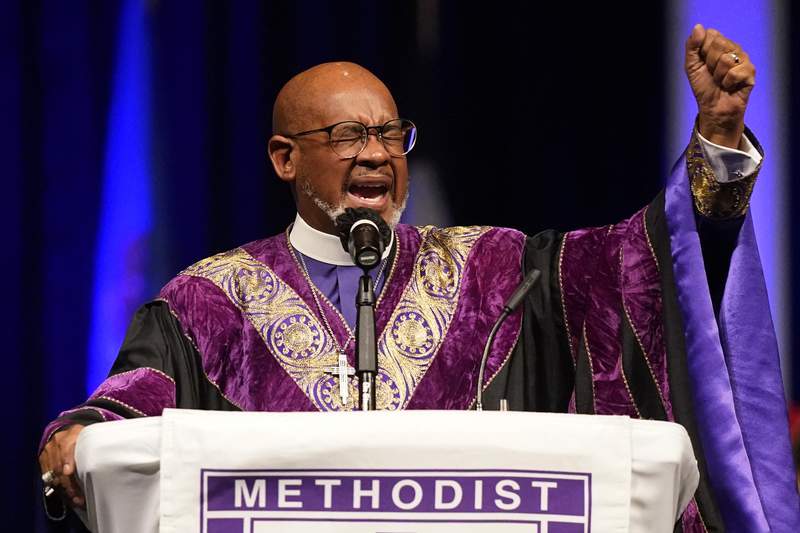 The African Methodist Episcopal Church, the oldest historically black denomination in the United States, kicked off its general conference on Tuesday with delegates expected to address racial issues such as voting rights and the Black Lives Matter movement.

The coronavirus pandemic forced a year behind the five-day legislative meeting. And a planned simultaneous gathering in Cape Town for church officials from several African countries had to be canceled after South Africa banned large gatherings due to an increase in COVID-19 cases.

So the denomination, which has churches in many countries and is particularly strong in places like South Africa, Liberia, Namibia and Zambia, combines in-person events in Orlando, Florida with members. from across Africa participating online individually or in small groups. .

â€œIt was extremely important to us that this part of our church be represented at our General Conference,â€ said Richardson, who is the church’s longest-serving active bishop and whose district includes Florida and the Bahamas.

The gathering opened with worship before moving on to serious matters.

President Joe Biden and Vice President Kamala Harris were to address members via video, and Florida Representative Val Demings, a member of the AME Church, was also due to speak.

The church has its roots in 1787, when black worshipers left a separate, white-led Methodist church and formed AME, which also became a pioneer in the ordination of women.

A member, Ravi Perry, who is chair of Howard University’s political science department, urges the denomination to build on that legacy at the conference by repealing its anti-gay marriage policy.

The proposal follows similar debates in several historically white denominations. Some, like the Presbyterian Church (United States) and the Episcopal Church, have allowed their clergy to perform same-sex marriages.

â€œIf a black church wants to do this first, it will be the AME church,â€ Perry said. â€œI hope the AME Church will remember its roots of social inclusion. “

The repeal faces uncertain prospects. A rules committee decides what legislation to bring to the conference this week, although delegates may ask for additional matters to be considered.

A 2016 policy statement says the denomination’s opposition to same-sex marriage is based on a Biblical interpretation. At the same time, he acknowledges that AME has gay members in many of its congregations and declares that they are eligible for church office at all levels.

Other Methodist denominations have faced the problem.

The United Methodist Church, which is also based in the United States with a strong African presence, currently prohibits same-sex marriages or the ordination of same-sex clergy. But long-standing divisions over these issues have sparked a widely approved proposal to split the denomination, which will likely be voted on in 2022.

The Methodist Church of Britain, meanwhile, voted in June to allow same-sex marriages.

Richardson said that while he does not foresee an immediate repeal of the AME’s position, he sees an ongoing development that reflects trends in society at large – “the more families we have supporting us and mothers and fathers who stand with their children “.

Conference delegates also elect new bishops and other officers. Thabile Ngubeni of South Africa urges delegates to “make history” by choosing her as the first African lay woman to serve on the church’s Judicial Council.

And retired Bishop Vashti McKenzie, who was ordained in 2000 as the first female AME bishop, will be recognized for her leadership.

“She has been able to do extraordinarily well by bringing administrative strength, spiritual strength and community development strength,” said Bishop Anne Henning Byfield, chair of the AME Council of Bishops.

The pandemic, which claimed the lives of many AME members and ministers, continues to be at the forefront of delegates’ minds. Attendance in the Orlando meeting room will be limited, with masks and other health precautions in place.

Richardson, who said he has held more funerals in the past year than ever before, said church officials will continue to urge people to get vaccinated. And the outbreak in South Africa is a reminder that many countries are still plunged into the pandemic.

John Thomas III, editor-in-chief of Christian Recorder, the official outlet for AME, said the pandemic forced the denomination to adopt an austerity budget but overall it weathered the storm well.

â€œWhat we’ve seen is that people are very loyal to the church and to the community,â€ Thomas said. If a church was “already doing community work and engagement before the pandemic, all you had to do was pivot.”

The Associated Press religious coverage receives support from the Lilly Endowment via The Conversation US. The AP is solely responsible for this content.

Copyright 2021 The Associated Press. All rights reserved. This material may not be published, broadcast, rewritten or redistributed without permission.

West Marion in particular should be wary of Tropical Storm Elsa