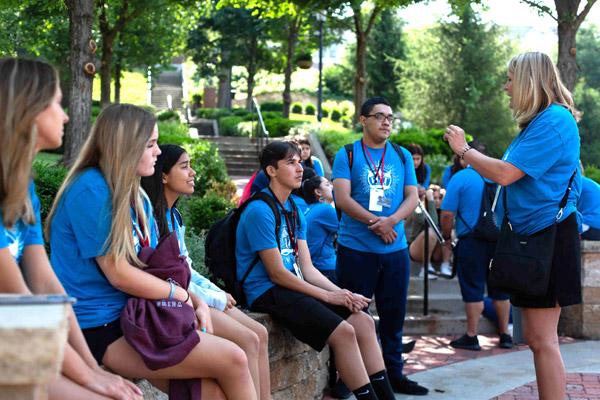 By Cole Blagg
Special for Catholics in Arkansas

Suzie Perry, director of youth training for St. Vincent de Paul Church in Rogers, leads a small group discussion on June 20 with youth from the ward attending the Benedictine College Youth Conference Meeting in Kansas . There were 96 Arkansas teens who attended the weekend retreat.

Suzie Perry, director of youth training for St. Vincent de Paul Church in Rogers, leads a small group discussion on June 20 with youth from the ward attending the Benedictine College Youth Conference Meeting in Kansas . There were 96 Arkansas teens who attended the weekend retreat.

Even in the midst of the summer heat and an ongoing COVID-19 pandemic, 96 high school students in Arkansas have still found reason to celebrate.

â€œI was contacted by the Benedictines, and they had former students who funded a

outreach to the mission diocese (s), whichâ€¦ (the diocese of) Little Rock is, â€said Liz Tingquist, director of the Catholic Campus and Diocese Youth Ministry office.

As a result, Arkansas students could participate for just $ 75 instead of the advertised price.

While the conference shared much in common with other youth conferences like Steubenville – prayer, sacraments, Eucharistic worship – Charlotte Self, youth director at Our Lady of Good Counsel Church in Little Rock, did not Delayed in pointing out some interesting distinctions.

â€œIt took place at Benedictine College, where they have an abbey on campus,â€ she said. â€œIt was a unique experience for my (teenagers) to spend time going to massâ€¦ and praying the liturgy for hours with the monks and living these experiences that they had never had before.â€

Three hundred students from several states attended, which was a smaller audience than the thousands expected at similar conferences.

â€œIt was really just this opportunity to go to something that I don’t believe any of these parishes have been before that was more intimate, a little more organic,â€ Tingquist said. “Our kids were exchanging cell phone numbers with kids in other states, and you don’t really get that from Steubenville.”

Nitze Chable, a 17-year-old rising elder, parishioner of Our Lady of Good Counsel Church, said she enjoyed hearing from guest speakers at the conference, including Sarah Swafford, founder of Emotional Virtue Ministries, and Sister Mary Elizabeth Albers of the Society of Our Lady of the Most Holy Trinity.

â€œWhen Sarah was talking about women’s speech, that was my favorite thing,â€ she said. “One of the things I take with me is (something she) pointed out: it’s OK to be a masterpiece and a work in progress at the same time.”

Saturday night’s confession and Eucharistic adoration were the highlights of the weekend, participants said. Anna Luebbering, 17, a parishioner at St. Anne’s Church in Berryville, described the worship as “so perfect.”

â€œTo be there in the presence of God and to know what is done and sacrificed for usâ€¦ (is) peaceful, reassuring,â€ she said.

Chable said after going to confession, â€œI really felt the need to kiss someone, and I usually don’t. I just felt like there was, spiritually, someone telling me to do it.

Luebbering said she was aware of the challenge of carrying this spirit into her daily life.

â€œYou have all these people who areâ€¦ in the same faith community, but when you come home, (it’s) likeâ€¦ we go back to our little bubble,â€ she said. “I just wish I could go back already.”