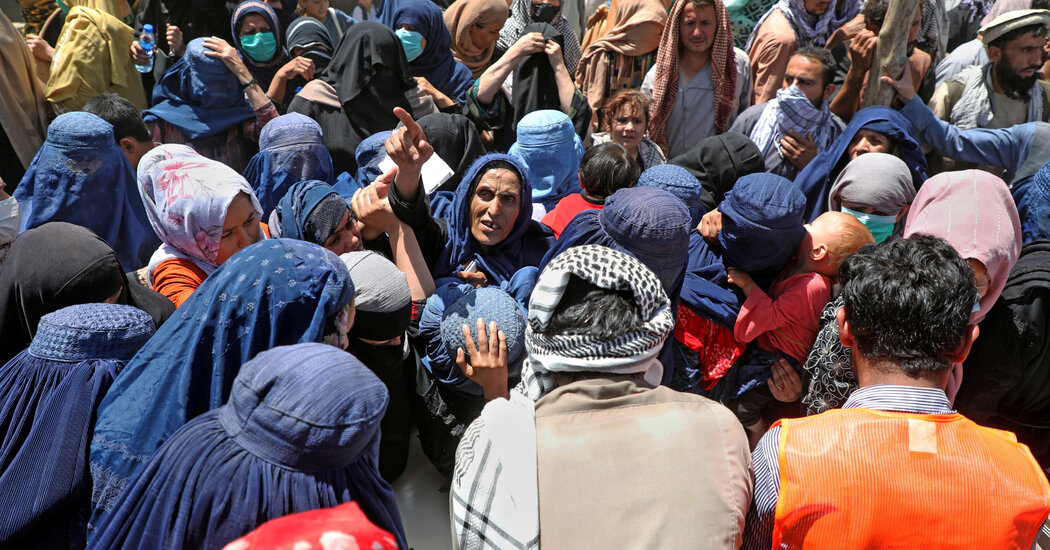 Reviews | Biden’s withdrawal from Afghanistan may have helped the Taliban

This article has been updated to reflect current developments.

The Taliban are sweeping through Afghanistan, seizing more than a dozen provincial capitals last week, and preparing to seize more. The Afghan defense forces, mostly cut off from US air support, have not been able to stop them, and the Afghan government may not survive for long. The United States has practically abandoned the country.

A disastrous Taliban takeover was not inevitable. President Biden has said his hands are tied in a withdrawal given the terrible peace deal negotiated between the Trump administration and the Taliban. But there was still a way to withdraw US troops while giving our Afghan partners a better chance of maintaining the gains we have made with them over the past two decades.

Mr. Biden chose otherwise. His way of announcing the withdrawal and eventual departure of US troops – early in the fighting season, promptly and without adequate coordination with the Afghan government – has put us in part in the current situation.

Reasonable people may disagree on the wisdom of keeping US military forces in Afghanistan indefinitely, even in very small numbers. I and others have argued that the investment, including the risk to American personnel, was worth it to prevent militant groups from invading the country again.

Mr. Biden believes that increasing US resources in Afghanistan is “a recipe for being there indefinitely.” He rightly notes that President Trump left him few good options by making a terrible deal with the Taliban. This is a fine argument, but it does not explain the haste or the consequences we are currently seeing: the Taliban are invading the country, closing in on Kabul, pushing the Afghan security forces and government to the brink of collapse and urge the Pentagon to prepare for a possible evacuation of the American embassy.

Responsible withdrawal required more time and better preparation. History will remember that Mr. Biden, a so-called master of foreign policy for decades, failed in this most critical mission.

As US military planners are well aware, the war in Afghanistan has a seasonal pattern. Taliban leaders retreat to bases, mostly in Pakistan, each winter, then launch the group’s combat campaign in the spring, shifting into high gear in the summer after the poppy harvest. At the very least, the United States should have continued to support the Afghans during this time to help them blunt the latest Taliban offensive and buy time to plan for a future without U.S. military assistance.

US diplomats could have taken advantage of this time to negotiate access to regional bases from which to continue counterterrorism operations. At the same time, the US military should have prepared for contingencies in case these negotiations failed. And even that plan would have meant fighting an increasingly brazen Taliban. (A report by the Special Inspector General for the Reconstruction of Afghanistan indicates that the Taliban launched their latest offensive after US and coalition forces formally began to withdraw in May.)

Taking a smarter approach would have forced Biden to agree to two things in addition to a longer deadline: the temporary deployment of additional US forces and the slightly increased risk of US casualties.

Obviously, Mr. Biden did not do it that way. Instead, he ordered a hasty withdrawal of the military just as the Taliban offensive entered its major phase.

Several weeks after the president’s announcement, there was no clear plan to respond to terrorist threats emanating from Afghanistan after the withdrawal. It was still unclear whether the United States would continue to provide air support to Afghan forces, whether they would have bases in neighboring countries, or how the Kabul International Airport would be secured – an essential element in maintaining a presence. American diplomatic service in the country. .

Since then, the US military has provided some support to Afghan forces as the Taliban continue to advance. Unfortunately, this support was too limited and too late to save the big cities under attack. In addition, several details of the withdrawal appear to remain unresolved, including how to keep the Afghan army operational without the presence of US contractors for technical support, and how to expedite the immigration of Afghan interpreters who risked their lives for the troops. American. Protecting these people is an ethical responsibility and a strategic imperative, but the administration’s current special immigrant visa program is experiencing delays.

To be clear, Mr. Trump put the Biden administration at an impasse with a peace deal that specified that US troops were to leave by May 1. Still, Mr Biden missed that deadline, so pushing for a slightly longer deadline with a few extras. troops, even if in theory this goes against the peace agreement, it should not have been difficult for the administration to agree to allow an orderly and safer withdrawal. The additional financial cost of waiting for the start of 2022 to complete the withdrawal would have been bearable with a slightly different budget prioritization. (The Senate just passed a trillion dollar infrastructure bill and passed a $ 3.5 trillion budget plan.)

And then there is the perspective of an American retreat. Mr Biden has repeatedly stressed the importance of getting US forces out because it was tied to the peace deal and out of fear that US soldiers would be attacked by the Taliban. Is this really the kind of scary, defeatist message that a world leader should send to the world?

The US and Afghan governments are now working to mitigate the effects of Mr. Biden’s specific decisions. In the midst of the chaos, there is an important lesson to be learned: Whether announced by tweet or speech, decisions made without concrete plans or solid implementation strategies are wrong, no matter which president or which party is in. directs them.

Afghans are now paying the price for Mr. Biden’s decision as the Taliban seize cities, assassinate officials and begin to re-impose their oppressive ideology on a people who have long fought to free themselves from them.

The United States will also likely continue to pay for its actions in Afghanistan. There is a real danger that militant groups will reconstitute themselves and again pose a significant threat to the American homeland. With America’s allies left in the dark, potential partners will think twice before offering their support in future conflicts.

They know this is not how a world leader acts. And most importantly, so do we.

Frederick W. Kagan is a senior fellow and director of the Critical Threats Project at the American Enterprise Institute. He was part of General Stanley McChrystal’s civilian advisory team in Afghanistan in 2009 and advised three commanders of US and international forces in Afghanistan.

The Times commits to publish a variety of letters For the publisher. We would love to hear what you think of this article or any of our articles. Here is some advice. And here is our email: [email protected].