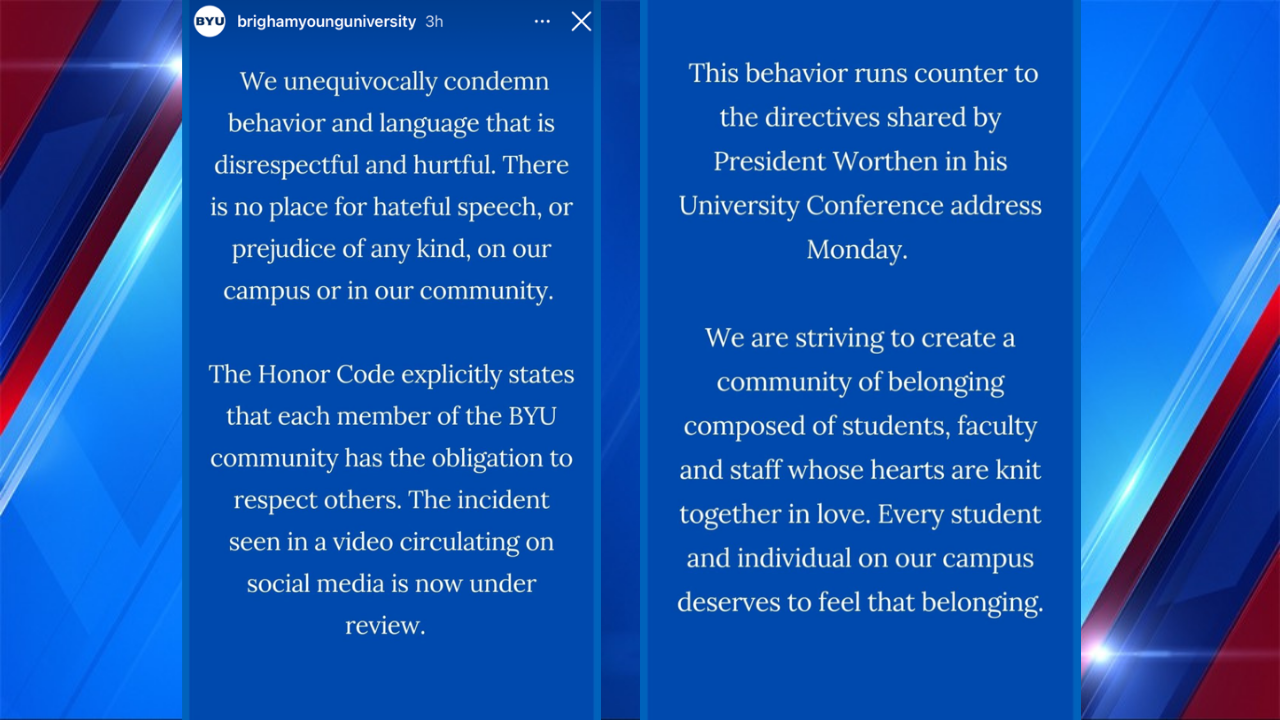 PROVO, Utah (ABC4) – Video of a man attempting to wipe off LGBTQ + compatible sidewalk chalk before uttering a homophobic slur on the Brigham Young University campus sparks outrage and attention from members of the community and school officials.

In the video posted on multiple Reddit forums along with other social media platforms, a blond-haired man in a gray and black shirt with black sweatpants and Converse All-Star shoes, is shown pouring out a bottle of what is likely of water on rainbow colored chalk on the sidewalk.

When confronted with the person recording the video and others, the man finishes the bottle before walking away saying “Oh no, crazy people are going to hell.”

“I’m sure the Bible says that,” responds a voice behind the camera, sarcastically.

â€œWe unequivocally condemn disrespectful and hurtful speech and behavior. There is no room for hate speech or prejudice of any kind, on our campus or in our community. The Honor Code explicitly states that each member of the BYU community has an obligation to respect others. The incident seen in a video posted on social networks is currently under investigation. This behavior flies in the face of guidelines shared by President Worthen in his university conference address on Monday. We strive to create a community of belonging made up of students, faculty and staff whose hearts are bound by love. Every student and individual on our campus deserves to feel that belonging.

The videotaped incident is seen by many as an extension of the issues surrounding the treatment of LGBTQ + students at the university, which is owned and operated by The Church of Jesus Christ of Latter-day Saints.

Monday, BYU Chairman Kevin Worthen Announces New Office of Belonging at the university, which was founded to help create a sense of community for students who may feel marginalized due to their race, gender or sexual orientation.

â€œIt will provide guiding principles for the assessment and implementation of the recommendations provided by the Race, Equity and Belonging Committee. But it will also be the guide to meeting the needs of all marginalized people on campus â€, Worthen said at the college conference on campus.

Worthen’s announcement was followed by a speech by Jeffery R. Holland, a member of the Church’s Quorum of the Twelve Apostles, who has created new controversy on social media and in the BYU, Utah, and LDS community.

In her address, Holland compared defending the Church – and therefore BYU – position that sex should only exist in a marriage between a man and a woman to “musket fire.”

Holland also said that he and other members of the Church’s top governing council have “Spent more time and shed more tears on this subject than we could ever adequately convey to you this morning, or any morning.” We spent hours discussing what Church doctrine can and cannot do for individuals and families struggling on this difficult issue. So it is with our own scar tissue that we try to avoid – and hope all will try to avoid – language, symbols and situations that divide more than unify at the very moment we want to show love. for everyone from God. children, “ referring to students and church members who experience same-sex attraction or gender conflict.

While declaring his love and concern for those who may feel outside the mold of a typical BYU student, Holland went on to add his desire for a balance between compassion and adherence to the principles and commandments of the church.

â€œBut it will help everyone to provide such help if things can be kept in a certain proportion and a balance in the process. For example, we must be careful that love and empathy are not interpreted as excuses and pleas, or that orthodoxy and loyalty to principles are not interpreted as meanness or disloyalty to the people. As far as I know, Christ never refused his love to anyone, but he never once said to anyone: â€œBecause I love you, you are exempt from keeping my commandments. We are tasked with trying to find that same sensitive and demanding balance in our lives. “

Elaborated: Washington Pulls Out of Just Transition, with Joe Uehlein