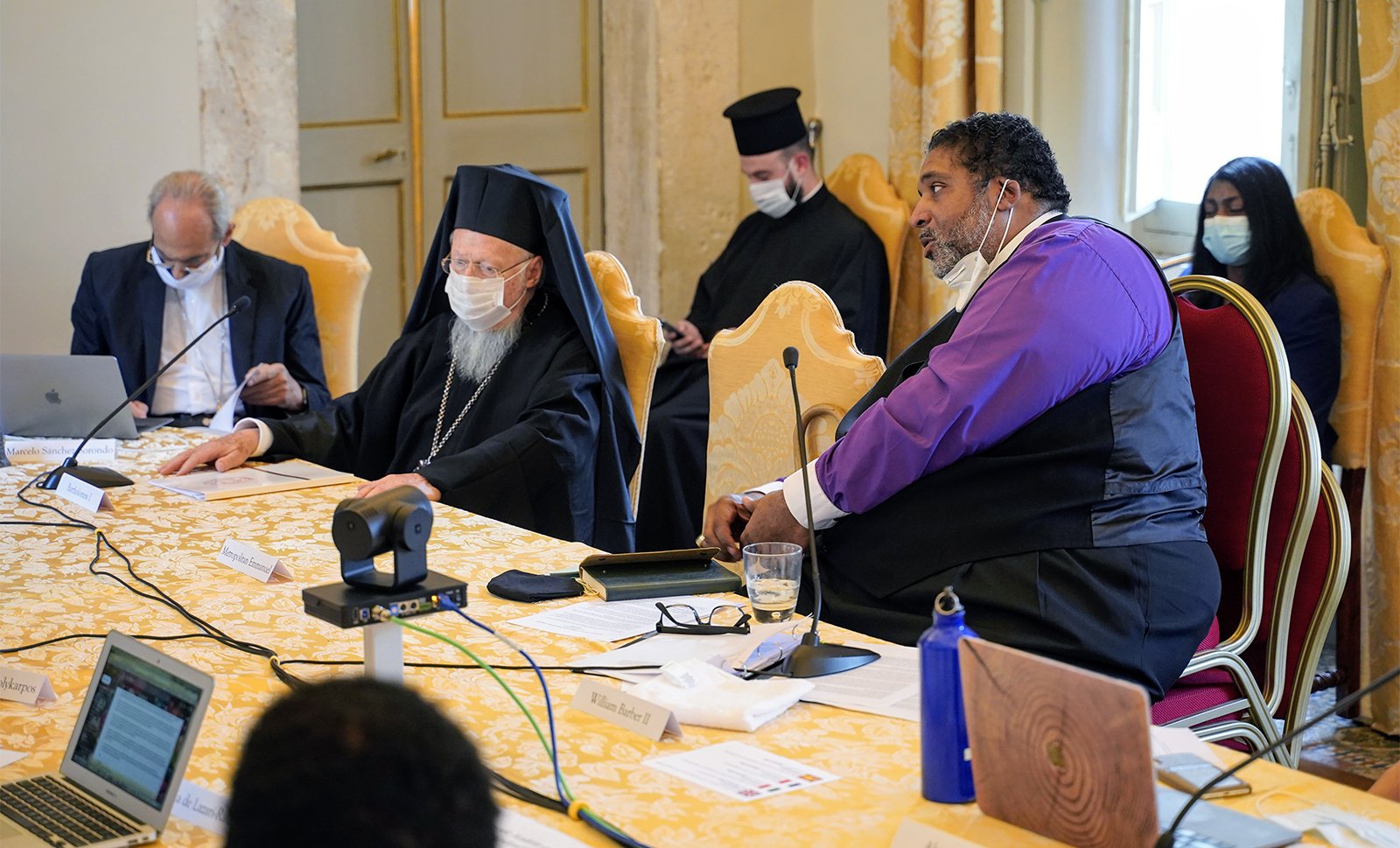 VATICAN CITY (RNS) – Pope Francis condemned greed and the ruthless pursuit of profit in a message sent to a Vatican conference on poverty on Sunday (October 3), offering his spiritual perspective on economic matters to a group of economists and religious leaders that included prominent American activist Reverend William Barber II.

“We can be very attached to money, own a lot of things, but in the end we will not take them with us,” the Pope wrote, according to a Spanish version of his written message. “I always remember what my grandmother taught me: ‘The shroud has no pockets.'”

Francis sent the remarks to those who gathered in the Vatican for the two days conference on “Caritas, social friendship and the end of poverty”, organized by the Pontifical Academy of Social Sciences.

In his message, the Pope denounced global economic inequalities between countries and within national borders, claiming that the ultimate effect “has a negative economic, political, cultural and even spiritual impact”. In order to counter such tendencies, he invoked the biblical statement “happy are the poor in spirit”, explaining that the true “spirit of poverty” should lead believers to use wealth and resources for “the common good, social justice. and the care and protection of our common home.

“The owners of property must use them in a spirit of poverty, reserving the best part for the guests, the sick, the poor, the old, the destitute, the excluded; who are the face, so often forgotten, of Jesus, whom we seek when we seek the common good, ”wrote Francis. “The development of a society is measured by the ability to urgently help the person who suffers from it. “

The Bishop of Rome concluded by calling for a worldwide movement to “limit all activities and institutions which, by their own inclination, tend only to profit, in particular those which Saint John Paul II called” structures of sin. “.

Francis’ message was well received by Barber, a prominent activist who co-chairs the denominational campaign for the poor and challenged Republican and Democratic lawmakers to do more to fight poverty in the United States.

Barber referred to the Pope – particularly his 2020 encyclical “Fratelli tutti” – in his own address to the conference on Monday. Barber’s speech, titled “Building a Coalition and Bringing Religious Communities Together to Alleviate Poverty,” also alluded to the namesake of the Pontiff Saint Francis, whose Catholic feast day coincided with Barber’s speech.

“Whereas Francis once roamed this land proclaiming the good news to the poor, the poor and the rejected of my country walk and sit down today to announce the good news that a moral economy is possible in our time”, said Barber, according to his preparation. Remarks.

Campaigners of the poor have spent years protesting for legislation they say will help poor and low-income families, but stepped up their efforts in 2021. The group has staged a series of protests in Texas, Arizona, Washington, DC and other locations throughout the summer. They were intended to pressure Democratic lawmakers to adopt a list of liberal-leaning proposals regarding voting rights and raising the federal minimum wage, among others. A peaceful protest outside the United States Capitol resulted in hundreds of arrests, including barber and civil rights icon Reverend Jesse Jackson.

In a separate interview with Religion News Service, Barber said attendees at the Vatican conference were aware of the backsliding campaign of the poor and others against Sense. Joe Manchin and Kyrsten Sinema, the two Democratic lawmakers who are currently blocking many liberal economic proposals.

He said, “People look at the actions of Sinema and Manchin and think, ‘What is in the world?

In his speech, Barber also appeared to echo Francis’ call for a global movement to end poverty.

“The church must have a prophetic moral outcry and must help foster a different way of seeing the world,” the Disciples of Christ minister said. “A movement with poor and low-income people, religious leaders, moral servants, and academic social rights defenders must spark a keen moral imagination. “

Barber said his plans for a poverty-focused mass march in Washington, DC next June sparked an explosion of enthusiasm among conference attendees, whom he cited as repeatedly referring to the current state of poverty in the world as a sin. After mentioning the march in his speech, Barber said attendees from other parts of the world have expressed interest in hosting similar events in their countries.

Conference participants also plan to issue a letter to the G20 summit scheduled for Rome at the end of October.

“The good thing about being at a global table is that even though I’m from the United States, what we see is that the poor all over the world face the same obstacles, the same challenges, to the same kind of regressive political actions, ”he told RNS. “This is why there is such a need for low income people around the world to have solidarity, to have a movement and, if you will, a global campaign of the poor. “

Barber was invited to the Vatican by economist and conference co-host Jeffrey Sachs, whom the activist described as a “big supporter” of the Poor People’s Campaign. Sachs has praised the movement in recent months, describing as “the Lord’s work,” a poverty-focused US House of Representatives resolution that the campaign helped bring to lawmakers in May.

The North Carolina pastor tweeted a photo of himself alongside Sachs on Sunday under the caption: “As the church celebrates the feast of St. Francis, I’m grateful to be in the Vatican with my brother Jeffrey Sachs to talk about the prophetic role of religious leaders in God’s work to end poverty.

As the church celebrates the feast of Saint Francis, I am grateful to be in the Vatican with my brother Jeffrey Sachs to talk about the prophetic role of religious leaders in God’s work to end poverty. #PoorPeoplesCampaign pic.twitter.com/IWez9jtxZv

Sachs, who is director of the Center for Sustainable Development at Columbia University, has been a recurring speaker at Vatican events under Francis, particularly at the Pontifical Academy of Social Sciences, where he led discussions on climate change. and sustainability. Long popular in many liberal circles, his vocal concerns about overcrowding – combined with his warnings about the “absolutely dangerous” repercussions of Trump’s re-election – have made him a controversial figure among conservative Catholics.

Sachs, a former UN climate adviser, was also present when Senator Bernie Sanders met the Pope while running for president in 2016.

In addition to Barber’s efforts to convince members of Congress to adopt an anti-poverty agenda (particularly Manchin, himself Catholic), last week the religious activist and other poor campaign officials publicly requested a meeting on the subject with another prominent Catholic Democrat: President Joe Biden.

It remains to be seen whether Biden, who has supported the poor campaign in the past, will take the meeting with Barber, who preached at the president’s inaugural prayer service. But even if Biden passes, he may not be able to avoid the discussion of faith and poverty this month: he is rumor to plan a meeting at the end of October with Pope Francis.

Getting To Clarity, LLC, A Public Speaking And Consulting Firm, Launches New Podcast