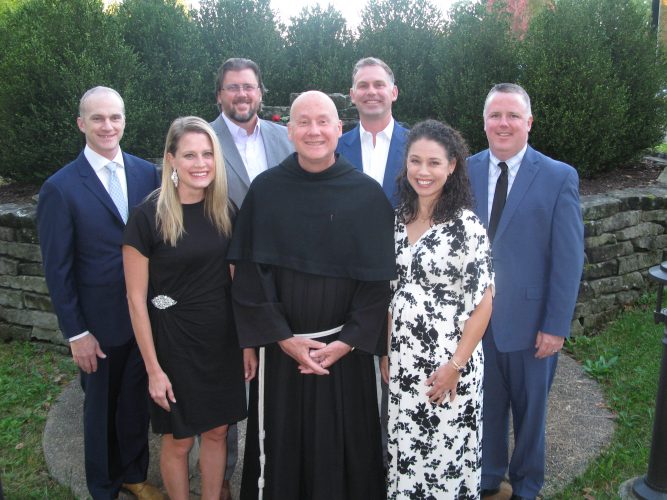 RECOGNIZED ALUMNI – Several graduates of Franciscan University of Steubenville were honored for their accomplishments at the school’s 32nd annual alumni awards banquet on Friday, which was part of its back-to-school festivities this weekend. Present for the occasion, from left to right: Rebecca Rook, President of the Alumni Awards Committee; the Reverend Dave Pivonka, TOR, president of the university; and laureate Dr. Marlo Cavnar Vernon; and back: Fellows James Campbell, D. Shawn Salamida and Brian McCarthy; and Tim Delaney, executive director of elders and voter relations. Former students Martha McMenaman Reichart and Edward Wamala were also honored. – Warren Scott

STEUBENVILLE – Whether it’s working for the good health of mothers and infants in the United States or helping young people abroad get an education, the efforts of several former students of the Franciscan University of Steubenville were recognized at their annual Alumni Awards Banquet on Friday.

The event is part of the school’s reunion festivities this weekend.

University President Reverend Dave Pivonka, TOR said one of the best parts of his job is talking to and getting to know Franciscan graduates, many of whom enjoy going back to school for a variety of reasons.

He noted that many have been successful in their fields and in their Christian ministry in the United States and abroad.

“It gives you a feeling of global mission, that we are sending people all over the world”, Pivonka said.

Reichart, a 1992 graduate, received the Bishop John King Mussio Award, which is awarded for faithful service to the church through vocation ministry.

said Reichart had drawn inspiration from the teachings of Saint John Paul II on the dignity of women to become a founding member of the board of directors of Endow, an organization that works to transmit to women on all continents their value and inherent dignity. She was also president of Endow for four years.

Reichart also developed an outreach program for women at Samaritan House, a 450-bed homeless shelter run in Denver by Catholic Charities. There, she read the Letter to the Women of Saint-Jean-Paul to Prostitutes, Victims of Domestic Violence and others who have walked through the doors of the shelter every week for four years.

She is a trustee of the Augustine Institute and Thomas Aquinas College and has served various other organizations including FOCUS, Creatio, KATALYST, the Missionaries of Charity, and the Becket Fund for Religious Liberty.

Vernon, a 2001 graduate, received the John J. Carrigg Award, which is awarded to alumni who have distinguished themselves in the field of education.

As a student at Franciscan, Vernon became interested in helping mothers and babies through preventive health. She then obtained a master’s degree in public health, with a specialization in maternal and child health; and a doctorate in applied health sciences.

For nearly 20 years, she has researched and taught measures to prevent obesity, suicide, drug addiction, and cancer, among other health issues.

In 2018, she was one of four finalists in a national competition in which the Office of Maternal and Fetal Health challenged participants to develop a tool to help women monitor their pregnancy.

She chairs the board of directors of Hope House Inc., a non-profit organization that allows women to stay with their children while receiving residential drug treatment.

Salamida, a 1992 graduate, received the Father Dan Egan Award, which is awarded to alumni for their leadership and achievements in health care, social services or life sciences.

Salamida has worked in mental health and child protection for over 20 years and is the President of Behavioral Health Services at the Lakeview Center in Pensacola, Fla., Where he leads 650 employees.

This is one of many leadership positions he has held in behavioral health and child welfare agencies.

Salamida’s first exposure to the child welfare system came as she was growing up among 10 siblings, 7 of whom were adopted into foster care.

Salamida has become known for bringing together representatives from many foster care agencies to successfully advocate for changes in Florida’s innovative child welfare system.

Earlier this year, he was appointed by the Florida state legislature to its new state commission on mental health and addiction.

He worked in the software industry for 20 years, as Vice President and Director of Sales for several companies, and is currently Director of Revenue for Rubrik Inc., a cloud data management company.

McCarthy attributes his training to the Franciscan, where he majored in theology and history, for his ability to get people to work together and want to live Christian principles at work and in his family life.

He mentored other Franciscan graduates and served on the university’s board of trustees and the board of Vagabond Missions.

After earning an accounting degree at Franciscan, Campbell embarked on a career in banking, working for Credit Suisse, BNP Paribas and the Layton Road Group.

In 2007, he volunteered with Santa Maria Del Fiat, a religious group that ran a school and home for abused and neglected children in Ecuador, and upon his return to the United States, he established the charity Mission Santa Maria to support his efforts.

Finding the bank unsatisfactory, he felt called to move to Ecuador, where he uses his financial skills to raise funds for the full-time mission.

The mission provided several hundred scholarships to enable young people at the children’s home to pursue a college education in 2020 alone, as well as funding for water supply systems and other home construction projects.

Wamala, a 2017 graduate, received the Outstanding Young Alumni Award, which is given to past decade alumni who have distinguished themselves academically, professionally, or through outstanding community service or personal achievement.

Before coming to Franciscan, Wamala helped the poor in her home country, Uganda, and took care of three abandoned children.

As head of the Worship Festivals, he got to know many people at university, where he obtained a bachelor’s degree in business administration. From there he returned to Uganda, where he co-founded and led the Bugumiro Foundation Uganda, which supports a school, spiritual and educational retreats for the community, hands-on training for adolescents and young adults, and educational sponsorship of several. dozens of children.

As president of the foundation, Wamala oversaw the construction of a children’s home and multipurpose hall, with classrooms and a chapel, among other efforts.

The latest news today and more in your inbox

How black churches are promoting vaccines in New York