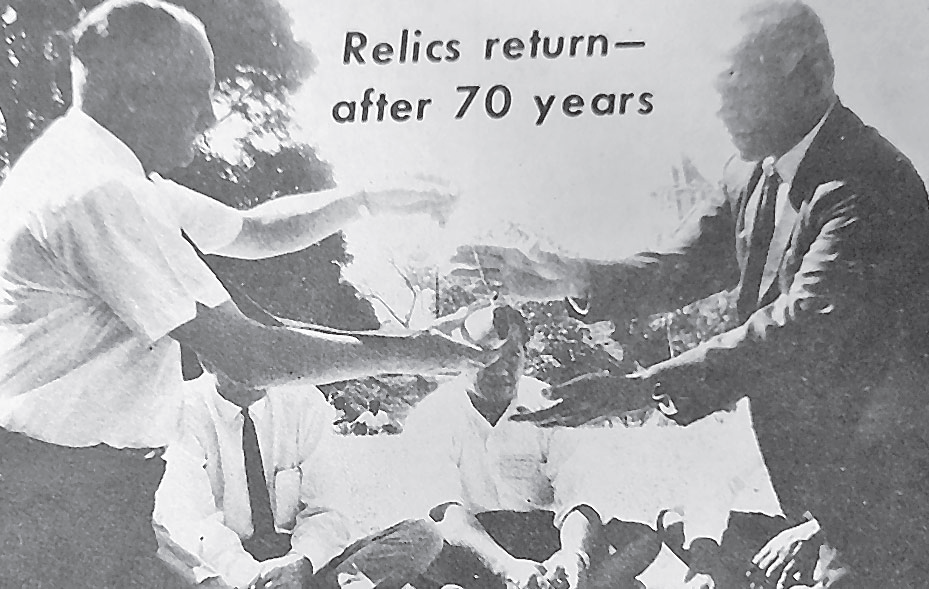 The Fiji Times »Relics returned to church after 70 years

Finding revered objects of historical and religious significance simply opens doors to past existences that were once unknown. It allows for a better understanding of the story which is then recorded for future reference.

On Thursday, May 6, 1971, an article was published by this newspaper on the presentation of important relics religiously linked to the Methodist Church in Fiji.

The relics that came from the murder of a Methodist church missionary were returned after 70 years. The relics were the remains of the boots of Reverend Thomas Baker who was killed and eaten by cannibals in 1867 and a tabua.

Mr. Baker and seven of his supporters were ceremoniously killed and eaten at Naqeledelainivatu on the Waimanu River on July 13, 1867.

The villagers along the river had been ordered by Tui Navuso to kill Rev. Baker and his group, but they refused to obey the order until the group reached Naqeledelainivatu. The people of Navuso presented the tabua to the interim president of the church’s synod, the Reverend William Slade in 1899 as an atonement offering for their part in the murder.

When Mr. Williams returned to New Zealand two years later, he took this tabua with him, but church officials say they were unaware he also collected the remains of Mr. Baker.

“For 70 years they were believed to be lost until Dr William Slade, son of Mr Slade, wrote to Fiji museum director Bruce Palmer to offer them for the exhibition,” said a spokesperson. word of the church.

He said the relics were due to be presented to the Fiji Museum in a ceremony at the church conference in about two months.

The Fiji Museum in its Virtual Museum pointed out that the early European missionaries in Fiji were often vilified and threatened during the first decades of their mission. who were killed by followers of the ancient Fijian religion, especially after Christianity began to take hold in Fiji, threatening the authority of chiefs and bete (priests).

In the wake of revealing and disturbing emails, the NFL and its owners must open their minds and mouths – The Athletic