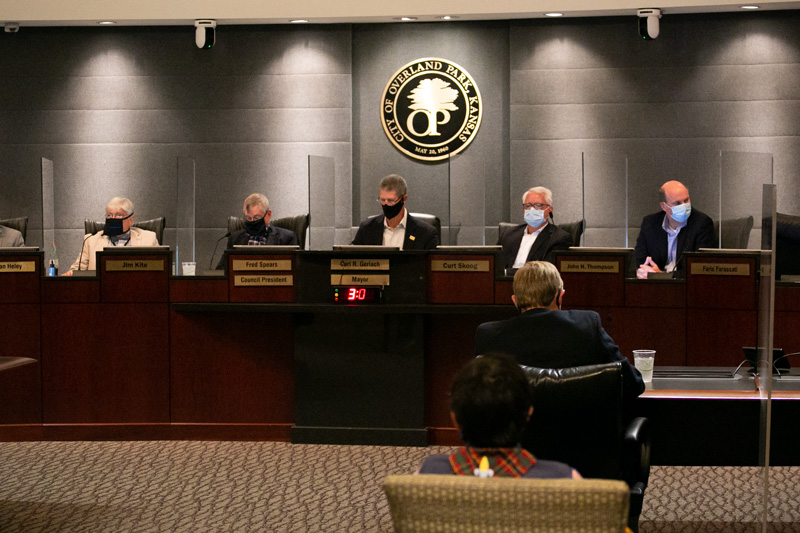 Candidates for the City Council of Wards 4, 5 and 6 of Overland Park on the issues: Fellowship and collegiality

In August, we asked our readers what questions you wanted to hear from the candidates running for the Overland Park City Council speech.

Based on your feedback, we have developed a five-point questionnaire that addresses the issues most important to the citizens of Overland Park.

Each day this week, we’ll be posting contestants’ answers to one of the five questions. Today we are posting the candidates’ answers to the following question:

There appears to be growing animosity and tension among members of Overland Park City Council itself. While allowing for divergent views and disagreements, how would you help restore a general sense of respect and decency within the Council in order to benefit the common good of Overland Park?

Below are the responses the Post received from applicants on the issue:

I have served on many boards, committees and teams during my career and all have included a diversity of views and approaches to problem solving. I have now served on Council for about 16 months and joined it without having any prior relationship with the Mayor or Council members. In my experience, the majority of Council members represent their constituents well. They approach issues with an open mind, do their research and talk to their constituents. Although we may have different points of view, there is a willingness to talk to each other and listen to the ideas of others. However, there are two members who take a different approach and this has caused some tension.

In my opinion, good governance occurs when leading members talk to each other, follow established processes for raising new ideas, and communicate with each other and with city staff respectfully at all times. There is a lot of room for differing opinions. I have agreed with and against all Council members on several occasions, but I still have a very good working relationship with almost everyone. To improve the situation, I think the Council should organize a retreat next year, with a facilitator experienced in teamwork. The Council has held such retreats in the past, but not since the start of the pandemic, so several members, including myself, have attended. The Board could also benefit from additional training on process and procedure, so that we are all on the same page as to how matters are brought to Committees and to the Board. Finally, I encourage all residents to watch at least one board meeting to see how your board member represents you. You can watch live in person or online or watch the recording later. If you think your board member is not approaching the role in the way that best represents you, let them know.

This question came up several times because the majority of the 10 yeses believe that the 2 non-dissenters have neither an opinion nor a vote! They even went to the Star! I can give many examples where the 2 nays say “wait”, the citizens want it and the 10 yeses say they do not know what is going on or that their numbers are wrong, and so on. feel the information shared. Let’s be honest, it’s just the same 5-6 or more who seem to know it all, but 10s seem to be voting en bloc! (Look who contributes to each candidate’s campaign) I imagine the 2 and the public never seem to listen to what’s important! I’m thinking of Chipseal and 69 tolls! A camera system at the football complex is really obvious!

My observation is that when people disagree with the majority, they are discussed, ridiculed and scolded like children! This is the same group that criticizes others for simply asking questions! I shared a video of this on Facebook if anyone wants to see what I mean? You can see the same attitude reflected in the House and SMP forums in recent weeks from incumbents. Watch the exchange in Ward 6 regarding dollars spent on the arboretum. The incumbent got angry and attacked his opponent about the amount of taxes spent, stating that he had wrong numbers and that what he was saying was wrong! Then the opponent politely reread the numbers straight into the city’s newsletter! This is what I see systematically. Where is the problem, can you see it! Dissent, yes, but not where some try to say. Current board members do not like to be interviewed. This is the nature of the service they provide! Now is the time for change, for open-mindedness and for people who put people first. All opinions matter, don’t they?

The only way to change this advice to wrestling is to replace those who get angry with different opinions! It’s not personal, just different opinions. I don’t agree with giving tax breaks to developers, but others don’t. There is no reason to get upset with it and when it is pointed out they get defensive and their behavior changes and they attack, instead of looking for why there is a different perspective. They just lose sight of what’s important. It becomes personal and no progress is made. We need open minds, people who hear and act, not just those at the top who know everything.
We need some new advice to move forward!
Time for ideas and inclusion!

Overland Park was built on partnerships and collaboration. Every member of the council is elected by the voters to represent the city and we need to get back to that vision. We don’t always have to agree, but we have to be respectful in our work. I’ve read the stories about some of the turmoil on the board and to be quite frank, that idea almost made me not run for this job. I like working with high performing teams and the number of dysfunctions that I had read worried me enormously. As I dig in and ask questions to find out more, I think there are a few key points. It is believed that part of the tension arose from the fact that at least one of the candidates was trying to step up his campaign for mayor, and hopefully this will naturally subside with the end of the elections.

Second, I have a long history of working well with others and helping to resolve disagreements amicably. If elected and the animosity continues, I would bring two key elements to restore respect and decency. Initially, I approached anyone acting disrespectfully individually to better understand the situation and help define more positive steps that could be taken. If these actions continue, they should be politely and professionally denounced and flagged as unnecessary distractions that undermine the overall effectiveness of the board. I have found that most people back down when called in a proper and professional manner. Finally, if the lack of decency persists, I would be open to pursuing censorship or other forms of action to make it clear that this type of behavior does not belong to the council.

After watching / attending dozens of city council meetings, I agree that there is a noticeable level of animosity and tension that has built up over the past year. It has reached an uncomfortable level to watch, especially when a vote is required.

Whether the root cause is frustration at not being heard, a lack of respect, a difference in personality, or a lack of direction, we need a strong leader who can effectively lead the team. direction of our city. Our mayor must set the tone and expectations at council meetings and foster a team spirit, even within a diverse team.

Over the past 25 years, I have successfully assembled and led many cross-functional teams to develop and implement strategic programs. The time invested in building relationships with team members, the experience I have in creating and measuring goals and the positive attitude I bring to the city leadership team will accelerate the restoration of respect and cohesion within the municipal council. Our residents deserve and should expect a cohesive, successful and unified city council.

I am not aware of any animosity or tension among the current board members. Most of the time, when we don’t agree, we work together to find a solution that can satisfy all parties. I learned early on that if you want to accomplish anything you have to go through the board process and you need 7 votes. For me, that meant it was up to me to build trusting relationships with my colleagues so that I could convey issues in a meaningful way.

The frustration you feel from time to time among board members is that some of our colleagues have not prepared for the meetings or, if they do not agree, they do not want to propose a proposal. alternative solution. I welcome disagreement because it is part of a healthy democratic discourse, but when I am against something or want a change to happen, I have to come up with a solution.

A good example is the issue of replacing the fence around the West Links golf course that separated 80 houses from Nottingham by the Green. This fence was on the PO’s property and staff wanted it removed as it was deteriorating. I considered this as OP was the owner and had the right to remove the fence. The homeowners association wanted OP to fund a new wrought iron fence at a cost of $ 400,000, which I think is an excessive expense for the city that did not benefit the taxpayers.

I was persuaded by a colleague of mine, who agreed, that since the golf course is like a park, we should, at a minimum, spend the money to put up a chain link fence and see if the neighborhood would pay the rest for it. move on to a wrought iron fence. Ultimately, the neighborhood and town compromised where the town would absorb 60% of the cost, and the 80+ houses would accept the remaining 40% and be responsible for maintaining an improved wrought iron structure. I was happy to vote for this compromise to satisfy all parties.

My contribution to resolving this issue is that I will do my best to focus my comments on personality issues and avoid personal attacks and / or unprofessional conduct. Having said that, I feel compelled to comment on what I believe is a one-sided view regarding the causes of recent animosity and tensions within city council. The current mayor and many longtime city councilors have been on their way for a very long time – and developed very thin skin when challenged. They often treat residents with disrespect when they receive a petition, as I felt an arrogant and condescending attitude from this organization when I spoke to them last year.

On Tuesday, we’ll post the candidates’ responses to question # 2: