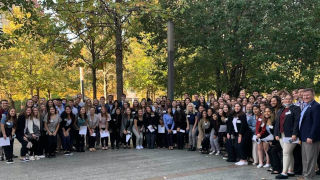 â€œThe theme of the first year of our program is ‘Leading Yourself’. I can’t think of any better place than this holy ground to think about what kind of life you want to live and what kind of leader you want to be. “

Price, who first visited the museum when it was still just a construction site in 2013 as director of the Counterterrorism Center at West Point, took cadets, officers from the Army, Seton Hall leadership students have visited the museum and memorial since. .

Students at the National September 11 Museum

Price added, “It’s a one-of-a-kind experience that speaks to us on a human level. It doesn’t matter what profession you want to go to, what academic specialization you’re studying or your politics. It’s a visceral experience that leaves people changed after their visit. “

For Olivia Kreider, a freshman at the College of Nursing, the trip was of personal importance. â€œMy uncle was at the Pentagon on September 11 when the plane hit,â€ Kreider said, â€œand I remember growing up knowing this fact but not really understanding it. When I went to the 9/11 museum, we m ‘showed so much more than I heard when I was a child.The trip to the museum is a day that I will never forget.

To begin their visit, Price divided the students into 14 groups to locate the 14 victims who had Seton Hall affiliations among the 2,977 names on the signs surrounding the two reflective pools. Students are responsible for locating each name, taking a photo with their group at that panel, and searching for that person. All of the students then bonded and shared something special about each victim in Seton Hall with the group.

The story of Spade is heartbreaking but captivating. He is the sole survivor of Rescue 5, Staten Island’s only rescue team. Spade was on duty after the team was called in with a routine gas leak earlier in the morning of September 11. When he got the call about the affected Twin Towers, Spade went down to the World Trade Center to meet his team. Although he never joined them on the spot, Spade teamed up with other first responders to get people out of the towers. He narrowly survived the fall of the second tower and was hospitalized for three days. It was at the hospital that Spade learned he was the only survivor.

Spade’s story had a personal impact on Maggie Iannella, a Point Pleasant, NJ freshman studying nursing. â€œHearing Bill Spade tell his story was truly an eye-opening experience. I’ve heard survivor stories second-hand and in articles, but I’ve never had the chance to hear a survivor story like this before. Spade’s story was awesome. special to me and I really hit home because my dad is also a firefighter. “

After hearing several inspiring leadership stories from Rauch and Spade’s emotional tribute, the students then toured the museum for the remainder of the day before returning to Seton Hall.

â€œIt’s a day they will never forget,â€ Price said. “My hope is that they use what they have learned here to become the leaders they want to be led by.”