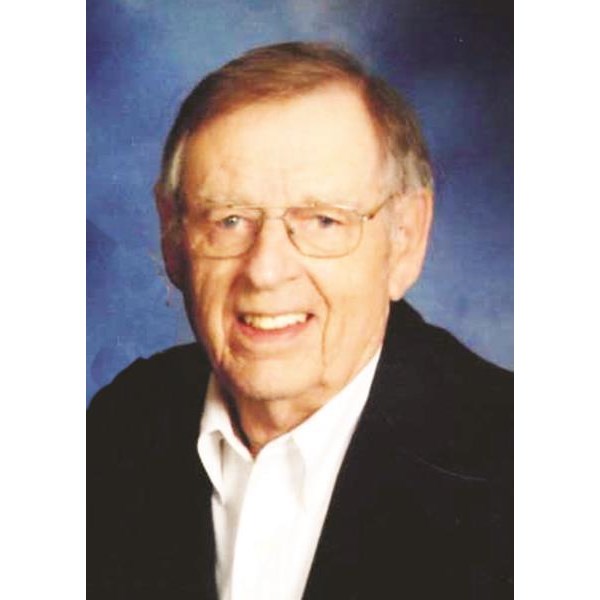 Dale Euchner, 91, of Columbus, died Sunday, November 14, 2021 at his home in Columbus.
Dale W. Euchner was born January 21, 1930 in Waterloo, Iowa, to William and Alice (Bonnason) Euchner. He was baptized on August 23, 1931 at the First Lutheran Church in Waterloo and was confirmed on August 19, 1945 at the Zion Evangelical Lutheran Church in Hudson, Iowa.
Dale graduated from the Hudson Consolidated School in 1948. After graduation, he joined the United States Marine Corps, where he served for four years and was discharged as a staff sergeant. After his release he owned and operated a grocery store in Hudson. Meanwhile, Dale enrolled at Iowa State Teachers College. After selling the store, he transferred to the University of Iowa where he earned a Bachelor of Science in Business with a specialization in Industrial Relations.
Dale joined GTE in 1957 and was assigned as District Business Manager in Columbus. Subsequent assignments included those of Personnel Assistant and Director of Personnel for GTE Midwest operations spanning the states of Nebraska, Iowa, and Missouri, with its headquarters located in Grinnell, Iowa.
Dale and Elaine Muhle were married on September 13, 1958 at his family’s St. John’s Lutheran Church (Shell Creek) north of Columbus.
In 1963, Dale transferred to GTE Illinois as the Resident Personnel Manager in Bloomington, Illinois. In 1973, he transferred to the Stanford, Connecticut headquarters and assumed the position of director of personnel planning. Subsequent positions included the Director of Executive Placement and Director of Executive Workforce Development, responsible for identifying candidates for 26 President positions.
In 1978, Dale assumed the role of Regional Director of Staffing and Development for a new Southern Region headquarters located in Irving, Texas, a position he held until his early retirement in 1982. when he moved his family to York.
While at GTE, Dale participated in many civic and professional activities, including the positions of District Director and Regional Vice President of the American Society for Personnel Administration; chairman of the staff committee of the Illinois Telephone Association; president, McLean County Association for Retarded Children; and Fire and Police Commissioner for the City of Normal, Illinois.
Dale was active in York. He was a member and past president of the York Sertoma Club, a past member and past president of York United Way, and was York County Commissioner for five and a half years.
Upon arriving in York, Dale owned and operated ServiceMaster of York for five years. He then worked part-time at True Value Hardware for approximately 15 years.
In 2013, Dale and Elaine sold their land in York and moved to Columbus to be closer to Elaine’s family. Both became members of the Lutheran Church of Peace.
He remains to be cherished in memory of Dale, his son, David Euchner of Lincoln; grandchildren, Mykahla, Rebekah and Brenna Euchner of Orlando, Fla. and brother, Glenn Euchner of Harlan, Iowa.
Preceding Dale in death were his parents, William and Alice Euchner; wife, Elaine Euchner; son, Brian Euchner; daughter, Debra Euchner; brothers, Marion Euchner and Norman Euchner and his sister, Marlys Greening.
Condolences can be sent to www.gasshaney.com.
The funeral will be on Monday, Nov. 22 at 11:00 a.m. at the Lutheran Church of Peace with Reverend Cory Burma, and military honors will be bestowed by Honor Guard Hartman Post 84 of the American Legion. Visitations will be on Sunday, November 21 from 2 p.m. to 5 p.m. at the Gass Haney Funeral Home in Columbus and will continue on Monday from 10 a.m. until the time of church service. There will be a family prayer service on Monday at 10:45 am at the church. Interment of the family will take place at Calvaire Cemetery on Monday, November 29 at 1:30 pm Memorials are suggested in the Peace Lutheran Comfort Dog program.