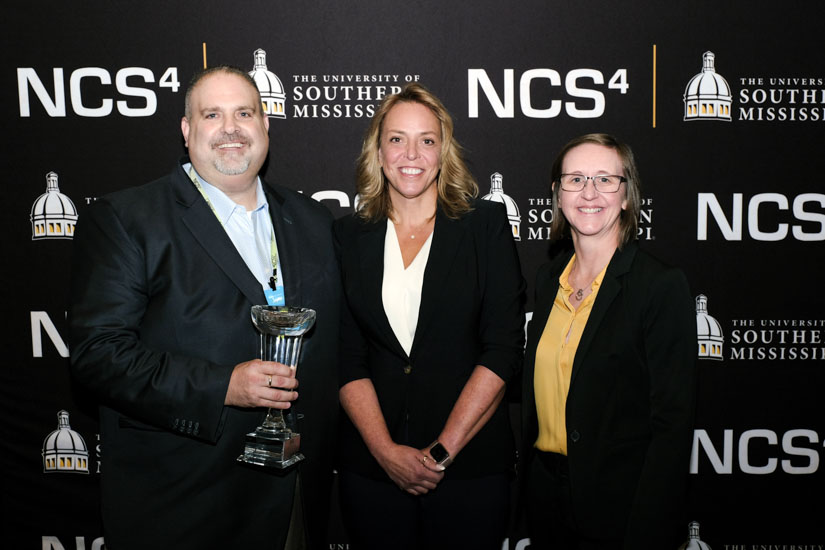 Jim Mercurio, Executive Vice President of the San Francisco 49ers and General Manager of Levi’s Stadium, received the Milton E. Ahlerich Distinguished Leadership Award at the National Sports Safety and Security Conference & Exhibition Awards Luncheon on November 10 . The event is presented annually by the National Center for Spectator Sports Safety and Security (NCS4) at the University of Southern Mississippi.

The Milton E. Ahlerich Distinguished Leadership Award recognizes a professional whose career includes multiple accomplishments and contributions to the safety and security of sport. The recipient’s service, commitment, ingenuity and integrity must have elevated the profession to new levels to justify this prestigious honor. The recipient of the award is selected by a panel of subject matter experts on behalf of NCS4 and given annually at the National Sport Safety and Security Conference and Exhibition.

â€œI am not only touched, but truly honored to receive the Distinguished Leadership Award,â€ said Mercurio. â€œI’m pretty proud of the family we’ve built over the years with the 49ers and Levi’s Stadium, so I’m accepting this award on their behalf as well. Special thanks to the NCS team4 and to those who attended the conference last month. It was great to see so many peers from across the industry.

In his 28e year with the 49ers, Mercurio oversees all aspects of stadium and event operations, including executive oversight of catering operations, engineering, grounds, customer services, concierge services, operations and logistics, as well as parking and transportation. In addition, he manages all police, safety and security and medical services on match and event days at Levi’s Stadium.

During his tenure with the 49ers, Mercurio became an NFL leader in stadium security and management. He developed the emergency stadium evacuation video for the 49ers which has since been reproduced by arenas and stadiums affiliated with the NFL, MLB, NBA, NHL and NCAA.

In August 2005, Mercurio assisted officials in the California Department of Homeland Security with the first Large Stadium Initiative (LSI) program. Having participated in the development of best practices for NFL security, he has introduced to security and operations professionals affiliated with major stadiums and arenas in the state of California.

â€œJim is a distinguished figure in the field of sports safety, and we are grateful for his contributions to the industry,â€ said Dr. Stacey A. Hall, NCS4 Executive Director and Professor of Sports Management. â€œHe worked with the NCS4 for many years, helping with training programs and outreach services, and is a long-standing member of our National Advisory Board. His on-the-ground experience and knowledge provides relevant information that assists his fellow league members and the broader safety and security community in professional sport and entertainment. ”

Under Mercurio’s leadership, Levi’s Stadium has gained international recognition, including the prestigious Sports Affairs Journal 2015 Sports Facility of the Year Award. The stadium received the SECURITY for Science and Technology Act designation from the Department of Homeland Security in 2016. The stadium also received the Facility of Merit by the NFL and the NCS.4 in 2017 for his efforts in achieving beyond normal operations to demonstrate an innovative approach to improve safety and security.

Mercurio received the prestigious NCS4 Professional of the Year Award in 2016, which recognizes a professional in the field who has improved site safety and security operations.

The 13the The annual National Sport Safety and Security Conference and Expo is scheduled for June 28-30, 2022 in Orlando. Registration opens soon. For more information visit
ncs4.usm.edu/conference.

About the annual conference:

The 12e The annual National Sport Safety and Security Conference and Expo was held in Phoenix at the JW Marriott Desert Ridge Resort and Spa on November 9-10. The conference attracted over 400 attendees and 60 exhibitors representing safety and security professionals in professional sports leagues, intercollegiate athletics, interschool athletics, marathon and endurance events, and athletic facilities. and entertainment, as well as those who provide security and safety products and services to industry.

Established in 2006, the National Center for Spectator Sports Safety and Security (NCSâ´) is the only academic center in the country dedicated to the study and practice of sports safety and security. SNC4 is partially covered by grants from the Department of Homeland Security (DHS) and the Federal Emergency Management Agency (FEMA). SNC4 The mission focuses on three key pillars: training and education, research and awareness. For more information on NCS4, call 601.266.6183 or visit ncs4.usm.edu.