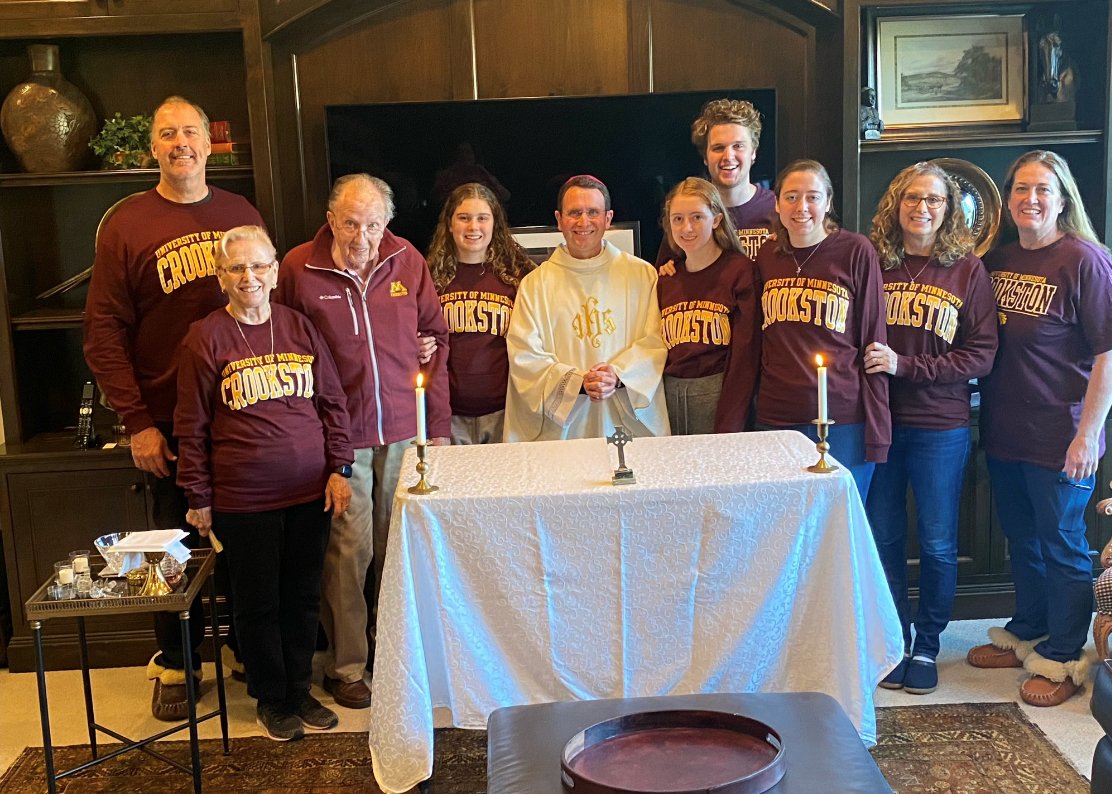 CROOKSTON, Minnesota – At a family reunion days before her son’s installation on December 6 as the eighth bishop of the Diocese of Crookston, Judy Cozzens of Plymouth, Minnesota, spoke about how Bishop Andrew’s life H. Cozzens had a difficult start.

She went into labor five months after the onset of pregnancy. Doctors were able to stop labor, but did not offer an encouraging prognosis.

â€œHer life started with a great amount of prayer,â€ Judy said. Our Diocese of Northland, the diocesan media of Crookston.

Until the age of 10, his diet was limited to 12 foods. It meant bringing your own meals to birthday parties, including Rice Krispies bars to eat when the other kids had cake and ice cream.

â€œSome people would pity Drew, but his father and I always reminded him that his allergies made him strong. He learned at a young age that you don’t have to have everything to be happy, â€said Judy.

She believes these lessons have helped her prepare to accept her vocation to the priesthood.

“Although he loves children and would have been a wonderful father and husband, he had the strength to sacrifice marriage and family to serve the Lord’s family and bring us the Lord’s mercy and the Eucharist”, said Judy.

Cozzens is the youngest of Jack and Judy’s children. Her older sister Helen lives in Long Lake, Minnesota, with her husband, Tim. They have seven children and two grandchildren. Their eldest daughter is from the Handmaids of the Heart of Jesus, a religious order based in New Ulm, Minnesota.

When Andrew was 10 and Helen 13, their family welcomed a 15-year-old adopted brother, Sergei Thomas.

Helen said when Sergei, an African American from downtown, joined their family as a freshman in high school. He was extremely intelligent, but had a GPA of .9. At graduation, her GPA was over 3.0.

â€œThis is what the family can do,â€ said Helen.

Sergei is now a lawyer in Denver and has two sons.

Judy and her husband have tried to ensure that their children have personal relationships with priests and religious by frequently inviting men and women of faith to dinner and to spend time with the family. She said they also encouraged their children – and now their grandchildren – to seek God’s will for their future.

â€œAsk God what he wants. If you follow the will of God, you will be happy, â€Judy said.

She said the future bishop was a very normal growing child. He enjoyed skiing, hiking and being outdoors. He also sang in a select choir, participated in school plays, and played a leading role in his school’s Key Club.

Andrew was recognized by a local Denver TV station for his high school service work.

â€œThey asked him what he considered his most important achievement in high school,â€ Judy said. â€œHe replied that he had been involved in teaching swimming to students with special needs every Friday night for a few years in high school. He felt his greatest achievement was when his swimmer won a gold medal at the Special Olympics.

His time spent in the summer on his uncle’s farm in Montana gave Bishop Cozzens an understanding and appreciation of agriculture and rural life, his mother said.

â€œHe was just a freshman when I was a senior, but he helped me with my theology papers and I let him use my car,â€ said Helen. Their relationship at college has grown from simple siblings to good friends.

After college, Helen served as a missionary with National Evangelism Team Ministries, known as NET Ministries. She wrote to her brother about everything she was learning about the church and how to live and share the Catholic faith. His team even spent time leading retreats in Kansas where he got to meet them.

After graduation, Bishop Cozzens served as a NET missionary and the team he was assigned to traveled to the Diocese of Crookston to lead retreats.

He was also a member of St. Paul’s Outreach and led Bible studies. His faith led him to join the Companions of Christ, a brotherhood of diocesan priests in St. Paul.

â€œBishop Cozzens has given thousands of homilies, but none compare to the one he gives in his life,â€ said Helen. “I saw my brother give his life to Christ and how God used it in a powerful way.”

Helen remembered how her brother was appointed Auxiliary Bishop during a difficult time in the Archdiocese.

â€œClergy abuse has taken a heavy toll on my brother’s service in St. Paul and Minneapolis,â€ she said. â€œHe worked so hard to help heal our local church and help victims of abuse; he will certainly bring these concerns and experiences to any office he holds in the church.

As Auxiliary Bishop, he helped lead the Archdiocese through a Chapter 11 bankruptcy from 2015 to 2018 that involved over 450 abuse claims and resulted in a $ 210 million settlement with victims- survivors.

A month after being ordained bishop, he was also involved in an internal sexual misconduct investigation against Archbishop John C. Nienstedt, who led the archdiocese from 2008 until his resignation in 2015.

Helen added that her brother is a strong leader and learned a lot from Archbishop Bernard A. Hebda of St. Paul and Minneapolis.

â€œThey have been through so much together and the Archbishop has been a great mentor and an example to my brother of a strong and loving leader,â€ she said.

His leadership and experience as a seminary teacher and trainer will bless the priests of Crookston, said Helen. â€œHe has the highest regard for the priesthood and the special men who are called to this vocation. “

He also recognizes the importance of evangelism, he said, from his experience as a missionary with NET and St. Paul’s Outreach.

â€œHe has a deep love for the evangelization of young people. He enjoys working in youth ministry and speaking at youth events, â€said Helen, adding that as chair of the American Bishops Evangelism Committee, he had a national perspective on the life of the Church. American church that he could share with the diocese of Crookston. “

Helen and Judy encouraged the people of the diocese to seek out and meet Bishop Cozzens.

â€œBishop Andrew is an energetic person who will enjoy getting to know his flock. He is creative and will find ways to help individuals grow in their faith, â€said Judy. â€œThe bishop loves to hear confessions and bring God’s mercy to his people; when people share their stories, he listens well.

Genereux writes for Our Northland Diocese, media outlet for the Diocese of Crookston.