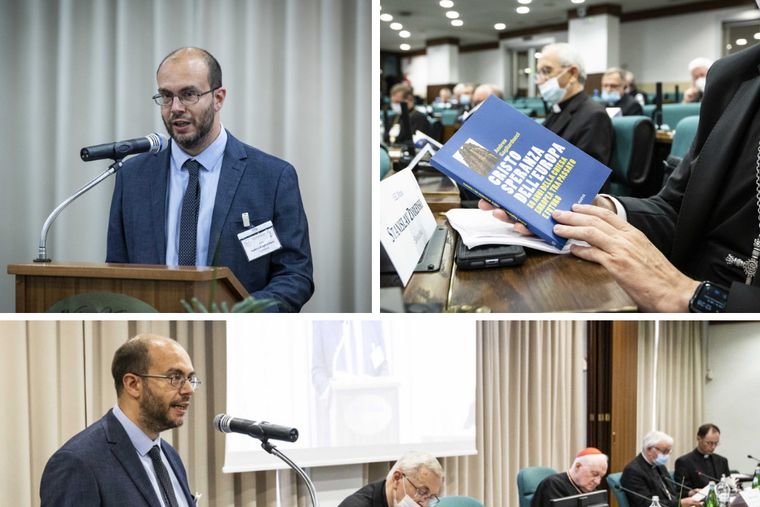 Church in Europe must stop being nostalgic and look to the future, says Vatican expert | Catholic National Register

In a dramatically de-Christianized Europe, the time is no longer for nostalgia for religious leaders, but for the active construction of creative minorities. This is what Andrea Gagliarducci, Italian journalist and Vatican expert, affirms in the conclusion of his delivered dedicated to the fifty years of existence of the Council of European Bishops’ Conferences (CCEE).

Prefaced by the President of the Council between 2016 and 2021, Cardinal Angelo Bagnasco, Cristo speranza dell’Europa, 50 anni della Chiesa europea tra passato e futuro (Christ, hope of Europe: 50 years of the European Church between past and future) offers keys for reflection on the vocation of this institution in the light of its history, marked in its beginnings by the profound changes brought about by the Second Vatican Council within the Church, then by the collapse of the communist regimes on the continent .

In this interview with the Registry, Gagliarducci – a veteran Vatican analyst for the Catholic news agency EWTN and ACI Stampa – discusses the relevance of such an institution in today’s world, as well as the great challenges facing it. expect the Catholic Church in Europe in the years to come.

What is the real influence of the CCEE in today’s Europe, where the Church is constantly losing ground? What is its vocation and its relevance?

If we’re looking for some kind of political impact, it’s hard to claim that there is. CCEE brings together Episcopal Conferences from across Europe, but it has yet to have coordinated efforts to have an impact as a whole. Rather, it is a kind of group that finds common ground and problems, but then lets each episcopal conference work its way. For example, family issues are always a big part of the discussion, but then every bishops’ conference in their own nation finds a way to move the issue forward.

The true vocation of CCEE is to constitute a working group on pastoral questions. From the start it was conceived as a kind of club of friends, as the European bishops discovered that they had a common history, values â€‹â€‹and challenges during Vatican Council II.

But let me add this: although the work of CCEE has no visible impact, I would say that its existence was important for Europe, because at least it showed the bishops that they were not. alone. This is important now, it was even more important when the CEEC was created and Europe was still divided by the Iron Curtain.

What are the major challenges facing the Conference today, compared to 50 years ago?

Fifty years ago, when half of Europe was under atheistic and anti-religious regimes, there was still a religious sentiment which found its main expression in religions. Secularization was not as developed as it is today. Nowadays, not only has secularization grown, but it has also gradually become more and more aggressive. Fifty years ago, the language of the Church – let’s call it that – was not as demonized as it is today. Today there is a new language which, in fact, kills everything. The Church’s message has not changed. The world has changed. The tools of war are more refined. Christianity is in danger of being culturally destroyed from the continent.

And that’s the biggest challenge, I would say. It is no longer a question of being together and of contributing to European construction. The Church can no longer even contribute, or if she does, she must do it the way the world does. Otherwise, the Church becomes the victim of visible and subtle attacks.

On the issue of religious freedom, which occupies a preponderant place at an unprecedented level since the founding of the CCEE, what tools does the conference have to defend its flock?

The theme of religious freedom has been a powerful tool that the Holy See has given to bishops and that Cardinal Karol WojtyÅ‚a, Saint John Paul II, has helped to develop. By participating in the Helsinki Agreements which led to the creation of the OSCE, the Holy See proposed a paragraph on respect for religious freedom in each country involved in the discussions and in the future organization. This was a boost, since the paragraph also required the Soviet Union to comply with it. And the Soviet Union, the promoter of the talks and indeed the country that invited the Holy See, agreed to the inclusion of this paragraph. Cardinal WojtyÅ‚a, who at the time was Archbishop of Krakow, immediately saw the opportunity to hammer home the communist system via the tool of religious freedom. He brought the issue to the CCEE table, and the European bishops also thought it was an opportunity for them to speak out.

I dare say that the shared understanding of the importance of religious freedom contributed to the fall of the Berlin Wall some 15 years later. The fact that the bishops have spoken out on the issue of religious freedom, seize the moment and exploit it, has become a kind of precedent. Nowadays, it is a powerful tool whenever the faith is discriminated against or attacked. It’s incredible to say, but it also happens in Europe.

The title of your book – Christ, the hope of Europe – refers to the post-synodal exhortation of John Paul II Ecclesia in Europe. Why did you choose this title?

John Paul II understood that with the fall of the Berlin Wall, Europe was going to be a real center of interest for the bishops. Things would change and the transition from the Communist regime to freedom was going to be difficult. He convened two special Synods on Europe, the first in 1991 and the second in 1999. The first aimed to recognize what was happening, the second to settle certain problems and to reach out for the future. It was interesting to me that the post-synodal exhortation Ecclesia in Europe, published in 2003 (four years after the second synod) focused on Christ as hope for Europe. Much has been said about re-evangelization, secularization and new challenges. Not only does this document contain clues to all modern problems, but it also provides them with an antidote, which is Christ. Thus, the title of the book is at the same time a tribute to John Paul II, who already helped as cardinal to energize the CCEE; and a tribute to the prophecy of John Paul II in anticipating the challenges of today.

You also develop the idea that the European divide, which was once between East and West, is now between North and South. What are the dynamics of such a division and what impact does it have on the Church?

When I talk about the East and the West and the North and the South, I am not just talking about geography. The East-West dialectic was very present in the days of the Iron Curtain, and it was clear that the Western world knew a quota of freedom and wealth that the peoples of the East could not. East and West talk about the differences between a free society and a state-run society. North and South speak of the difference between developed and less developed societies. Now that the Iron Curtain has fallen, there are still differences between East and West, and sometimes it seems that one cannot get rid of the Eastern mentality when visiting some countries previously of the other side of the Iron Curtain.

However, this difference is increasingly blurred, as economic imbalances have grown enormously. A gap has closed, and yet it is still present. The other gap has exploded. The impact on the Church has been enormous, as the Church has yet to resolve the East-West divide. There is a long road of reconciliation (with history, first) to come. The countries of Eastern Europe still think that the countries of the West did not get what they experienced. Thus, bishops and priests, with their knowledge and initiatives, are always working to heal the wounds of the past. In the meantime, they must take care of the new imbalances, they must take care of the primary needs of the population. These needy people don’t care less about the hurts of the past, and neither do wealthy people. As a result, the Church in Europe is still determined to find a real balance on how to fill the two gaps and end the imbalances. Not an easy task, I know.

Noting that “Christianity has shaped Europe and vice versa”, you write that looking to the past is not used to recover a glory that no longer exists. What role should the Catholic Church play in the future of the Old Continent?

But the Church is committed to building a new world. It must be. The role of the Church today, in my opinion, is to nurture and nurture the creative minorities of Catholics in every country. Many small creative minorities will build a larger community of Christians engaged in politics, society and culture. However, first we need creative minorities. This means that the Church does not have to look for the big numbers, but is now called to look for the good numbers. That is, people who really believe and who really have the mindset to build a new world. If the Church does this, not only will it survive, but it will generate a new generation and hope can be restored. Otherwise, the Church will be marginalized and ultimately not heard at all, seen as one voice, and a small one, among the rest.