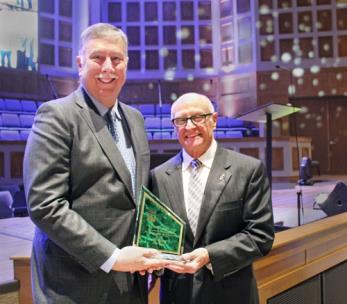 Presented in memory of the late Robert W. Varnell Jr., the award recognizes an individual who demonstrates excellence in leadership and profession, commitment to community, religion, high character and ethical standards. Beecher Hunter, the 2021 winner, presented the award to McIntire.

Looking back at his father in the insurance business when he was young, Mr. McIntire got his insurance license at age 20. He and his father started McIntire in 1981 and he assumed full ownership in 1992, where his father continued to work alongside him until his passing. in 1998.

“McIntire Insurance, formerly McIntire & Associates, has grown into a 20-employee company that has stayed on top of emerging technologies and offerings for its customers,” officials said.

“Bob’s priority is to make customers and employees feel like family, and he treats all of his customers the way he would want to be treated,” said nominee Diana Jackson, CEO of Life Bridges, Inc.

Inter-Agency Insurance Services President Lou Moran III said, “With his character, integrity and ability to listen to issues, Bob has guided insurers through very difficult circumstances this year. He has the unique ability to assess a situation and respond accordingly and thoughtfully rather than reacting to the situation…one of the hallmarks of true leadership.

In our community, Mr. McIntire serves on the board of directors of Life Bridges, Inc., the Cleveland State Community College Foundation, the Challenge Golf Association, the Industrial Development Board and the Cleveland/Bradley Chamber of Commerce. development. He has served on many other boards and in many community service roles.

Heavily involved with the First Baptist Church, the Fellowship of Christian Athletes and Emmaus Community Retreats, Mr. McIntire strives to make a difference in the community.