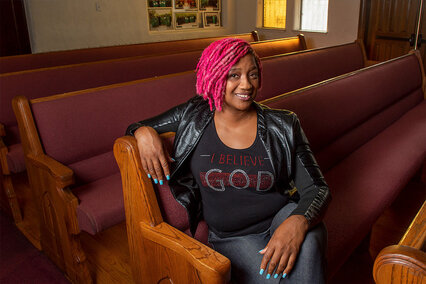 Many members of the Reverend Najuma Smith-Pollard Church near downtown Los Angeles have struggled to feed themselves during the COVID-19 pandemic. So she joined other church leaders in distributing groceries like chicken, pasta and cheese.

When parishioners needed to see a doctor or receive cancer treatment, church staff provided them with a safe ride through a loaner vehicle program.

And after the death of George Floyd and other black Americans at the hands of police, Smith-Pollard marched with members of the congregation through the streets of Los Angeles in protest. Alongside Mayor Eric Garcetti at a press conference in 2020 as civil unrest rocked the country, she urged Angelenos to stand up against injustice together.

The founding pastor of Word of Encouragement Community Church considers it all part of his calling.

“It’s not faith or activism,” says Smith-Pollard, associate director of community and public engagement at the USC Center for Religion and Civic Culture. “My faith informs my activism. It’s not a choice. I think that’s the case for a lot of people in the black church. Our way of doing activism may differ. This activism could go through the arts, through protest, through the pen.

“But if you are conscious or aware in some way, your faith informs your activism.”

Smith-Pollard and her fellow church leaders draw on a long and rich legacy of advocacy, change, and community outreach in black churches in Southern California and beyond. These congregations that primarily serve black Americans have played a pivotal role in sparking waves of social change, protest rallies with Martin Luther King Jr. to civil unrest reconstruction efforts from Rodney King to regional social justice and economic equality reforms today.

“Telling the story of social change in Los Angeles and not bringing in the black church would not be a true story,” Smith-Pollard says. “That must include the church.”

In memory: Victor A. Baez