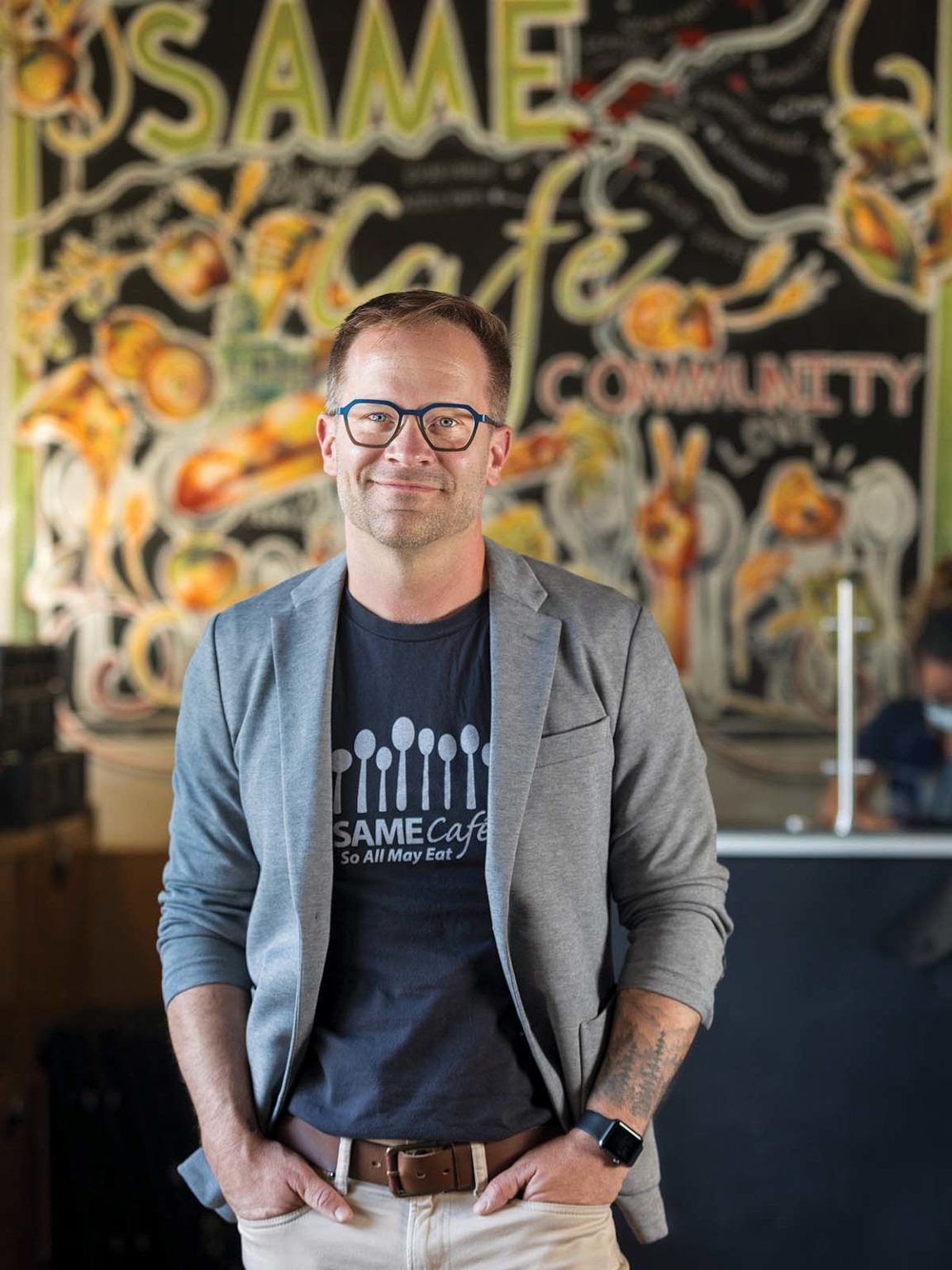 CU Denver alum Brad Reubendale, executive director of SAME (So All May Eat) Café, knows all too well what it means to lose everything. At age 17, he and his family were excommunicated from the Missouri sect in which he had been raised. “The only humans I knew were my brothers and my parents until I got back on my feet working in youth services for the Salvation Army.”

Reubendale managed to earn a bachelor’s degree in psychology/criminology from Missouri State University in 2006, became involved in evangelical Christianity through his work with Christian youth groups, and endured conversion therapy,” the thing of praying away from gay,” he says. “I interned with the conversion organization Exodus International and have tried to overcome any hurt I have caused since.”

After earning a Master of Divinity degree from Denver Seminary in 2011, Reubendale began the process to become an Anglican priest. “I had started a youth program and loved what I was doing, but I was immersed in the world of conversion therapy and it just wasn’t working,” he recalls.

In 2012, on the brink of suicide, he realized “maybe it would be better if I was just gay instead of dead,” he says. “I felt the clouds parting and the realization that ‘Brad, you’re not toxic.’ At that moment, I knew I was going to live.

The Anglican Church excommunicated him when he came out. Since living with seminary students, he ended up living homeless for nine months. He started visiting SAME Café, an innovative restaurant on East Colfax founded in 2006, dedicated to feeding people with dignity in exchange for contributions of time, money or products.

“I had lost access to healthy food,” Reubendale recalls. “I have low blood sugar and would go to a coffee shop and quietly put a dollar in the box, but I had nice clothes on and no one guessed I was in trouble.”

Determined to get his career back on track in 2014, he led the education program for the nonprofit Urban Peak for homeless youth and later served as program director for CASA (Court Appointed Special Advocates) in Boulder.

“I asked every association director I spoke to how they got their jobs,” he says. “They said you need to get experience in fundraising and that a master’s degree in nonprofit management wouldn’t hurt.”

Reubendale enrolled in CU Denver’s Graduate Certificate in Nonprofit Management at the School of Public Affairs in 2016 and soon began applying for executive director positions with nonprofits. lucrative. He was delighted to discover that SAME Café was recruiting.

“It was a family operation founded by this wonderful couple and I wanted to replicate it across the country,” he says. “After five months of interviews I told them I had other job openings and needed to know and they said ‘yes’.”

Reubendale succeeded Brad and Libby Birky in 2017. “I learned in CU Denver’s nonprofit management program that most nonprofit founders kill their organizations by loving them so much they don’t let go. “, he says. “I brought the research on this to the Birkys and we created a position for them so that they had no legal fiduciary responsibilities, but could still be advisers. To their credit, they stepped back and let me race and are now one of the best friends in the organization.

Reubendale calls CU Denver’s nonprofit management certificate program “one of the best educational experiences of my life,” he says. “I use what I learned there every day. It has helped me think creatively about how to stay lean while having the most impact. The Social Entrepreneurship course taught by John Ronquillo was incredibly helpful and the Nonprofit Financial Management course taught by Erik Estrada filled in all the gaps I needed to run the organization.

Reubendale and staff members are continuing the collaboration the Birkys began with CU Professor Rene Galindo, who teaches food justice in the city and schools.

“Brad Reubendale and the staff at SAME Café have been guest lecturers every semester in my food justice course since 2017,” Galindo said. “Listening to Brad speak, it was clear that he cared about the students and their education. He helped students understand the importance of SAME Café through personal stories of the impact of café customers on his life. Her stories taught students to see the human element of tackling food inequity. »

Reubendale began building a network of grassroots-focused SAME cafes across the country, opening a second location in Toledo, Ohio, later this summer, and was given the go-ahead to move forward with another in Pueblo. .

“Food insecurity is often the first indicator of challenges in people’s lives,” he says. “You can be food insecure while you wait for a paycheck to age 35 and everything in between.”

He is proud of SAME Cafe’s contribution to access to healthy food, so often out of reach of those who need it, and indirectly teach how to obtain and prepare healthy and affordable food. Feeding his dream transformed a life that once seemed hopeless.

“By listening to people’s stories, especially those living on the margins, I received far more help in this position than I ever offered to anyone,” he says. “The SAME Café saved my life twice. The first time I needed healthy food and the second time I needed to be reminded that humanity is good.