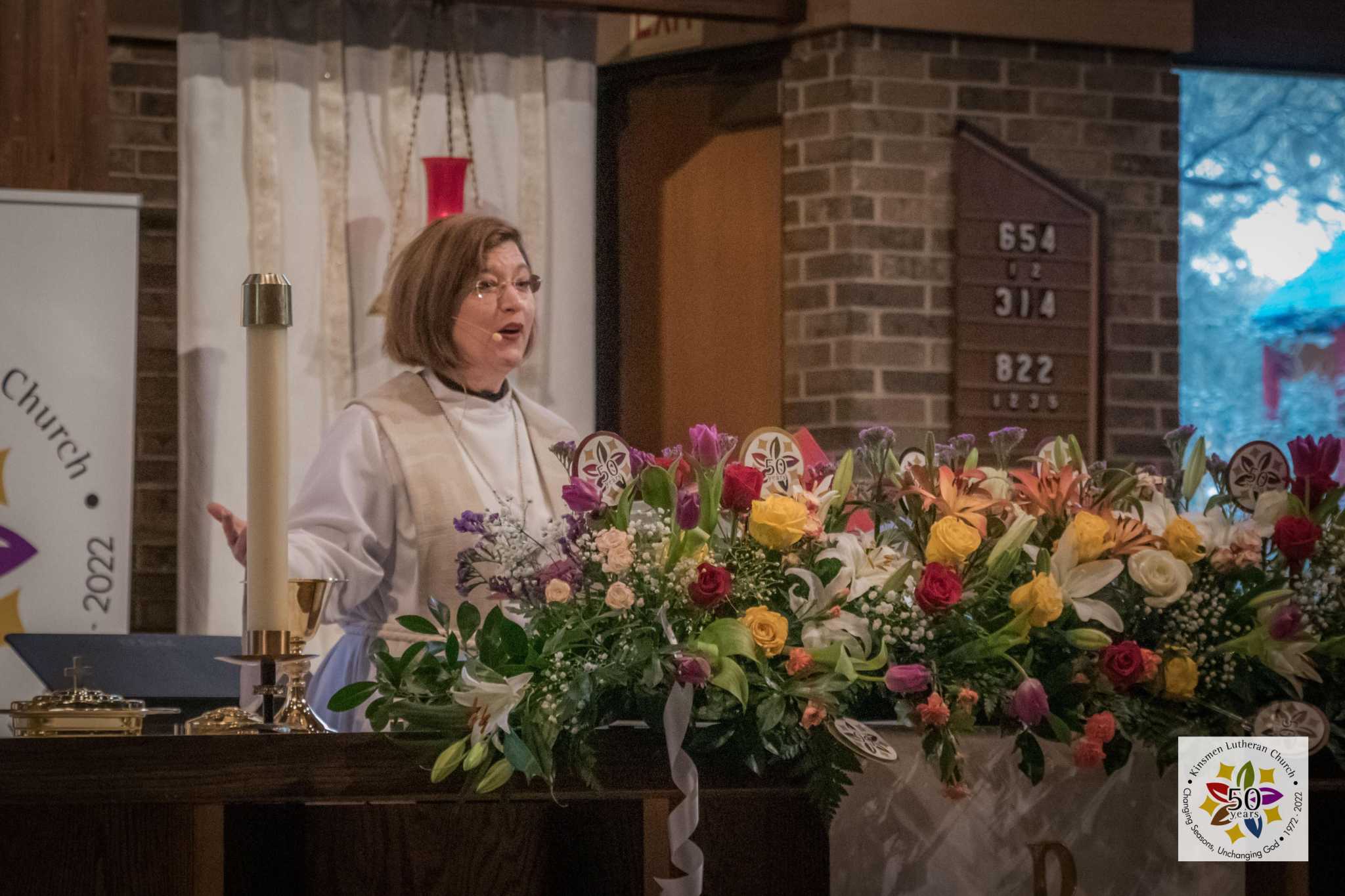 For the Hanson family, being active members of the Kinsmen Lutheran Church has been a multigenerational experience.

In 1990, two-year-old Andrew Hanson and his parents began attending church, where he celebrated many important milestones in his life: the birth and baptism of his younger brother, first communion, confirmation. It was there that he learned leadership skills from his youth group and got one of his first jobs.

On HoustonChronicle.com: The Perles d’Art Gala will be held in person for the first time since 2019

He remembers years ago when his mother, Kathy Hanson, chaired the event committee for Kinsmen’s 25th anniversary. However, the achievement inspired mixed feelings.

“There’s a part of me in my head that’s like ‘there’s no way I’m old enough to remember the 25th anniversary,'” he said, especially now that Kinsmen is celebrating its 50th. birthday.

“She wants to do the 75th,” joked her father, Mark Hanson.

Kinsmen celebrated five decades of service to Northwest Houston with a series of milestone events.

The church held a fall festival last year to commemorate the congregation moving their worship services from their homes to the cafeteria at Greenwood Elementary School in October 1971.

Another event took place on December 31, 2021, in conjunction with New Year’s Eve, to mark the day that 50 years ago they incorporated into the state of Texas.

Over the weekend of February 26, the Hansons, along with other current and past members of the church, gathered in Kinsmen to honor the 50th anniversary of the official organization of the church.

“The program looks at Kinsmen’s history and how it fits into the community,” Kathy said.

foundation for the future

The theme of Kinsmen’s celebration: “Changing the Seasons… Unchanging God.”

Senior Pastor Beth Warpmaeker said the theme reflects why Kinsmen wants to celebrate its history not only within the church, but also in the surrounding community.

In his weekend sermon, Warpmaeker described the different seasons Kinsmen went through. Describing each era, she asked congregants to raise their hands if they were joining the church during that time.

The first season, the “training season,” was in 1971, when the name of the congregation was Mission 435.

The group first met for worship at the home of founding pastor John Harpel and at the residences of other members.

They eventually moved their services to the cafeteria at Greenwood Forest Elementary School. There were 32 people at their first meeting at school.

When Mission 435 was officially organized, the church changed its name to Kinsmen to reflect a sense of closeness and family.

The congregation was able to move worship services from the school cafeteria to their new home: a comfortable metal building on land they secured in the Greenwood Forest area.

This was followed by a chapter she called the “planning season”, from 1975 to 1978, during which the church devised a master plan for its facilities.

Kinsmen dedicated a new sanctuary in June 1976 and held its first worship service at the new facility on Easter Sunday the following year.

During “building season,” the Kinsmen bid farewell to the founding pastor and welcomed new ones as the congregation grew. The church also constructed its education and administration building in 1980.

Some of her fondest memories at Kinsmen come from playing in the Bell Choir. At the time she joined, she was the youngest of the group.

“I was the only school-aged person to play bells (choir), but I had played bells at my church in Nebraska before I moved here, and the ladies just took this high school kid under their wing and m ‘have accepted”, Alfaro recalls.

“It can be other organizations that are part of (the Evangelical Lutheran Church in America) like Lutherhill Camp in La Grange, Lutheran Immigration and Refugee Services, Lutheran Disaster Response , and it’s also charities within our community that we support,” Alfaro mentioned.

Among these charitable community organizations is Northwest Assistance Ministries, a non-profit organization whose mission is to provide assistance to families in need. Kinsmen became one of NAM’s founding congregations during the building season.

Next came the “Growing Season”, from 1991 to 2001. As the name suggests, Kinsmen saw a significant increase in the number of people joining the congregation.

The church completed construction of its community life center and saw the expansion of some programs, including its before and after school ministry and music program.

The period that followed, from 2001 to 2007, Warpmaeker said, was the “expanding season,” when Kinsmen became even more focused on helping people in the surrounding community.

A milestone was the introduction of Camp Hope, a summer day camp program that is not only attended by youth, but also run by them.

The Hansons know firsthand the impact Camp Hope can have on children and teens.

Andrew was a regular participant in the program, first as a camper, then as a support staff member and finally as a paid staff member. Now working as Director of Engineering, Andrew believes he would not have considered management without the leadership opportunities he had at Camp Hope.

“It helped me developmentally…to have the opportunity to lead. And to be honest, to start with, it kind of took me out of my comfort zone, but then helped me to become more comfortable taking on leadership opportunities,” he said.

Vision for the future

Andrew attended college at the University of Texas where he met his future wife Jackie through the Lutheran ministry on campus.

“When we were dating, I had the opportunity to visit Kinsmen several times and from day one I always felt like I was part of the church,” Jackie said.

They married when they returned to Houston after college. Jackie officially became a member of Kinsmen in 2011, during a period Warpmaeker called the “roster season” – from 2007 to 2013.

Kinsmen established a new tradition during this time: its Thanksgiving Day and Run, when each year the church provides free Thanksgiving meals to hundreds of people in the community.

Warpmaeker came on board as Kinsmen’s senior pastor in 2014 at the start of what she calls “vision season.”

The church has begun a long-term vision process to answer the question, “What is God doing in this community now and how can we be part of it?”

The community has certainly changed over the past 50 years, said Peter Abt, a Kinsmen member since 1988.

Abt has been actively involved in church affairs through committees and leadership positions, including as immediate past president of the church council.

He was among the members of a committee charged with developing a long-term vision for the church.

One of the new initiatives born out of the long-term vision was Kinsmen’s Spanish-speaking ministry called Sagrada Familia, which means “Holy Family.”

Shortly after a pastor was called to lead the new ministry, the pandemic hit Houston.

“We started this against all odds,” said Adan Plata, who serves on the church board and is involved in Spanish-speaking ministry.

The arrival of the pandemic and the resulting shutdowns have limited their outreach options. Nonetheless, Plata said, the ministry has been successful in increasing attendance at services in Spanish.

In addition to services, the department now offers a variety of activities, including ESL classes, Zumba, and immigration forums.

Growth has been achieved by paying attention to people’s needs, Plata said.

“Pastor Gabriel (Marcano), he started communicating with people and trying to make friends and inviting them to services,” he said. “The Kinsmen Lutheran Church had a presence on the internet, so we started offering services online, which sparked the interest of many people.”

The church already had the equipment needed for live streaming through a fundraising campaign launched before the pandemic began, allowing for a relatively seamless transition to online services, Warpmaeker said.

“The theme that keeps coming up for me is ‘for a time like this,’ God was preparing us,” she said.

Today, at the start of a “season of redefinition,” Kinsmen continues its hybrid services while striving to meet community needs, whether it is a site for vaccination clinics or a partnership for food distributions.

The mission, which had 32 people when it first met in the school cafeteria, now has more than 1,000 members.

Andrew and Jackie now have children of their own – the next generation of Hansons who will have the opportunity to grow up in Kinsmen.

“It just makes me happy and comforted that even at 34, (Kinsmen) is still as relevant and important to my life as he was when I was three,” Andrew said.

It remains to be seen what changes will occur in the next 50 years. But their hope is that the Kinsmen will continue to be a relevant force in the community and a second family to their own.

“It’s really good to see that Kinsmen has stuck around and been able to do this ministry for so long and I hope that continues,” Jackie said. “It’s really exciting, especially to bring the kids to church, to see what it’s going to be like in the future. But hopefully it’s still some kind of home to come back to and be grounded and centered.

Kinsmen will hold its last birthday on May 21, marking the 50th birthday of the first founding member on Sunday. The celebration will be held in conjunction with the annual Kinsmen Crawfish Boil.