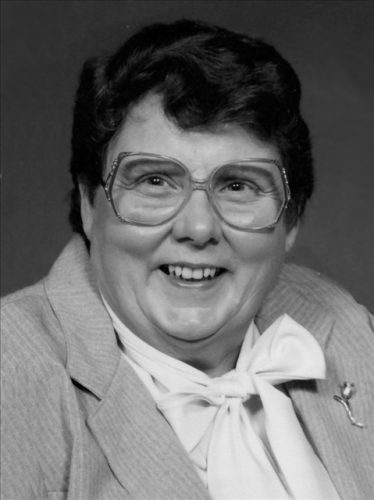 Ruth Alice Gabriel, 96, died on Saturday March 12 at the Primrose Retirement Community in Marion, where she had resided since 2015. Her health had been declining for several months.

Alice was born near Prospect on February 21, 1926, to the late Harold Randall and Grace Eva (Reynolds) Anson. She grew up on the family farm and graduated from Prospect High School in 1944, valedictorian of her class.

Alice’s long and rewarding life has been defined by family, faith, friends and two interests that emerged early in her life, music and banking. She told a reporter during a newspaper interview, “I love music. I started playing by ear when I was 4 years old. I knew two songs and my parents were tired of hearing them. So they organized lessons the following year I walked a mile on my own when I was 5 and paid 50 cents for my lesson. After years of study, Alice played piano, accordion and organ. She served many years as a church organist in Prospect and Toronto. She also played calliope on the Delta Queen and Mississippi Queen riverboats, as well as the theater organs of Marion and Columbus. During her retirement years, she and a friend, Kathryn Hammond, performed over 100 programs for various bands in eastern Ohio, taking them “in the past”.

His banking career began as a teenager. After graduation and a summer spent at Lakeside, Prospect Citizens Bank called and asked Alice to come to work while another employee was sick. First an accountant and cashier at 18, she retired at 72 as vice-president of UniBank of Steubenville. For many years, Uni Bank’s office in Toronto was known as “Alice’s Bank”.

A life member of The United Methodist Church, she was baptized, confirmed, and married into Prospect Methodist Church, a congregation founded in part by her ancestors. There she served as organist, financial secretary, board member and active member of the Sunshine Circle. Following her husband’s job transfer to Toronto, in 1960, Alice transferred her membership to the First United Methodist Church in Toronto. She again served as organist and financial secretary. She was also a lay delegate to the annual conference, served on the board of trustees, and enjoyed Faith Fellowship with women in the church.

In another interview, Alice was asked about happiness and success in life. She answered, “The answer is to have faith in God, to keep busy and not to let free time become boring time”. He was notably one of the founders of the Toronto Business Association, president of the Toronto Chamber of Commerce, member of the budget committee of the United Way of Jefferson County, member of the Private Industry Council of the Joint Training Partnership Act, chairman of the National Association of Bank Women’s Eastern Ohio group, advisory board member of the Tri-County Home Health Agency and volunteer with the Toronto unit of the Salvation Army. She was also president of the N&N and Three Arts clubs in Toronto. For several years, she was a member of the Toronto Senior Citizens and organized numerous bus trips for members. Additionally, she is a member of the Captain William Hendricks, National Society Daughters of the American Revolution chapter.

In recognition of Alice’s dedicated service, she was named Citizen of the Year by the Toronto, Ohio Chamber of Commerce. She was also a recipient of the United Way Gold Award for her commitment to the community and was named in the Who’s Who Registry of Business Leaders for her outstanding leadership and achievements in the banking profession.

On August 29, 1948, in Prospect Methodist Church, she married Robert B. Gabriel. He preceded her in death in 2005. She was also predeceased by her siblings, Edmund C. Anson and Margaret M. (Anson) Dunbar.

Funeral services will be held Thursday, March 17, 2022 at 2:00 p.m. at Prospect Cemetery, with the Reverend Kevin Rinkes, his pastor and longtime friend, officiating.

Because she suffered from low vision in her later years, memorial donations may be directed to the following: Ohio Lions Eye Care Fund, 13840 Robinson Road, Plain City, Ohio 43064

The family would like to express their sincere thanks for the excellent loving care Alice received from the nursing and care staff at Primrose Retirement Community. Additional thanks are due to Linda Oehler of Joyce’s Angels whose visits brightened her days, and to the team at Tranquility Hospice who cared for her during her final months.

Arrangements have been entrusted to Stofcheck-Ballinger Funeral Home, Prospect.

Condolences and remembrances can be expressed at www.stofcheck-ballinger.com.

The Governor General will travel to the Middle East