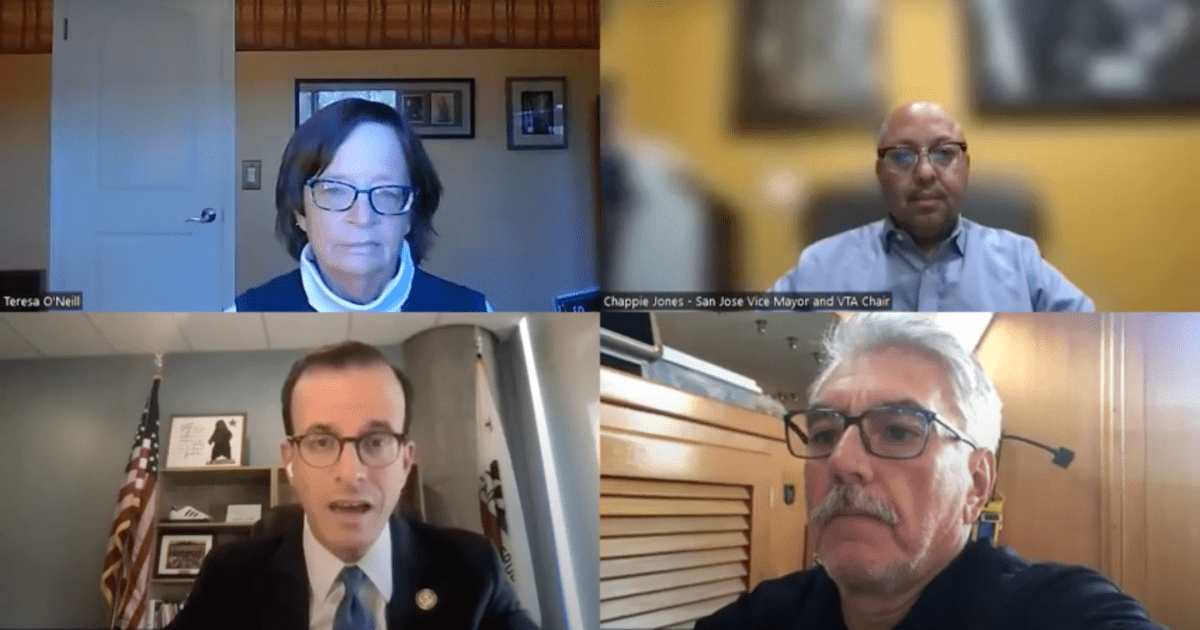 A Silicon Valley lawmaker wants big changes for the region’s main transit agency, and not everyone agrees.

Assemblyman Marc Berman hosted a roundtable this week to explore ideas for reforming VTA’s governance structure. Under the current system, elected officials from Santa Clara County and all of its cities are appointed as members of the 18-person council.

Berman opposes this system – last year he unsuccessfully tried to push through a bill that would have downsized the board and excluded elected members. At Wednesday’s meeting, Berman argued that the current system is the root of many of the agency’s problems, such as poor fare collection, high operating costs and deteriorating service.

He has expressed an interest in reducing the influence of local politicians who sometimes use the agency as a stepping stone to higher office. He said an alternative system — one where the board is either made up of officials elected directly by the public or made up of transit experts and advocates — could potentially help the board work better.

“My concern, which has been substantiated by three Santa Clara County grand jury reports over the past 20 years, is that the current council structure does not prepare council members to succeed,” he said. . A grand jury report in 2019 raised concerns about inexperienced board members and a lack of continuity in leadership. At one point, the VTA was called the worst public transit system in the country.

Former VTA President Teresa O’Neil is a strong supporter of reforming the agency’s governance structure. She described chairing her first meeting of the VTA board and finding that several members had been removed from their positions by the local town mayors who controlled the seats. In one case, she said, a mayor removed a VTA board member so he could take his place on the board because he was running for office.

“I doubt any of the board members have VTA as their first priority,” she said. O’Neil added that the agency not only oversees light rail and buses, but also highway projects and housing estates. These responsibilities require constant monitoring, which she says the agency has been unable to provide.

“Efforts to stabilize the composition of the board of directors have not been very effective, so the problems persist,” O’Neil said.

VTA President and Vice Mayor of San Jose Chappie Jones said the agency has already spent hundreds of hours reviewing nearly 90 recommendations from a consultant on how to improve engagement and engagement. effectiveness of the board of directors.

“VTA is currently in the process of evaluating and implementing several of our recommendations,” he said.

One of VTA’s most vocal critics, John Courtney, president of Amalgamated Transit Union Local 265, said he had to educate many newly appointed board members about how VTA works. , which can sometimes be frustrating. He said the search for alternative models for the board’s governance structure was overdue.

“There are some really good people on the board – we’re not trying to throw the baby out with the (bath)water,” said Courtney, whose union represents more than 1,500 VTA drivers and operators. . “What we’re trying to do is find a better way forward.”

Berman did not outline any specific legislative proposal and focused primarily on gathering public comment.

Ryan Globus, a member of VTA’s Citizens’ Advisory Committee, is concerned about residents voting for board members given their lack of familiarity with transit issues.

“Insiders, myself included, we love this stuff, we know this stuff,” he said. “But I often get messages from friends and family saying, ‘I have 15 things on the ballot, I don’t know who to vote for.

Gilroy Mayor Marie Blankley, who is an alternate on the VTA board, said she was leaning towards direct elections because it would help underrepresented communities in South County select transport leaders in common that would support them.

“It’s not just about understanding the transport, it’s about making sure the proportionate benefit is fairly distributed,” she said.

“It’s just a fact that appointed boards have less engagement from their members than those with elected members,” she said. “I think VTA would benefit from a more directly engaged board.”

Monica Mallon, a public transit advocate and San Jose Spotlight columnist, said she felt the discussion about governance reform was a distraction from larger VTA issues.

“The No. 1 thing that would improve public transit for residents is to get operating funding to run more services,” Mallon told San Jose Spotlight. “I really don’t think it makes a difference who is on the board.”