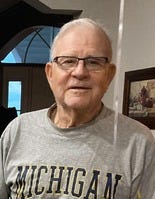 Wayne Walters, 91, from Riga, died at his home on May 14, with his family by his side. Wayne was born on November 13, 1930 in Bryan Ohio, to Lester and Lena Belle Walters.

On June 19, 1954, Wayne married Ruth Brieschke. After becoming husband and wife, Wayne was drafted and they moved together to Washington for basic army training. After basic training, Wayne was deployed to Fairbanks, Alaska, where Wayne and Ruth lived for a year.

When Wayne finished his service in the army, he returned to Riga, farming for many years before working with several companies selling and managing fertilizers and agricultural products. Wayne had a genuine love for the land that continued throughout his life, from farming, fishing, to hunting. He also loved a good game of cards, Wayne and Ruth participated in many card games from friends’ homes to the Blissfield senior center. He enjoyed a good game of golf, with his first job at the age of 10, at Defiance as a caddy at the golf club. For many years, Wayne and Ruth were part of the Ottawa Lake Square Dance Club. He also enjoyed the game of darts, playing for over 50 years, traveling to many Lutheran churches to play. The greatest love he had was for his family, doing his best to never miss a sporting event for his children and 10 grandchildren. Wayne has been a faithful member of Trinity Lutheran Church for 67 years.

Wayne is survived by his wife of 67 years, Ruth, children; David (Deanna) Walters, Scott (Brenda) Walters, Jeff (Debbie) Walters, Jan (Brian) Ford, also including 10 grandchildren and 6 great-grandchildren with another on the way, siblings Dale, Rachel , Janice, James, and so many nieces and nephews. He is predeceased by his parents, siblings John, Zelma, Leo, Harvey and Belva, and one great-granddaughter Ella Loraine Bechtel.

Online condolences and memories can be shared at www.WagleyFuneralHomes.com.

Trinity Lutheran Church in Riga, with visit one hour before the funeral