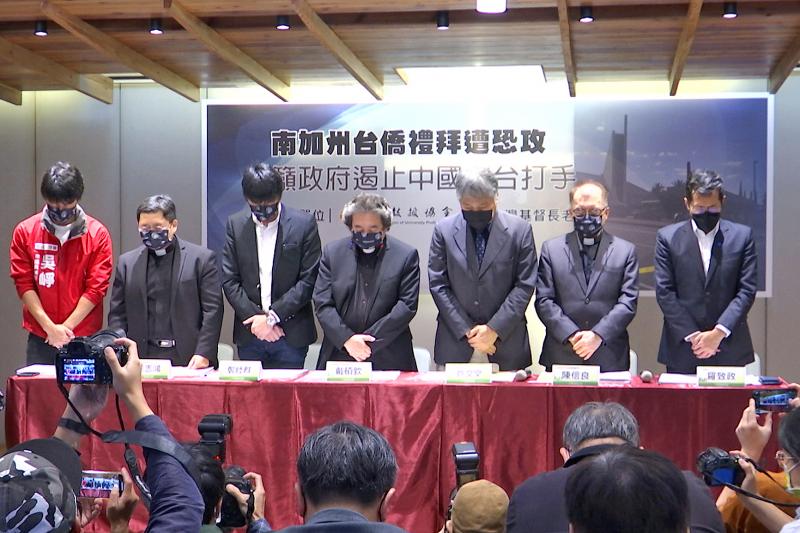 ACT NOW:
The Presbyterian Church in Taiwan and academics have called for investigations into pro-China organizations because the suspect belonged to an American branch of a pro-unification group

The Presbyterian Church in Taiwan and academics yesterday said Sunday’s shooting at a church in Laguna Woods, California, involving Taiwanese Americans was a hate crime, and called for an investigation into links between the suspect and the pro-Chinese groups in Taiwan and the US.

The shooting is linked to hate speech spread by pro-China groups, so the government must act to prevent them from taking advantage of the country’s democratic system and free speech to incite hostility and violence, Taiwan Presbyterian Church officials said at a press conference at Che-Lam (濟南教會) Presbyterian Church in Taipei yesterday.

Church officials were joined by members of the Taiwan Association of University Professors (TAUP), Democratic Progressive Party legislator Lo Chih-cheng (羅致政) and Wu Cheng (吳崢), the one of the leaders of the Tournesol movement in 2014, calling on the government to “crack down on Chinese proxies and agitators in Taiwan.”

Citing news reports, documents and evidence provided by Laguna Woods authorities and Taiwanese Americans in the United States, TAUP Chairman Hsu Wen-tang (許文堂) said the gunman 68-year-old David Wenwei Chou (周文偉), was a second generation waishengren (外省人), a term referring to people who fled to Taiwan with the Chinese Nationalist Party (KMT) in 1949 after its defeat in the Chinese Civil War.

He was born in Taiwan to Chinese parents, grew up in a military village and served as a lecturer at several universities in Taiwan, Hsu said.

Officials and scholars at the press conference discussed photographs and meeting records, showing Chou was at the founding of the Las Vegas Chinese for Peaceful Unification group in 2019 and became one of its board members administration. The group is a local branch of the National Association for the Peaceful Unification of China (NACPU), which falls under the China United Front Work Department.

There are also photographs showing Chou attending a rally with members of the Las Vegas Chinese for Peaceful Unification for KMT presidential candidate Han Kuo-yu (韓國瑜) in 2019, during which he held up a banner written in Chinese calling for “fervent support for Han”. and “the annihilation of separatist demons”.

Hsu said the US government has designated NACPU as a Chinese proxy organization.

“NACPU members have entered Taiwan several times in the past,” he said, urging the Ministry of Foreign Affairs (MOFA) to verify such links and ban NACPU members from entering Taiwan. .

Taiwanese civil society organizations backed the Washington-based Formosan Association for Public Affairs in calling on US authorities to prosecute the shooting as a politically motivated hate crime and “label all groups Chou is affiliated with as domestic terrorists”.

Officials from Hsu and the Presbyterian Church in Taiwan also demanded that MOFA and the Overseas Community Affairs Council investigate whether government agencies fund overseas organizations such as NACPU.

They said a NACPU delegation visited Taiwan in 2017 and held meetings with several groups, so the National Security Bureau should investigate possible links between pro-China organizations in Taiwan. and any group controlled by the Department of United Front Work.

They also urged the Executive Yuan and the Legislative Yuan to amend relevant laws to more severely punish people acting as proxies of foreign states to protect national security.

Hate crimes must be addressed, Hsu said, asking Washington not to allow people affiliated with NACPU or those engaged in “united front” work for China to apply for residency in the United States.

“It’s because the Constitution doesn’t reflect the current political situation in Taiwan. Therefore, we need to draft a new Constitution in line with the current reality of Taiwan, to end people’s confusion about national identity,” Chen said.

Comments will be moderated. Keep comments relevant to the article. Remarks containing abusive and obscene language, personal attacks of any kind or promotion will be removed and the user banned. The final decision will be at the discretion of the Taipei Times.