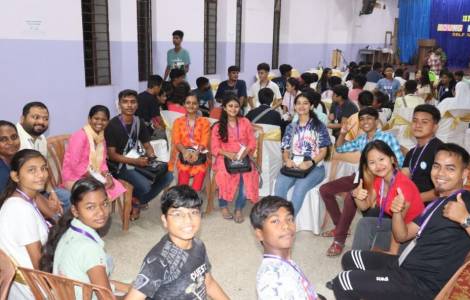 ASIA/INDIA – The Church for young people: energy, talent and dynamism at the service of the Kingdom of God

ASIA/INDIA – The Church for young people: energy, talent and dynamism at the service of the Kingdom of God

Bangalore (Agenzia Fides) – Living youth to the full, putting energy, talent and dynamism at the service of the Kingdom of God: this is the spirit that animated the third National Youth Conference, organized by the “Movement of young students Movement of Students” (YCS/YSM) in Bangalore in recent days.
Msgr. Peter Machado, Archbishop of Bangalore, urged the more than 220 students, delegates from different parts of the country, to bring their valuable contribution of ideas, creativity, enthusiasm to evangelization and the promotion of the common good in India . Prof. Stephen Alathara, Deputy Secretary General of CCBI (Conference of Catholic Bishops of India), Fr. Chethan Machado, National Chaplain of YCS/YSM, Fr. Anil D’Sa, Executive Secretary of the Commission for youth from the Archdiocese of Bangalore, and other priests and lay leaders involved in youth ministry in India were among those present at the Conference, which lasted five days and ended yesterday, May 26.
K. Mathai Kas, a former Indian Air Force officer, who during his service was posted 28 times, spoke at the conference and raised the issues of embezzlement and corruption in administration. The man also filed a petition with the Karnataka State Human Rights Commission. Kas addressed the youth assembly, appealing to the spirit of patriotism, arguing that young people are “the first and true promoters of truth and justice”.
During the sessions, the young people reflected on the theme “personal identity, education and new society”. Fr. Stephen Alathara shared examples of many Indian saints who lived a youth filled with ideals and the grace of God and urged students to be “modern saints”.
As part of the conference, the students were taken to ten different locations in Bangalore, to experience pastoral and social service, putting into practice the “see, judge, act” methodology. The students lived a fruitful experience of cultural exchange, meeting people from different regions, cultures, languages ​​and ethnicities of India, in an atmosphere of friendship and brotherhood. (AP) (Agenzia Fides, 27/5/2022)

Forget growth strategies and church management, theology is the beating heart of the Christian faith | Opinion