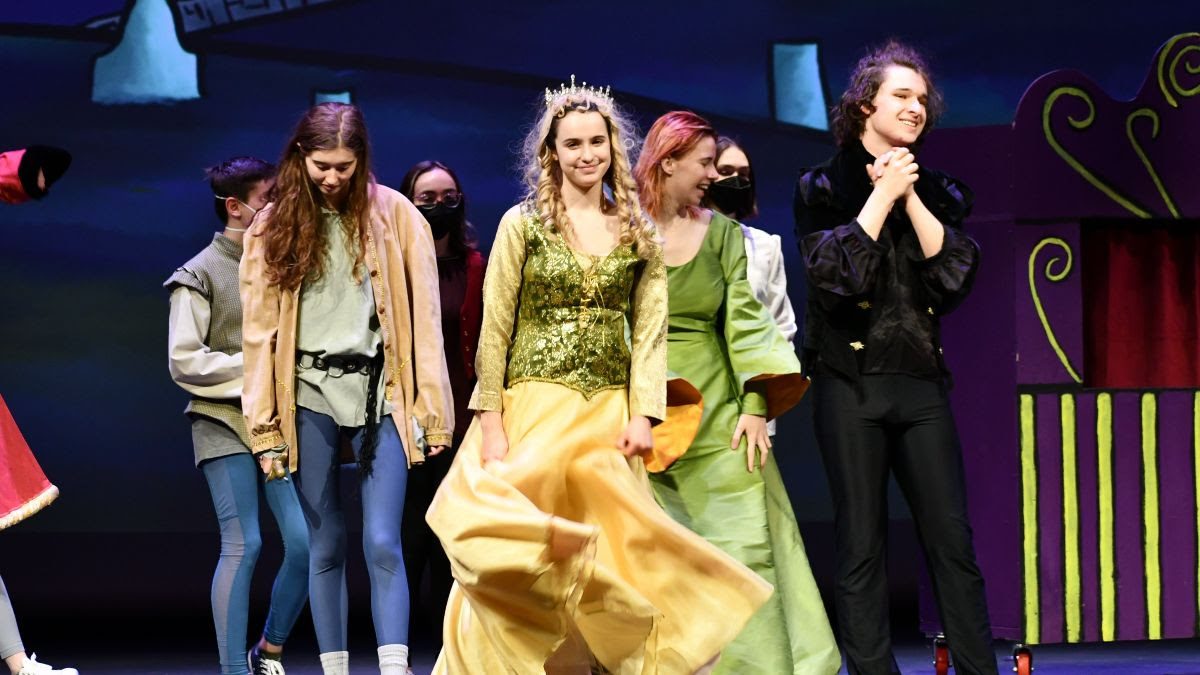 Katie Rice of Meridian High School was named the winner of a Cappie Award for Comedic Actor in a Female Role for her performance in the school’s Spring 2022 theater production of ‘The Complete Works of William Shakespeare (Abridged ) [Revised]Monday night at the Cappies’ 22nd Annual Gala at the Kennedy Center in front of a crowd of 2,500 in the concert hall. It was the first gala held in three years due to the Covid-19 pandemic.

Meridian’s play was also one of six nominees for best play out of a total of plays and musicals from 48 participating high schools in the DC Metro area that were voted on by 308 high school critics. The cast of Meridian performed a scene from their play in front of the gala audience.

The National Capital Region Cappies held their annual gala recognizing excellence in high school theatre. The sold-out Tony’s-style event held in the Kennedy Center Concert Hall celebrated hundreds of student nominees. Most, but not all, of the students and their parents, guardians, or friends showed up in full dress.

Eleven schools that were nominated for Best Play or Musical performed brief segments of their productions to the delight of a very enthusiastic audience made up primarily of the many nominated students. Community dignitaries and Cappies alumni presented awards to finalists in 40 technical and performance categories.

Coincidentally, Katie Rice was announced the winner in her category by two dignitaries from the Falls Church school system who happened to be the presenters at the same time, Superintendent Dr. Peter Noonan and School Board President Laura Downs.

The other Falls Church presenter was Nicholas Benton, owner of Falls Church News-Press, who was also credited with being among the regional entities that published reviews of Cappies during the school year.

In what has become an annual tradition, U.S. Representative Gerry Connolly of Fairfax County, who described himself as a “fellow actor” with roles in a range of local community stage productions, presented the award for best piece to top off the show.

Area high schools near Falls Church also did very well in nominations and winners, especially McLean High School, which had winners in the Marketing and Publicity, Hair and Makeup, and Best Game categories ( “Airness”, High School Edition), and Langley High School which had winners for Stage Crew and Male Vocalist (Conor Farah).

The Musical of the Year award went to South Lakes High for its production of “Crazy for You” which included the best song winner, “I’ve Got Rhythm”.

Cappies is described as “a unique collaborative program for journalism and theater students.” Throughout the year, trained student critics review Cappies-designated high school shows.
The best written reviews are published in the local press. At the end of the season, student critics vote on which of their peers should be recognized for awards.

Cappies Critics are ambassadors for high school drama and spread the word about the value and fun of participating in drama. A taped version of Monday night’s three-hour ceremony will air this Friday at 7 p.m. on Fairfax County cable channel 21 and on the Fairfax County Schools website, fcps.tv/edu, at the same time. It will then be posted on the county schools YouTube channel where it will be available throughout the summer.