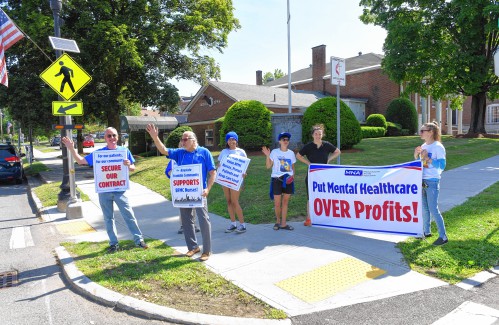 GREENFIELD – Nurses from Baystate Franklin Medical Center gathered outside the Episcopal Church of Saints James and Andrew on Wednesday, advocating once again for fair pay and generally greater investment in community nursing as the Contract negotiations continue.

“We need to make it attractive and competitive and make it possible for local nurses to stay in their own community,” said Marissa Potter, junior co-chair of the bargaining committee.

June marks about six months since the start of negotiations, union representatives said on Wednesday as they stood outside the church, where negotiations were due to continue. The nurses were joined by family and friends, as well as members of the Massachusetts Teachers Association and Greenfield-based Franklin County, continuing the political revolution.

Potter, a registered nurse and resident of Shelburne Falls, said she and her peers are asking for contracts with “adequate and fair wages” that allow them to continue caring in their home communities.

Anita Fritz, a spokeswoman for Baystate Franklin, said the hospital continues to have “productive contract negotiations” with representatives from the Massachusetts Nurses Association.

“Both parties were respectful and focused on reaching a deal,” Fritz wrote in a statement. “We are confident that our proposals reflect our commitment to secure staffing, competitive compensation and continued investment in local care.”

Suzanne Love, an emergency department nurse who is also a bargaining unit co-chair, said while nurses at Baystate Franklin appreciate the work of travel nurses, it’s not a model that encourages retention of workers. nurses. In many cases, she said, there are Greenfield nurses with travel nursing contracts at other hospitals in western Massachusetts and vice versa.

According to Love, nurses at Baystate Franklin are among the lowest paid in the area. Travel nurses are helping fill the coverage gaps this has caused, she said, but “we can’t rely on these contract workers for long-term care.”

By comparison, as a nurse at Baystate Franklin Medical Center’s Birthplace, Potter said she sees patients throughout the reproductive cycle.

“It’s a good example of community nursing, where you get to know us,” she says.

“What’s important to understand is…there are many more nurses graduating every day,” she said. “What we have is a lack of nurses willing to accept hospital conditions.”

Love said Baystate Franklin’s current management team is one of the best she has worked with.

“They do what they can,” she says. “But we would like everyone to dig a little deeper to keep this hospital running smoothly.”

She noted that past contract negotiations have lasted 42 sessions over 2.5 years.