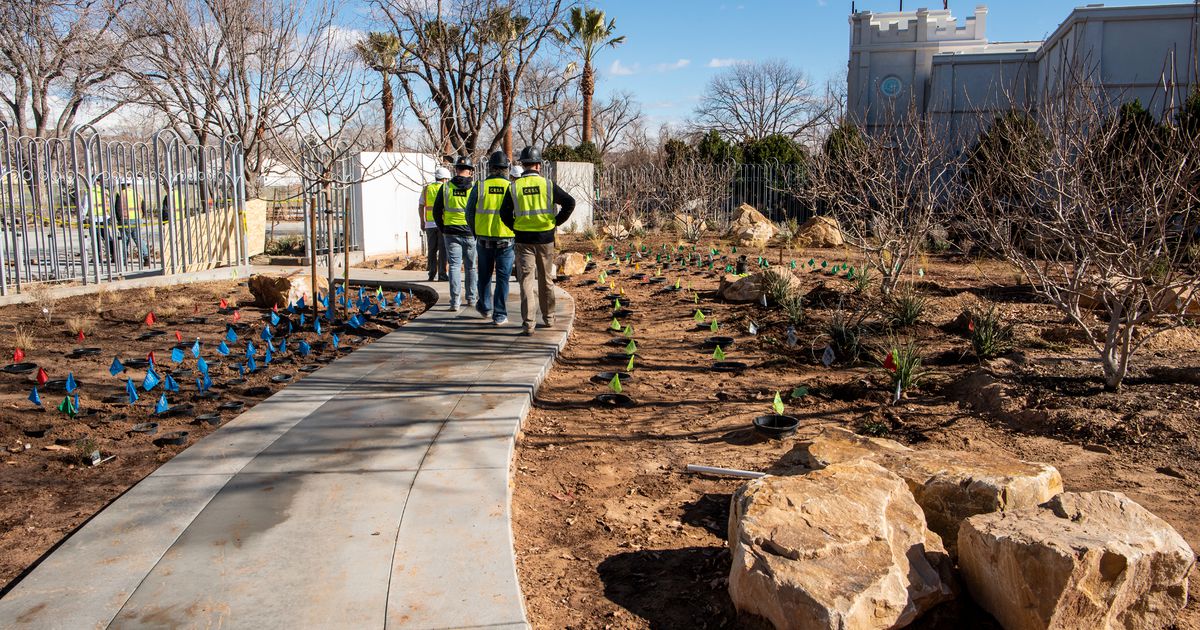 Recognizing the West’s crippling drought, the Utah-based faith is considering permanent changes to its landscapes, like native plants and improving water management practices.

(The Church of Jesus Christ of Latter-day Saints) Landscapers prepare the smart irrigation system and plants on the grounds of St. George’s Temple.

Properties belonging to The Church of Jesus Christ of Latter-day Saints, long known for its lush landscapes in arid Utah, are undergoing an overhaul.

In a press release issued Wednesday, the Salt Lake City-based faith acknowledged the unprecedented drought affecting the West. In response, the church said it was working to reduce water usage in all of its buildings and facilities in the area, including outdoor irrigation.

“In some cases, [the] the landscape will be allowed to brown and become dormant,” the statement read. “…Planning is underway to identify landscape changes that will permanently reduce water use.”

Church properties have incorporated sprinkler systems and low-flow plumbing fixtures into properties built since 2000, the statement said, and others have since been upgraded. The church is also taking steps to install smart controllers, drip systems, rain sensors and to explore “the use of secondary or reclaimed water.”

“Additionally, we have adjusted watering schedules to meet local government guidelines,” the statement said, “and we continue to monitor conditions at all church properties.”

The American-born faith is one of the largest private landowners in Utah and the country. He pointed to similar efforts to reduce his water use last year, including removing a fountain in Temple Square and replacing it with a display of world flags.

But the church has often been called out for its remarkably verdant grass and vegetation, including in YouTube videos and letters to the Salt Lake Tribune, even as cities have cracked down on overwatering in recent years.

Going forward, the church is further exploring more lasting changes to its landscapes, the statement said. “These include native plants, low-use lawns, and water management practices.”

The statement further explains that the church has already reduced water use by a third at “historic sites” in drought-affected areas, although it does not cite any examples. It also did not quantify or offer numbers for conservation efforts at other properties or its future water reduction goals.

“We all play a part in preserving the essential resources needed to sustain life – especially water – and we invite others to join us in reducing water consumption where possible,” says the press release. “We gladly join friends of other faiths in praying to our Heavenly Father for rain and respite from the devastating drought.”

The 16.8 million members of the global faith “live in a variety of environmental circumstances,” the statement added. “In one area there may be severe drought, while in another wet conditions may cause significant flooding.”

Regardless, church leaders teach members that “we have a responsibility to care for what God has given and to use it gratefully, to avoid wasting resources, and to use wisely the bounty of the earth to care for one another”.

In 2017, Apostle Dallin H. Oaks, now First Counselor in the governing First Presidency and next to lead the Church, highlighted “great concerns,” including climate change.

“Coastal cities are concerned about rising sea levels, which will bring ocean tides to their doorsteps or above their thresholds,” he told graduates of Brigham Young University of Hawaii. , property of the church. “Global warming also affects agriculture and wildlife.”