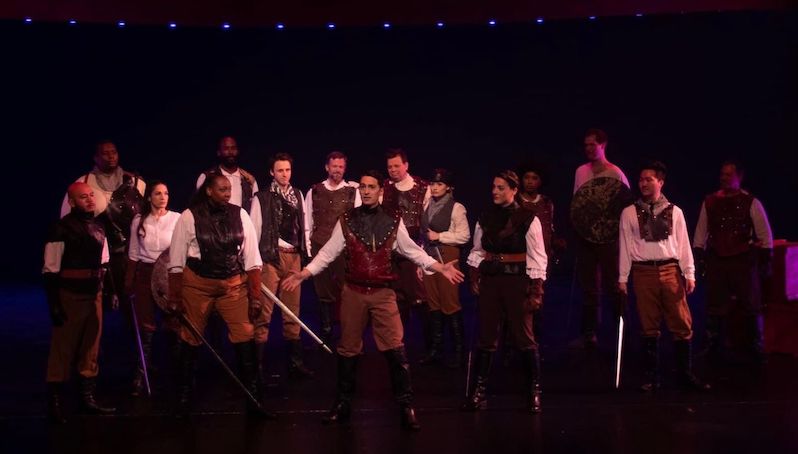 CANTON, Mich. — What makes a good leader? Is it charisma? Is it the ability to motivate people? Is it right ? Is it strict adherence and respect for the rule of law?

All these questions are raised by the production of Shakespeare The life of King Henry V at the Michigan Shakespeare Festival. It’s a play that promotes patriotism and offers the power to deliver a good speech and set a good example. It shows a leader who has to make tough decisions and do tough things. It presents a king aware of the heavy responsibility he bears for the lives and souls of the people he rules.

In the world we now inhabit, it is fitting to ask these questions about leadership and what we should expect of those who make decisions about the lives of others.

Directed by Janice L. Blixt, Henry V is filled with powerful images. She makes strong vocal choices by dividing up the tasks of the chorus, putting the lines in many mouths, emphasizing the community effect one person’s decisions have. Everything is staged thoughtfully and intentionally. Blixt manifests his vision through both the choreography of the chorus and the carefully staged interactions of the individuals.

The stories are often complex because they are filled with characters that contemporary audiences would have known without needing an introduction. In contrast, we Americans are not so comfortable with the stately lines and houses of medieval England. That’s why Blixt’s casting and directing choices are so important to making this play accessible. It becomes less important to remember every relationship and position they held, and more important to be able to recognize whether they belong to royalty, nobility, clergy or commoner, and what that means as they go. as the story progresses.

Perhaps the centerpiece of the play is royalty, primarily the King of England, although the King of France, the Prince (aka the Dauphin), the Princess and the Queen also play important roles.

It helps that Sam Hubbard is so charismatic and able to lead the day with apparent ease as the eponymous king. Although he is young, Henry is determined to be as good a king as he was in his youth. He acknowledges the misdeeds of his youth by not excusing them and not letting them prevent future glory. Hubbard moves and speaks with confidence, portraying a sense of ease and magnetism. His Henry seeks information that can make him a better king and makes his proclamations with certainty.

His youth and charisma contrast sharply with the frailty and age of the King of France, played with severe disapproval by Jonathan Wallace. Wallace presents him as a man without patience for the flippancy of his son, the Dauphin. Victor Yang sneers and struts like the prince who has nothing but contempt for Henry and underestimates and mocks him. Wallace and Yang place the father-son couple on opposite ends of a spectrum, which makes each of these scenes interesting and helps to heighten the tension between the warring factions.

Among the nobility, Demetria Thomas stands out as the Duke of Exeter, Henry’s uncle. She darkly wears the mantle of a loyal elder, determined to see her nephew’s success. Thomas also stars as Mistress Quickly, a role to which she brings both energetic playfulness and a sobering foreshadowing to what will become of the merry band of fools who were once Henry’s companions.

Wallace, the King of France, also stars as Pistol, the commoner who marries Mistress Quickly and was once in the company of Falstaff in Henry’s youth. It does a great job of creating two distinct characters, as different as possible, sometimes switching from one to the other without leaving the stage. He made the most of his height to create vastly different physical appearances, mostly through the use of his legs – the king stood tall and straight, Pistol was crooked and akimbo. But it’s not just his looks that make Pistol so endearing, it’s his latent anger, disregard for convention, and determination to survive in a world that has little respect for him.

Daniel Millhouse is another who plays two very different characters. As Constable of France, his respect for the enemy contrasts him with the Dauphin. He is more cautious and cunning, a leader fit to oppose Henry. All that composure is cast aside when he becomes the red-nosed, drunk Bardolph, companion to Pistol and Nym. He manages to create a drunkard larger than life, cheerful and indifferent to the law. Although he seems to fulfill the purpose of comic relief, that is only one aspect of the character. His last word on stage manages to both break hearts and establish Henry as a true leader committed to the rule of law, whatever the cost.

Impressively, there were no weak links in this cast of 16. Each performed in harmony with the vision established by Blixt and engaged in a compelling performance, whether they took on the role of a princess or a princess. a member of the choir. It was an ensemble that understood the story they were telling and knew how to play every melodic strain to make the piece sing in the hearts of the audience.

It is often difficult to see the work of a director – indeed, some would say that if the work is done well, it is invisible. However, the staging of this production highlights the talent of production manager Stefanie Din and her assistant managers Rebecca MacCreery, Jada McCarthy and Rylan Houle. They made sure the costumes and props moved impressively on and off the stage and ensured that the rhythm of the show never missed a beat.

Emily McConnell created costumes that did what needed to be done: stage the play in 1415, create a visual difference between classes and countries, and allow for quick changes on stage. With so many characters to dress up, it’s impressive that she did it so well and with very cohesive looks.

Musical composition and sound design by Christopher Kriz added drama to the production from the moment the house lights first went out to the last call. It gave “Henry V” an almost cinematic feel, with a score that captured key emotional moments.

At a time when we are called to question the characteristics we expect in a leader – and to look closely at what rhetoric, rightly or wrongly, inspires people to do –Henry V is a piece that suggests a pattern while keeping the answers to these questions open.

Henry V will take place on July 31, August 3, 6, 12, 13, 18 and 20 at the Théâtre du Village in Canton. Ticket information and purchases can be made at The Michigan Shakespeare Festival website here.