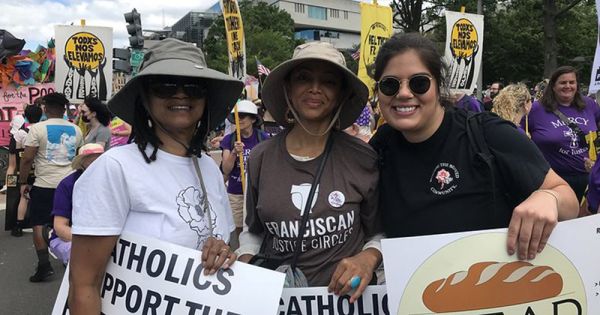 Pax Christi USA national board president Charlene Howard, national board member Josie Garnem and the organization’s national organizer Lauren Bailey pose during a demonstration June 18 in Washington, calling for spending to be prioritized of the federal budget for human needs rather than the military. (CNS/Courtesy of Pax Christi USA)

Pax Christi USA, a branch of the international Catholic peace movement, will celebrate its 50th anniversary with a conference August 5-7 just outside Washington.

Johnny Zokovitch, the group’s executive director, told NCR that the 50th anniversary is a time to both celebrate the vision of the founders, who understood “how much the church needed an organized witness to peace” , and to focus on “looking ahead and building on that”. legacy” by engaging young people in the movement.

“We’re busy,” said Charlene Howard, chair of the group’s National Council, speaking of the involvement of every member of their board in supporting the conference.

The conference will feature a keynote address by Archbishop of Santa Fe John Wester, who issued a pastoral letter calling for nuclear disarmament in early 2022. As reported by Catholic News Service, two of the three U.S. nuclear research facilities nuclear weapons, the Sandia and Los Alamos National Laboratories, as well as the nation’s largest nuclear weapons storage facility, are located in the Archdiocese of Wester.

Marie Dennis, who served as co-chair from 2007 to 2019 of Pax Christi International, an umbrella group of Pax Christi groups around the world, said Wester’s call for nuclear disarmament, particularly given the location of his archdiocese, is a model of how Catholics could pursue difficult conversations on ethical issues.

Marie Dennis is seen near Capitol Hill on May 21, 2018 in Washington. (SNC/Tyler Orsburn)

“How do we imagine another economy where people have jobs, where people don’t depend on building weapons? asked Dennis, who is currently chair of the Catholic Initiative for Nonviolence program, which focuses on issues of nonviolence and just peace.

“We have to find ways to get our economy out of an addiction to war and the war machine,” Dennis said.

Retired Auxiliary Bishop of Detroit Thomas Gumbleton, a founding member of Pax Christi USA, said he hopes Wester will be inspired by the US Bishops’ 1983 Pastoral Letter, “The Challenge of Peace: God’s Promise and Our Responsein his address to the conference. In that letter, the bishops said that the arms race “poses an unprecedented threat to human life and human civilization.”

Gumbleton, who simultaneously served on the committee of bishops that authored the 1983 document and then president of Pax Christi USA, said he relied on the advice of members of the movement while working on the letter. “I hope that [Wester] can reinforce everything we said in 1983 and make it a message that will attract and follow people,” Gumbleton said.

Says Dennis: “Pax Christi was founded in the middle of the Cold War and began by recognizing that the United States was a central and very important player in what would happen during the Cold War and where we would go in terms of war or of peace. going forward, so the accountability of Pax Christi USA began with, I think, a very deep and serious commitment to bringing the United States back from the brink of war.”

Gumbleton said the organization had a rough start until Erie, Pa. Benedictine Sr. Mary Lou Kownacki became executive director. He said the Benedictines made Pax Christi USA “a strong movement.” “Without that change, we would have just spat, I think,” he said.

The organization faced another inflection point when other peace organizations disappeared at the end of the Cold War. But Pax Christi USA stayed, which Zokovitch attributes to the movement’s “multi-issue and intersectional” orientation. Pax Christi endured because instead of a “war/peace axis”, the movement was built around an “oppression/liberation axis”, he said.

Howard emphasized this perspective saying, “What does peace really mean? It’s not the absence of war. It’s living in an environment as God intended so that everyone can prosper.”

“What does peace really mean? It is not the absence of war. It is living in an environment as God intended for everyone to flourish.
—Charlene Howard, President of the National Council of Pax Christi USA

Johnny Zokovitch, executive director of Pax Christi USA, is seen in this undated photo. He said the organization has been rooted in Catholic social teaching for 50 years and has placed greater emphasis on how economic justice, racial equality and military spending are interconnected. (CNS/Courtesy of Pax Christi USA)

This understanding of peace led Pax Christi to engage in internal anti-racist work in the mid-1990s. “If we were to be authentic in calling ourselves the national Catholic movement for peace and justice,” Zokovitch said, “ we needed to better reflect the experience and contributions of the American Catholic Church,” which was far more racially diverse than the movement at that time.

This anti-racist work continues with Pax Christi anti-racism team and throughout the organization. “Anyone who does anti-racism work will tell you it’s not a comfortable place at all. It’s a place of great tension and discomfort,” said Zokovitch, who has led Pax Christi USA since 2019 and has previously worked for US and international organizations. .

Howard is dedicated to “continuing to increase the organization’s visibility and viability among people of color,” especially among other African Americans like her. “I want us, as an organization, to be intentional not just to address anti-racism issues, but also very intentional to say, ‘Well, what does that look like? ”

After the 50th anniversary conference, Zokovitch said Pax Christi will focus on engaging high school and college students and young adults in the movement.

And while the group is impacted by the exodus of young people from the Catholic Church, Zokovitch hopes that the elevation of women to leadership roles, openness to LGBTQ people and acceptance of “the deepest aspirations that people have for a transformed society that is rooted in the values ​​of peace, justice, love and compassion” will differentiate Pax Christi from the institutional church.

“If you find it difficult to find a place for how you envision your faith in the Catholic context, in your parish or in your school or in your diocese,” Zokovitch said, “Pax Christi USA is actually a home for you. “

Enter your email address to receive free newsletters from NCR.