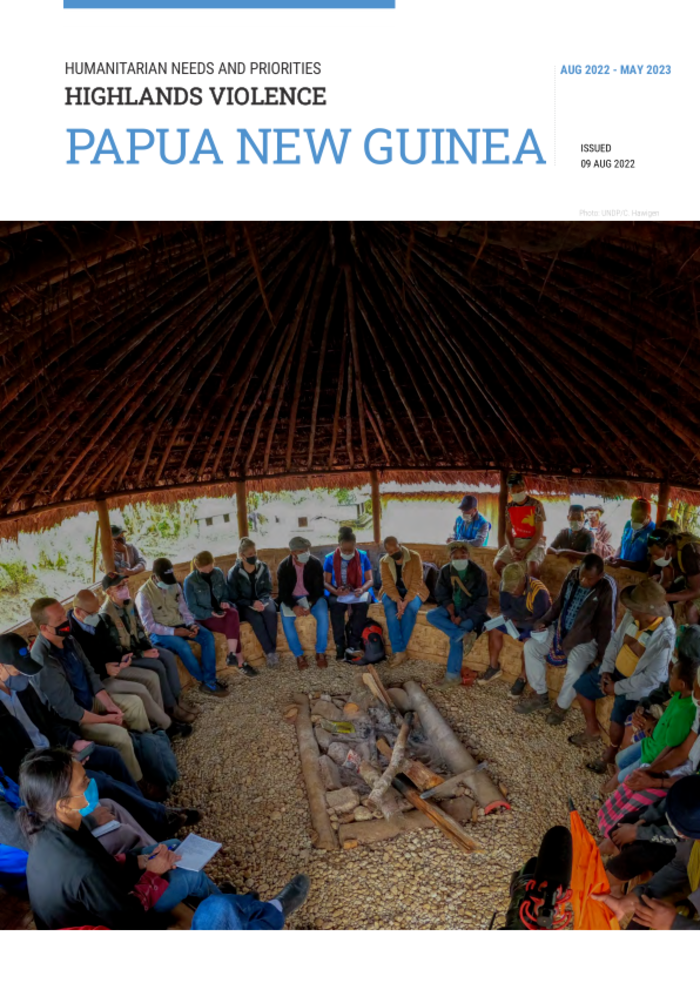 Overview of the situation

Between May and July 2022, the period of the national general election, violence escalated in parts of the Highlands region. The presence of security personnel in the conflict-affected areas is limited, tensions remain high and further outbreaks of violence could continue at least until the end of August, during the period of disputed election results. . While in most areas the violence is directly linked to the election, in some places it has resurfaced from long-standing issues, including land disputes, reprisals and unsettled disputes between clans, who use the instability around the elections to rekindle the fighting. .

The areas considered to have the greatest humanitarian needs are Porgera, Laiagam and Kompiam districts in Enga province; Magarima District in Hela Province; and Nipa District in the Southern Highlands Province. While the commercial airport serving Enga province remains closed, Mission Aviation Fellowship has resumed regular flights to parts of the province, and the roads are passable with coordinated security escorts.

Due to ongoing insecurity in these areas, needs assessments cannot currently be conducted. Projected populations, disaggregated by sex and age group, including some vulnerable populations, also serve as an indicator of all affected populations. The estimated number of affected population is uncertain at this stage; however, the overall population of these affected districts is estimated at 529,181 people or 98,349 households. The CCCM/Shelter/NFI cluster estimates that approximately 50% of the population, or 264,590 people or 49,175 households, have been affected. The cluster further estimates that a third of these people – 87,315 people or 16,227 households – could be displaced from their homes.

In some places, churches, considered as refuges, welcome displaced populations; six churches in the province of Enga welcome around 2,000 people, mainly women and children.

Estimates by organizations and government officials in affected districts and provinces indicate that around 21,000 people are displaced or fled conflict-affected areas as of the end of July, but this figure is believed to be a gross underestimate compared to to the actual number of people. who fled or were displaced.

Most of the displaced people have fled to other communities inside and outside the respective provinces or to nearby mountains. There is pressure on churches and communities hosting displaced people, which in some cases include victims of sexual violence, to provide basic needs and health care.

Businesses, schools and hospitals in these areas have closed, and many have been damaged or destroyed in the fighting. Current estimates of populations served by health facilities and enrollment figures are indicators of populations affected by lack of access to basic health services and education: approximately 25,700 students cannot go to school. school and about 557,800 people have little or no access to basic health services due to damaged facilities, lack of staff who fled the violence, disrupted supply chains and other impacts of the violence .

The director of the National Disaster Management Center wrote to the United Nations Resident Coordinator, as co-chair of the disaster management team, on July 26, wishing to receive assistance from international partners. He also asked the Commissioner of Police, who coordinates election-related security in the Highlands, that a humanitarian corridor be established to allow the safe delivery of essential relief goods and services. The Commissioner has identified a coordination focal point but recognizes that the security forces have limited capacities.

Private sector companies and members of the Highlands Humanitarian Hub coordinated at least two truck convoys to a church in Porgera hosting around 300 women and children, including rape victims, to deliver food and non-food items to emergency, as well as post-rape treatment kit services.

Churches and NGOs working with affected communities and displaced people in these provinces have indicated the following urgent needs:

• Lack of food, including fresh produce and protein, as well as store items and fuel • Lack of medicines and medical supplies, as well as lack of medical services, especially for victims of charges of rape and witchcraft • Lack of shelter, clothing, hygiene items and other relief items, especially for IDPs • Lack of access to education for school-aged children To meet these needs critical, a multi-sector humanitarian response is needed in five districts – through camp coordination and management, shelter non-food items (CCCM/Shelter/NFI; water, sanitation and hygiene (WASH); protection, especially violence based gender (GBV) and child protection (CP); food security; education; and health, including sexual and reproductive health.

Although initial response planning can rely on estimated numbers and secondary data, assessments should be conducted where it is safe to do so, in order to adapt and further refine response actions. answer. As part of the assessments, the displacement tracking matrix and the solution and mobility index can be used.