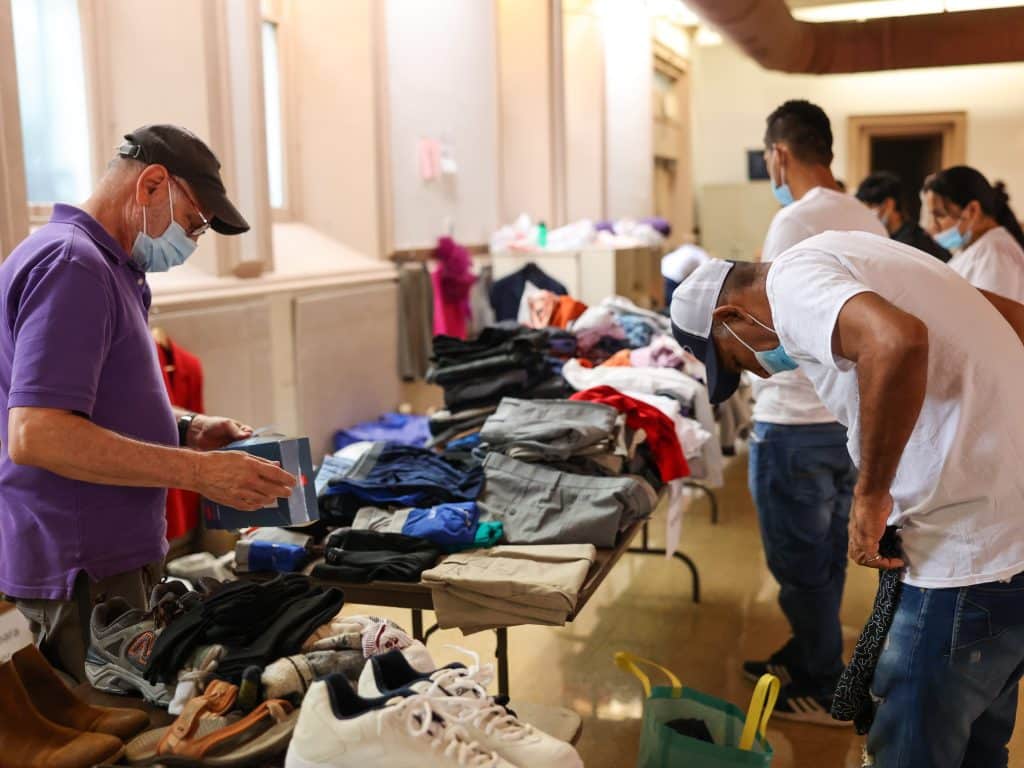 WASHINGTON — For decades, St. Peter’s Catholic Church on Capitol Hill has been known to offer hospitality in its church hall to people arriving by bus in Washington for the annual March for Life.

This summer, the parish also opened its church hall doors on Wednesday and Friday mornings and afternoons to busloads of people arriving in Washington. Since the last week of July, the parish has been welcoming busloads of migrants sent by bus from the governors of Texas and Arizona.

“That’s what we do as a church, to help those in need. There was never a question of not doing it,” said Father Daniel Carson, pastor of St. Peter’s. After doing the walk, it’s very easy for them (the parishioners) to set this up.”

Instead of coffee cups and boxes of donuts lining the tables, the tables in the church hall were covered with piles of diapers, towels, toiletries, shoes, clothes, backpacks, toys and stuffed animals donated by parishioners, parish friends and parish residents. piece.

Other tables held meals from chef José Andrés’ World Central Kitchen, and outside, at the back of the church, were tarpaulin-covered outdoor showers.

“A lot of people come with just the clothes they’re wearing. It provides them with resources for the next leg of their journey,” Pannell said. “We have been really focused on fulfilling our parish mission statement, ‘To be a tangible manifestation of the living Christ in the community.’ It’s just a natural extension of that.

She said parishioners come before work to put donated clothes in place, seniors come in the afternoon to distribute items or play with children and teens helped clean up.

Some parish volunteers drove the migrants to Union Station to catch a bus or train. Parishioners also donated $4,689 to a special collection on July 31 to support awareness.

The parish effort began when Father Brendan Glasgow, Parish Vicar, saw the outreach to migrants arriving by bus at Union Station in Washington.

He spoke with a representative of SAMU First Response – an international humanitarian agency playing a leading role in serving migrants – and learned that one of their greatest needs was to have a space to welcome them with dignity. .

“This is where everything starts to see the need,” Fr. Glasgow said. “There is a real need for these people to see the face of Christ through us. … These are people looking for a better life. Some have come a long way. … Even if we welcome them, what awaits them next is still unknown.

He thought St. Peter’s large air-conditioned parish hall would be a good place to offer that hospitality, and in partnership with SAMU, the parish hosted the first bus a week after he had that discussion.

When the parish announced the outreach, it received negative comments on social media, but he said that didn’t stop them because “we are the church. It’s not political. It is to fill a need for our brothers and sisters.

On the afternoon of August 5, a large bus pulled up outside St. Peter’s Church after traveling about 2,640 miles in two days from Somerton, Arizona, on the state’s southwest border with Mexico.

The 27 migrants getting off the bus, mostly families, included a mother holding the hand of a little girl and a father carrying his young son. A woman outside the bus tearfully greeted her gathered family members.

She was joined this afternoon by seven members of the SAMU staff who guided the migrants arriving at the parish hall and met them to help them plan the next stage of their journey and to help most of them to get in touch with family members or friends.

In April, Catholic Charities in the Archdiocese of Washington began helping migrants arriving on the first buses sent from Texas, and SAMU First Response was one of the agencies supporting their efforts.

In June, SAMU received a grant from the Federal Emergency Management Agency’s Emergency Food and Shelter Program. Since then, the organization has taken a lead role in working with other outreach programs in the metro area to serve the six to 15 migrant buses arriving in Washington each week from Texas and Arizona. It also provided asylum seekers with up to three nights of accommodation in Maryland.

Laborde said many of the migrants who arrived on recent buses are from Venezuela, Colombia, Cuba and Nicaragua. Some are fleeing violence, political situations or economic crises.

Some of the migrants flew to Mexico and then traveled to the US border, others traveled overland, including Venezuelans whose journey included walking through jungles and mountainous regions and traveling by canoe on the rivers.

“These are asylum seekers, allowed to be in the country legally,” she told the Catholic Standard, the archdiocesan newspaper in Washington.

Migrants who arrived at the church hall on August 5 moved from table to table choosing clothes, helping their children try on shoes, then relaxing with a meal from World Central Kitchen. A young boy hugged his new stuffed animal tightly.

Jorge Esteves, his wife, Catherine Ariza, and their children Emilio, 4, and Tiogo, 1, from Colombia were among the families who found respite at the parish that afternoon. Emilio had a new Spider-Man backpack and was holding trucks he picked up at the toy table.

Through an interpreter, Esteves said his family is Catholic and they left Colombia because they couldn’t find economic opportunities there and were concerned about their children’s educational future. .

He had worked in a bakery and done construction work. Now the family planned to connect with friends in North Carolina, where he hoped to provide new opportunities for his children.

As the migrants sat at tables in St. Peter’s Parish Hall, Father Glasgow chatted with some of them in Spanish, including a mother and son from Peru, who said the next stage of their trip would be to Georgia.

The priest said most of the migrants who stop at the parish are Catholics. “Regardless of their religious background… I can give them a blessing,” he said. Praying with migrants was a special experience for him, he added.

After a group of migrants arrived at the parish on a 6 a.m. bus and had breakfast there, Father Glasgow invited them to join him at the 7:30 a.m. mass he would celebrate upstairs in the church.

“About half the group went to mass…I just said, ‘We can give thanks to God.’ (It was) this beautiful moment, a regular morning mass with people in business suits, and (these) people came as they are.

Parish volunteers said they were happy to do their part to help. Volunteer Kay O’Brien said she doesn’t speak Spanish, but communicates through smiles and playing with children.

Tatiana Laborde of SAMU First Response, who is Catholic and originally from Colombia, praised the partnerships with Catholic charities and St. Peter’s Parish that her agency has had serving migrants.

She said she was happy to see the migrants smiling, catching their breaths and resting. Laborde is heartbroken by what they’ve been through, but also admires their resilience.

“It also gives you hope,” she said. “They have arrived at a safe place, and the next chapter begins.”

Zimmermann is editor of the Catholic Standard, the newspaper of the Archdiocese of Washington.