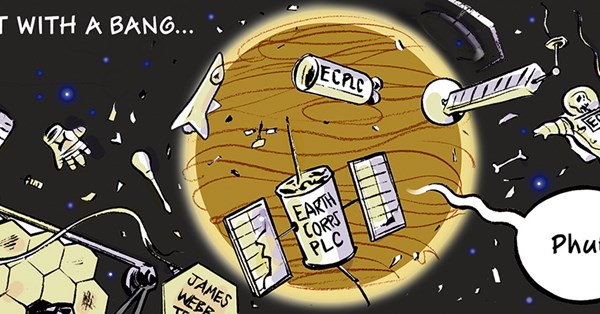 TWO things have happened in recent months that have brought scientific achievement to the public’s attention: the launch and commissioning of the James Webb Telescope and the series of climate-induced wildfires in the UK, in continental Europe and worldwide this year.

The James Webb Telescope marveled at the audacity of its creation and the technical accomplishment. Record temperatures, prolonged drought and widespread wildfires have finally galvanized greater public recognition of the realities of climate change.

The question of time is at the heart of both developments. The telescope reveals the vast period of time it took light to travel from galaxies formed shortly after the Big Bang to our home planet. But life on earth is likely to be measured in a few centuries, if immediate measures are not taken to mitigate global warming.

Large teams of scientists have worked for decades to design, manufacture and launch the James Webb Telescope. During the same period, climate scientists have faced orchestrated criticism and obstruction from organizations with vested short-term interests in the sale of fossil fuels and those who depend on them. After losing at least three decades since the Rio Earth Conference in 1992, we now have a mountain to climb if we are to protect our children’s future.

IF WE are looking for a culprit for this delay, we need look no further than global corporations and their sophisticated program of public disinformation. Corporations now dominate the global economy and are often portrayed as being purposely psychopathic. They have great power over governments and a strong influence on the development of economic and regulatory policies.

Why go after corporations? They are the greatest economic engine of the world economy and are a supranational power. Unlike their human founders, shareholders and customers, they have no evolved ethical or moral codes to regulate their ambitions. They have no emotions or conscience. Company policy decisions are made by boards of directors, whose legal imperative is to make money for shareholders. Boards of directors are almost always appointed from a relatively small group of people and are self-perpetuating. The influence of individual shareholders on politics is almost non-existent.

Managing a company is a no-win situation. The primary responsibility of management is to maximize profit. If they don’t, shareholders can sue them. Business profit is made at the expense of others – environmental damage, loss of jobs due to technological progress, relocation of manufacturing production to a country with lower wages and working conditions, pressure on dependent suppliers.

Consider the thalidomide tragedy, in which a drug caused life-altering birth defects in humans. The legal compensation process took years. It is entirely possible that the individual managers involved preferred to admit fault and pay – but their legal responsibility was to mitigate the company’s loss by fighting compensation claims as rigorously as possible.

Worse still was the Bhopal disaster in India in 1984, which caused hundreds of deaths and thousands of life-changing injuries. Union Carbide, the majority shareholder, avoided prosecution in the United States, and only a handful of local employees were prosecuted, many years later.

THE conflict of interest between the public good and corporate profit is now a global concern. This requires an overhaul of corporate law to shift from maximizing profit at all costs to taking into account social responsibility and environmental impact. This would mean lower profits, but it would free boards from fear of vexatious litigation. It would also bolster the success of any global negotiations aimed at mitigating climate change.

Around the world, there remain remnants of indigenous cultures that still cling to sustainable lifestyles, pursued in harmony with the natural world. Most lack legal protection and are in constant danger of displacement as their original lands are reallocated for commercial purposes. Large multinational corporations control large tracts of the former equatorial forest, now transformed into degraded grasslands, and cultivated to produce cereals sold for animal feed or to raise cattle for export.

In 1950, the value of the world’s gross domestic product (GDP) was $4,081 billion. By 2000 it had risen to $41.016 billion and by 2010 to $62.220 billion. In 2019, it had reached $87.752 billion. This massive growth was achieved as underdeveloped countries became industrialized and developed countries increased their own production. The Organization for Economic Co-operation and Development (OECD) predicts that global GDP will quadruple between 2011 and 2060.

The Earth is a finite planet, and already its natural world is in a state of acute distress, due to our economic activity. The above projections, if realized, could push the planet’s ecosystems beyond sustainability. If so, our time will pass in a few centuries.

Martin Dominic is an engineer who has spent most of his career in the operational management of the energy industry. He is retired and attends Halesworth United Reformed Church.