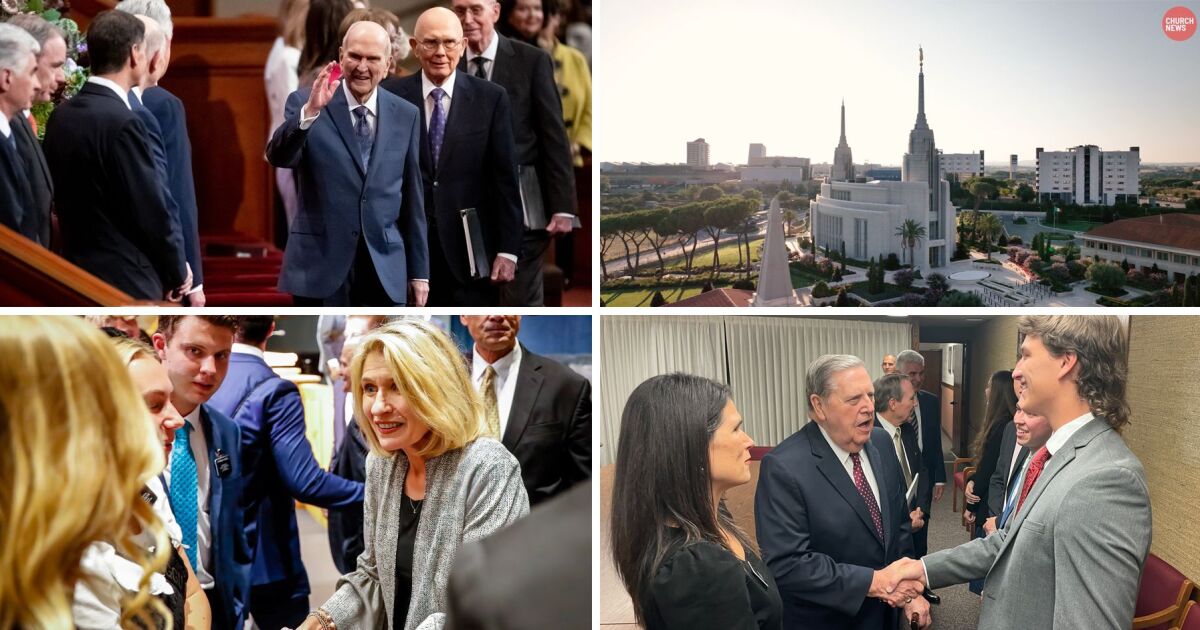 Week in Review: First Presidency on General Conference, Plus 8 Stories

Between August 28 and September 3, the First Presidency invited everyone to participate in the October 2022 general conference. President Dallin H. Oaks, First Counselor in the First Presidency, shared the “meaning of temples” in a new Church News video. Jeffrey R. Holland of the Quorum of the Twelve Apostles visited Washington and shared his thoughts on why youth is a “decade of decision.”

David A. Bednar of the Quorum of the Twelve Apostles spoke and took an intermission during a religious meeting at the Institute of Religion at the University of Utah in Salt Lake City. The Church News reported on Elder Ulisses Soares of the Quorum of the Twelve Apostles’ visit to French Polynesia and took the time to speak to Latter-day Saints while he was there. Relief Society general president Camille N. Johnson visited the Provo Missionary Training Center and shared analogies and personal experiences.

Sister Rebecca L. Craven, second counselor in the Young Women general presidency, and Sister Amy A. Wright, first counselor in the Primary general presidency, have ministered in the Philippines. Renovations to the Kona Hawaii Temple begin in October 2023. This week’s episode of the Church News podcast features former federal judge Thomas B. Griffith.

1. The First Presidency Invites All to Attend General Conference in October 2022

The First Presidency of The Church of Jesus Christ of Latter-day Saints has announced the upcoming 192nd Biannual General Conference October 1-2.

October 2022 general conference will have five general sessions for all individuals, families, and friends—Saturday morning, afternoon, and evening, October 1, as well as Sunday morning and afternoon, October 2.

Learn more about the next general conference

2. President Oaks on the “meaning of temples” in a new video

In this Church News video, titled “Meaning of the templesPresident Oaks recalled attending the dedication of the Rome temple with other senior Church leaders. He was filled with joy that the Church could “build a temple in this great city, which is the seat of Christianity throughout the world.

Speaking Saturday, August 27, in Washington State, Elder Holland asked members of The Church of Jesus Christ of Latter-day Saints to use their teenage and young adult years to chart a course for their lives – to fulfill a greater purpose of serving the Lord with all their heart.

“I felt the need for us to meet both the young people of the Tacoma area and the full-time missionaries of the Washington Seattle Mission,” Elder Holland said.

Read what Elder Holland invited the youth to do

In a Sunday, August 28, devotional at the University of Utah’s Institute of Religion in Salt Lake City, Elder Bednar highlighted Satan’s longstanding strategies of deception and spiritual destruction, and he outlined five basic doctrinal truths taught by the Prophet Joseph Smith as follows: Argue that it is unreasonable to suggest that the Restoration of the gospel and the Lord’s Church in the last days is unreasonable.

5. Brother Soares testifies to the French Polynesian saints of the “brilliant future of this gospel in this beautiful country”

During the week of August 15, Elder Soares not only offered counsel to large congregations and met with humanitarian and government dignitaries, but he also made time in his busy itinerary to minister to Latter Saints. days and families.

During the decade from 2009 to 2019, each member of the family of Relief Society general president Camille N. Johnson has engaged in full-time missionary service for The Church of Jesus Christ of the United Nations. Latter Day Saints.

While thousands of miles apart, the memorable decade of family missionary service has enriched their lives, strengthened their faith, and brought them closer to the Savior Jesus Christ, President Johnson told a wide audience Tuesday. audience of missionaries during a devotional at the Church’s Provo Missionary Training Center: Aug. 30.

Read what President Johnson talked about at Provo MTC

7. Young Women Ministry and Primary Leaders in the Philippines

Patrick Kearon of the Presidency of the Seventy also spoke to the MTC in an earlier devotional.

Learn about Church leaders during their ministry in the Philippines

The First Presidency of The Church of Jesus Christ of Latter-day Saints has announced planned renovations and expansion for the Kona Hawaii Temple, with the temple closing in October 2023.

The scheduled closure was announced Monday, August 29 on ChurchofJesusChrist.org and was accompanied by an artist’s rendering of the exterior of the temple after the extensive renovations.

The renovations and expansion — growing the temple from 9,500 square feet to approximately 12,000 square feet — are expected to be completed by the end of 2025.

9. Former Federal Judge Thomas B. Griffith on the importance of political civility in a divisive landscape

This episode of the Church News podcast features Judge Thomas B. Griffith, former federal judge of the United States Court of Appeals for the District of Columbia Circuit. Additionally, Justice Griffith served as Senate counsel and later as general counsel for Brigham Young University.

A Latter-day Saint, he speaks of religious freedom, the powerful possibilities of the United States Constitution, and civic engagement in an increasingly polarized political climate.

Listen to this week’s episode of the podcast