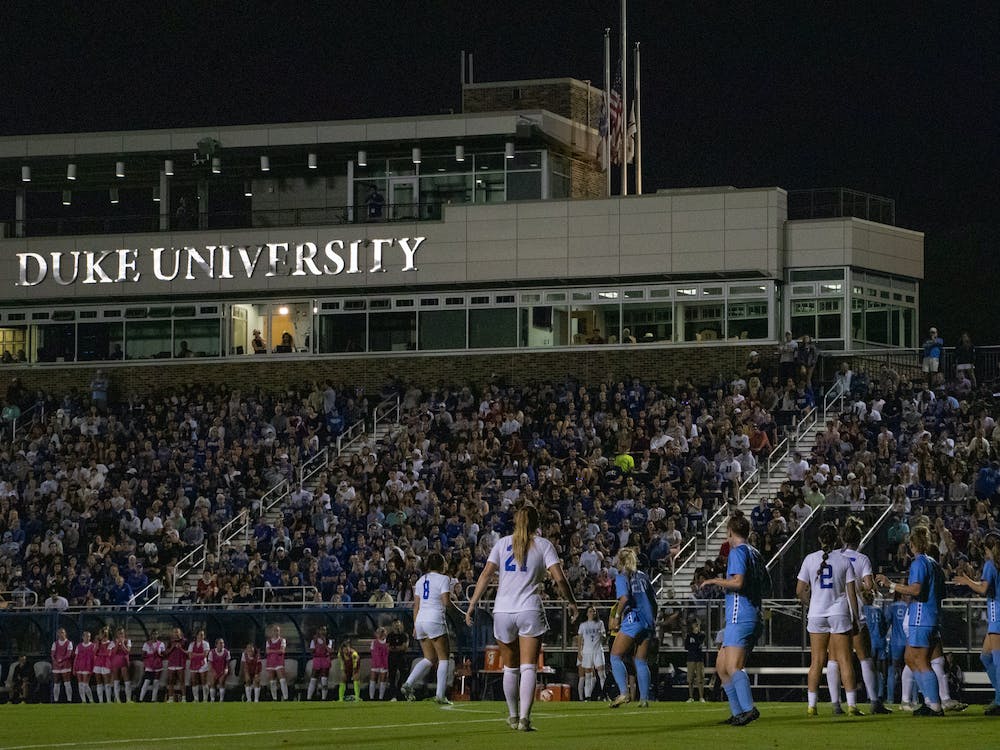 Duke’s No. 3 Women’s Football falls at home to No. 2 North Carolina

Year after year, Duke women’s soccer is poised to break into the sport’s true elite level and come out with a loss. Whether beating the all-time greats and still losing, getting knocked out through self-inflicted errors or wasting home advantage, the Blue Devils trying to break into the top echelon of women’s football have often seemed like a task of Sisyphus.

So, with Duke poised to shift the balance of power in the sport, it was only fitting that something overwhelmingly unique befall him.

The No. 3 Blue Devils fell to second-place North Carolina 3-0 on Thursday, with the Tar Heels extending their unbeaten streak at Koskinen Stadium despite playing in front of their second-biggest crowd since the capacity increase in 2015. North Carolina shut down Duke’s passing throughout the game and dominated midfield. The teams gave each other no quarterbacks early on, but the Tar Heels scored the only goal of the first half. For the fourth time in their last five games, the Blue Devils played better in the second half, but that meant little as they were still unable to hold up long possessions.

“Congratulations North Carolina. They played really well,” Duke head coach Robbie Church said. “They played very well, they invaded us. I thought we had made a good effort; we didn’t have good quality. We have to make better decisions with the ball. But they made us make bad decisions… They seemed to have 13 players on the pitch. And they came ready to play. We did not do it. We weren’t as ready to handle the pressure they played for us.

Following in the footsteps of last year’s historically unhealthy affair, the teams started to get angry after the opening 15 minutes. A total of eight fouls and yellow cards were assessed in nine minutes at the start of the first half, including a yellow on North Carolina center back Tori Hansen for pushing Duke forward Michelle Cooper out of bounds at the 19th minute. Hansen nearly won a second yellow, and therefore a disqualification, minutes later for a tackle on Cooper, but a common foul was called.

The physical seemed to animate the Tar Heels (6-1). North Carolina star midfielder Sam Meza was shown a yellow card in the 25th minute and responded by playing like the best player on the pitch. As arguably the fastest player on the pitch, she harassed Duke holding midfielder Sophie Jones in defense and blew her out on offense. With Jones seemingly troubled by Meza’s play, she was unable to drive the Blue Devils pass, and Duke (5-2) was cornered on her heels.

North Carolina’s possession dominance came to a head in the 34th minute. A cross earned the Tar Heels their first corner of the game. North Carolina forward Emily Moxley served a perfect ball, and Hansen, who used her entire 5-foot-10 frame to jump higher than a pair of 5-foot-7 Duke defenders, headed the ball ahead of goalkeeper Ruthie Jones for the opening score.

“We are surprised, because a week ago today we were [in] such great, great form of keeping the ball, keeping possession, passing,” Church said. “And then, tonight, the pressure was just overwhelming… They were very physical. So they beat us in every aspect of the game tonight.

At halftime, the teams’ stats were quite similar – the Blue Devils had a shot on goal against both North Carolina and trailed in possession by just six percentage points – but the ball had been in the back third of Duke more than three times more than he had been in the Tar Heels. The second half began as the first half ended: the Tar Heels took control of the Blue Devils’ opening possession and found themselves with a wide-opening serve just above the surface to repair. Two minutes later, North Carolina earned their second corner and Hansen opened up on goal again. This time his head went straight to Jones.

For as much as the Blue Devils were outplayed to this point, their one-goal deficit was due to the Tar Heels winning from the margins; Duke’s defense had largely played well. That meant all the Blue Devils needed was to clean up their passing, make a blistering run, or get a little lucky with a crash in North Carolina. Duke’s chances of getting that equalizer evaporated in the 74th minute, when Meza sent a 40-yard serve to the Blue Devils goal. Tar Heel forward Emily Murphy passed Duke wingback Elle Piper and slid unmarked towards the goal. Center back Jenna Royson missed a deflection attempt and Murphy simply redirected the ball past Jones to give North Carolina a 2-0 lead.

Early fouls led to a string of quality chances for Duke through a pair of direct kicks and a corner. Each free-kick brought the Blue Devils a little closer to the goal than the last, with the second free-kick narrowly missing an open Mackenzie Pluck on a stinging run, and the ensuing corner bouncing around the box.

The Tar Heels scored a third goal in the 83rd minute from the foot of senior striker Isabel Cox at the near post. Cox was close to Duke’s last defender, but no flag was raised for offside and North Carolina put the finishing touches to a 3-0 win, its biggest margin of victory in the Tobacco Road rivalry. since 2014. The Tar Heels improved to 4-0. -1 against the Blue Devils in non-conference games.

” We are well. We will be fine. It’s September 8, trophies are not being given out now,” Church said. “It’s a lesson; we have to improve. We understand that. We have to grow from this game. We had a really, really tough time, and I think that caught up with us tonight. But we planned this stretch, and we’re better off because of the stretch.…

“I hope we will see [North Carolina] somewhere down the road.

Duke will then travel to Syracuse, where he will open the conference on September 16.

Get The Chronicle straight to your inbox