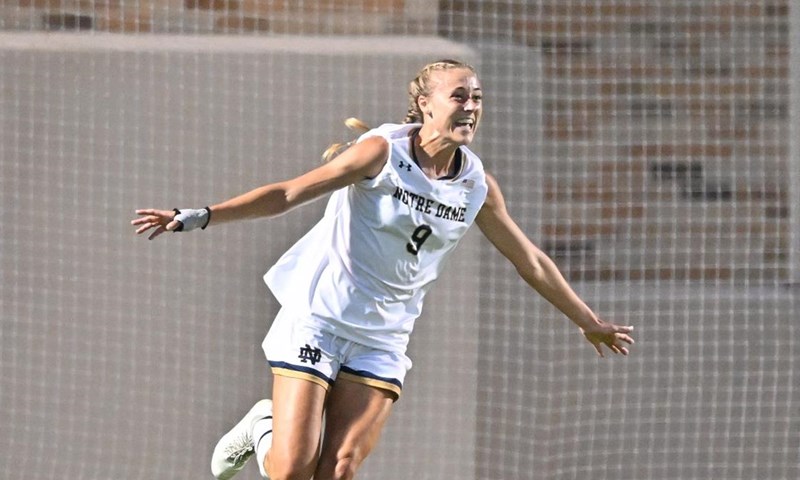 GREENSBORO, NC (theACC.com) – ACC Women’s Soccer kicks off the conference this weekend, embarking on the ACC’s 10-game schedules for each program.

ACC Network offers a doubleheader Thursday, starting with the league’s final non-conference game of the regular season, as NC State entertains High Point at 6 p.m. No. 6 Notre Dame travels to No. 24 Clemson for an 8 p.m. matchup on ACCN. The Notre Dame-Clemson game is one of two ACC games that feature ranked opponents; Saturday night, No. 7 Virginia visits No. 2 North Carolina.

the ranking is the United Soccer Coaches poll

Noting ACC Women’s Soccer
• ACC teams combined to post a 73-10-18 record (.812 winning percentage) against non-ACC opponents. This is the best winning percentage of any league.
• ACC teams nearly quadrupled their opponents on the scoreboard, 243-68. Thursday’s NC State-High Point game is the ACC’s final non-conference regular season game.
• Conference play begins Thursday, with Notre Dame playing Clemson. Each team will play 10 league matches.
• Six ACC teams are ranked in the latest United Soccer Coaches Poll, the most of any league: North Carolina (2), Duke (3), Notre Dame (6), Virginia (7), Florida State ( t12) and Clemson (24).
• Notre Dame is one of four remaining teams nationally (out of 337) that are undefeated with no ties.
• Virginia and Wake Forest are among the five national teams that have conceded one or no goals this season. Each team allowed only one score.
• Five ACC teams are in the top 20 in scoring. Pitt is second in goals per game (3.6), behind only Southern Utah (3.83). Virginia is fifth (3.38), while FSU is 11th (3.17), Notre Dame 13th (3.0) and Virginia Tech 20th (2.88).
• Notre Dame senior midfielder Kiki Van Zanten was named ACC Offensive Player of the Week, while North Carolina junior midfielder Sam Meza was named Defensive Player of the Week of the ACC.
• Van Zanten scored the winning goals in both of Notre Dame’s games last week, a 3-1 win at Purdue on Thursday and a 3-1 victory at home to Ohio University on Sunday. Van Zanten also added an assist in the game against Ohio.
• Meza helped UNC post a 2-0 week with a 3-0 non-league win over Duke on Thursday and a 2-1 victory over UCF at home on Sunday. In the 132 total minutes Meza played last week, UNC allowed no goals while Duke and UCF combined for just six shots.
• In the ACC’s preseason coaching survey, Duke was narrowly selected as the preseason favorite. The top four teams in the poll were separated by only 13 points overall: Duke (156), Virginia (153), UNC (150), FSU (143).
• The All-ACC preseason team includes 12 student-athletes, all of whom have previously earned All-ACC honors, including four returning All-ACC first-team winners: Duke’s Michelle Cooper, rookie year 2021, as well as Megan Bornkamp (Clemson), Maycee Bell (UNC) and Lia Godfrey (UVa).
• Current ACC members have combined for 27 NCAA championships. UNC has 21 NCAA titles and FSU three, while Notre Dame won three before joining the league in 2013.
• Three ACC head coaches rank in the top five in NCAA Division I for most wins by an active head coach. Longtime UNC head coach Anson Dorrance leads the way with 908 wins. Steve Swanson of Virginia is fourth with 458, while Randy Waldrum of Pitt is fifth with 438 career wins. Duke’s Robbie Church is 13th among active coaches with 364 career wins, while Wake Forest’s Tony da Luz is 16th (336).
• Nine ACC teams have been selected for the 2021 NCAA Championship, the most of any league.
• ACC teams have made 55 College Cup appearances – the most of any conference (the next closest conference is the Pac-12 with 28 appearances). The current membership has combined for 67 appearances.
• The ACC has had a team in the Women’s College Cup in 39 of the last 40 NCAA tournaments and in each of the past 16 years.