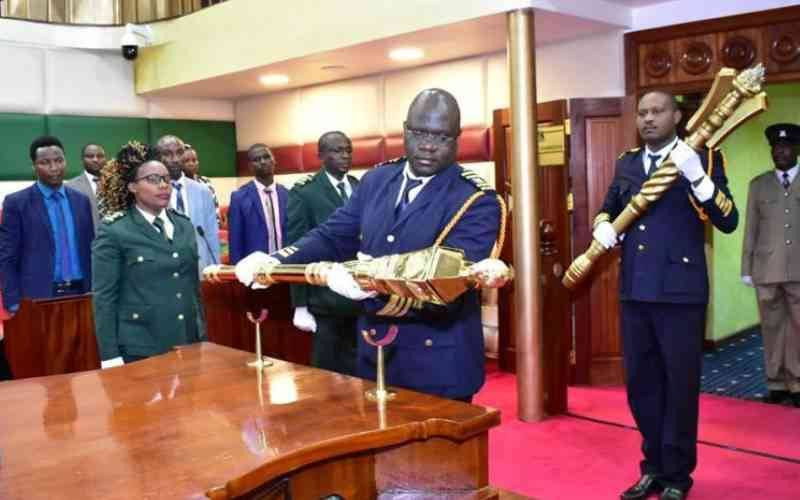 Lobbying for County Assembly Speaker seats ahead of election

With just days to go before they elect a new batch of County Assembly Speakers, lobbying has intensified inside and outside the second arm of the devolved units.

Politicians and other interest groups are burning the midnight oil trying to get their favorite candidates to get the coveted job.

The chairmanship, which comes with lucrative perks, has already attracted several people as governors keep their fingers crossed in hopes that those who land the job will work smoothly with them.

It was the situation on the ground that saw Kenya candidates Kwanza Alliance and Azimio la Umoja-One Kenya meet with elected MCAs to present their manifestos.

In some counties, elected MCAs are taken for retreats away from home as a way to ensure there is no infiltration from their opponents.

The county assembly speaker, as at the national level, is third in line at the county level.

The law allows him to act for 60 days, during which time a new governor must be elected.

Most county assemblies will hold their first sittings on Tuesday and Wednesday next week, according to announcements placed in local daily newspapers.

The first business of the Chambers after the swearing in of the elected MCAs will be the election of new presidents.

In Nakuru, six people are eyeing the job with incumbent President Joel Kairu who served one term declaring his exit from the race.

“I have thought about the matter and have decided not to compete for the position. I wish the next speaker good luck as he leads the House for the good of the county,” Kairu said in an interview. telephone.

He pointed out that the numbers in the House were probably not in his favor, noting that members of the United Democratic Alliance (UDA) had the majority.

In the August 9 elections, Kairu had run for the seat of MP for Nakuru Town East on a Jubilee ticket, but came out second to incumbent David Gikaria.

Naivasha East MCA elected Stanley Karanja, who is among 11 out of 55 ward representatives who have made a comeback, said campaigns for the seat had cooled until the nominations were made official.

“There are approximately six candidates in the race who are now lobbying nominated members to support their candidacy. We will use our wisdom to choose the best of them,” Karanja said.

Former civic leader Andrew Yatich and Crispus Wathimba, who both unsuccessfully fought for the Nakuru Senate seat in the last general election, are also in the running.

In Kericho County, Dominic Rono is defending his seat but he faces stiff competition from former Bureti MP Japheth Kiptegech.

Kiptegech, who served as the assembly’s first speaker (2013-2017) before joining parliament for one term, has launched an aggressive campaign to reclaim the seat.

In Baringo, 10 candidates are jostling for the position. Outgoing speaker David Kerich withdrew.

In Nyanza, The Standard on Sunday found that the ODM party, which commands control of the County Assemblies, has its preferred candidates and is pressuring the MCAs to support them.

Nightly meetings, retreats and lobbying of party stalwarts have become the norm in Kisumu, Siaya, Homa Bay, Migori and Kisii counties as the scramble to lead the assemblies intensifies.

In Kisumu, ODM has already asked MCAs to support a shortlist for the seat of President, Majority Leader and Chief Whip. The party faces current President Elisha Oraro for another term.

In a letter to the Clerk of the County Assembly, ODM General Secretary Edwin Sifuna said the party had endorsed Oraro for another term.

However, the move did not bode well with a section of new ward representatives seeking regional balance in seat sharing.

Disgruntled neighborhood representatives are pushing for the election of former majority leader Samuel Ong’ow, who hails from the Kano clan, as president.

The clan produced no chiefs for the upper county seats.

The race attracted four candidates. Besides Oraro, the others are former Majority Leader Ong’ow and lawyers Sam Onyango and Kenneth Amondi.

A similar stampede is also developing in Migori where six candidates are vying for the coveted seat.

According to Likowa, the last assembly was marred by frequent fights and a lack of respect for the law.

In February this year, Okoth was impeached by 42 of the 46 MCAs.

The candidates pledged to provide diligent services to the residents of Migori in close consultation with the county executive headed by Governor Ochillo Ayacko.

In Siaya, intense lobbying to ensure that current President George Okode, who hails from Rarieda, retains the seat.

In the 2013 pre-election pact, the first county seats were distributed among the six sub-counties, with the post of chairman going to the Rarieda constituency.

In the August 9 elections, Alego-Usonga, Bondo and Gem won the posts of deputy governor, senator and representative respectively. The seat of governor was won by James Orengo, a native of Ugenya.

The 38 MCAs in the county assembly – 30 elected and eight appointed – will have the final say on whether the incumbent should remain or be eliminated.

Other candidates pushing for the seat are lawyers Evans Oruenjo, George Mugoye and Fred Athuok.

In Kisii, those interested in the seat include Philip Nyanumba who unsuccessfully ran for the parliamentary seat of Bomachoge Borabu in the UPA party and former MCA nominee Erick Janganya who also ran for the seat of UPA. South Embakasi.

Laban Chweya, who ran for Nyaribari Masaba’s parliamentary seat, is also in the running, as is lawyer Gideon Nyambati, president of Kenya’s South Nyanza Law Society.

In Nyamira, Edwin Morara Otwoma and Daniel Nyaoncha Nyamweya are the only candidates to have submitted their applications before the 11 a.m. deadline on Thursday.

In Murang’a, incumbent President Nduati Kariuki said he would not defend the seat he has held since 2013, leaving Lawrence Munga, Johnson Mukuha and Stephen Macharia to fight for the seat.

Nduati, who is over 70, said he would retire from public life to engage in his private affairs, advising others his age to let younger people take on leadership positions.

Mr. Saaya says it is time for someone from Laikipia North constituency to fill the post.

In Meru, Governor Kawira Mwangaza has scheduled the first sitting of the county assembly for Wednesday morning.

Dr Joseph Kaberia, who has held the seat for 10 years, is seeking a third term.

But the MCAs will be torn between politics, regional balance and gender equality when they elect the president.

An MCA, who asked not to be named, said he was under pressure from various quarters to vote in a way that shows “Meru’s face”.

There is a push for the position of speaker to go to the Tigania sub-tribe since the Imenti and Igembe sub-tribes occupy the other in the political seats in the county.

Governor Mwangaza is from Imenti, as is Senator Kathuri Murungi. Female Representative Elizabeth Kailemia, although Imenti, is married to Igembe.

Lawyers Mugambi Laichena, Marius Maranya, Joseph Kaberia and Lucas Kobia are among other candidates who have shown interest in the seat.

In Kirinyaga, the candidates running are James Mutugi, the incumbent CEC Education and Governor Anne Waiguru’s first vice-presidential candidate, and former Wamumu MCA Baptista Kanga who lost in the August 9 election as he was a UDA candidate.

In Nyeri, former Tetu MP James Gichuhi is considered a favorite under the party’s power-sharing deal after losing the primaries.

The pre-election agreement ensured the regional balance of the constituencies, where each of the six constituencies would get a place in the county after the elections.

The UDA has 25 of the 30 neighborhood seats in the region.

In Taita-Taveta, a total of 18 candidates, including lawyers and losers, declared their interest in snatching the seat from Meshack Maghanga, who served two terms.

The others are Omar Nguzo (PAA), loser of the Challa quarter seat, former District Commissioner Wisdom Mwamburi and Geoffrey Kimonge, who served as political adviser to former Governor John Mruttu.

Candidates met with MCAs to win their support.

The church helps bring electricity to the Diné community of Westwater

The United Methodist Church of Carthage celebrates its 200th anniversary