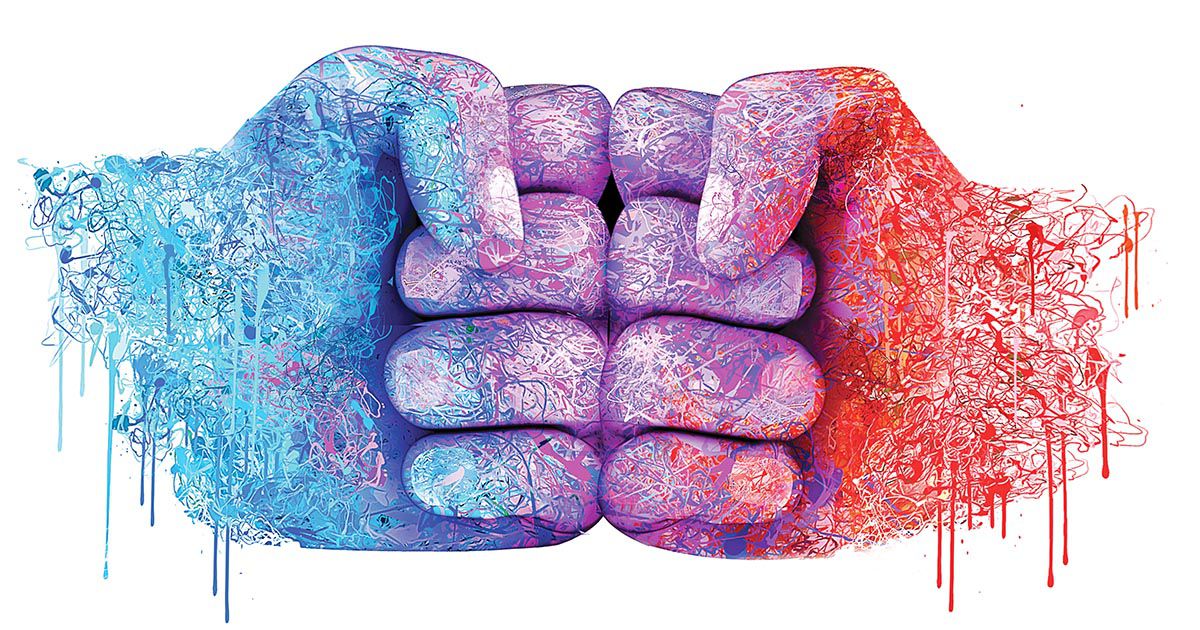 Joe Lieberman and Will Hurd approach politics with the same focus: the political arena is a place to get things done, especially big things.

Lieberman is a former Democratic vice-presidential candidate who later became an independent during his last term as a senator from Connecticut, while Hurd is a former Republican congressman from Texas. Their common vision of governance and leadership shouldn’t seem earth-shattering, but their common pursuit runs counter to today’s partisan politics.

We probably all know what doesn’t work: fanaticism that turns violent, supporters who see opponents as immoral enemies, and justify opposition to an idea simply by pointing out that the other side favors it. The flip side of this approach is what interests me most: what can work in Washington and across the country to move America forward?

This is what makes Lieberman and Hurd’s observations worthwhile. Here are some of the recommendations from their discussion with my Bush Institute colleague Matthew Rooney and myself for the most recent edition of The Catalyst: A journal of ideas from the Bush Institute:

These former lawmakers have recently written books explaining their strategies for making Washington work. Lieberman argues in The Centrist Solution: How We Made Government Work and How We Can Make It Work Again that centrism is not a philosophy. It’s more of a strategy to get things done. It starts with being willing to meet people with different viewpoints, constructively discussing a public issue, and being willing to negotiate a solution.

Hurd is the author of American Reboot: An Idealistic Guide to Doing Great Things. He pleads in his book for a pragmatic idealism, which consists in applying his beliefs to the realities on the ground. Its chapters lead the way with titles like Introduce yourself so you can listen, don’t flatter, build trustand We’re all in this boat together.

I especially like the admonition to show up to listen. Hurd writes how he organized about 400 public events, including 25 town hall meetings, during his first term. That was no small feat considering his district took over 10 hours to cross at 80 miles per hour.

“I may have started the trips with the intention of having as many opportunities as possible to persuade my constituents to vote for me,” he explained, “but I realized early on that these travels gave me opportunities to listen.”

Hearing the other side and trying to understand their point of view does not mean that you have to give up your own beliefs. But that requires you to at least realize what another person values ​​and why they value it.

Authentic listening takes hard work. It means hiring someone with whom you fundamentally disagree. Both parties need to move beyond the talking points. And that requires recognizing the dignity of the other and not demonizing them.

I’m under no illusions that Americans are suddenly going to have a political Great Awakening where the extreme people in every party are going to be banging their heads and saying, “Oh, you’re right. We are going to start working with people we consider immoral. A recent Pew Research Center study found that 63% of Democrats and 72% of Republicans think members of the opposing party are more immoral than other Americans.

But it is possible for the quiet people in the middle – those who hear other quiet people, as George HW Bush once said of himself – to take the basic principles that Lieberman and Hurd talk about and apply them to the problems public.

we can do things

These essential ingredients were on display in the bipartisan gun control legislation that Republican Sen. John Cornyn of Texas and Democratic Sen. Chris Murphy of Connecticut pushed through Congress after the Uvalde massacre. No one got everything they wanted. More could have been done. But the legislation included elements that addressed some of each party’s goals.

Similarly, the White House this year signed an infrastructure bill that lawmakers like Republican Sen. Rob Portman of Ohio and Democratic Sen. Joe Manchin of West Virginia negotiated through lengthy negotiations. We will have better roads, bridges and even greater Internet access because problem solvers on both sides have shown common sense and courage. You know it’s a breakthrough when President Joseph Biden and GOP Senate Minority Leader Mitch McConnell of Kentucky applaud the same bill.

Ukraine is another example where Democrats and Republicans, as well as European allies, have largely come together. Although all the support for Ukraine did not materialize easily, we saw a common effort to keep Ukraine free. It is a good example of democracy rejecting authoritarianism.

These examples show that it is possible to work together for the common good. But that takes leadership. Holly Kuzmich, my colleague from the Bush Institute wrote in this same edition of The Catalyst how leaders make things happen in Washington, DC, by raising awareness of an issue; set an inclusive and optimistic tone; have a set of clear principles to guide any negotiation; and ensuring that each side achieves some kind of victory in compromise.

Some impending challenges are ripe for this type of leadership. Hurd emphasizes protecting our digital infrastructure from foreign adversaries. Lieberman suggests creating innovative public-private partnerships that strengthen our ability to compete with China. And they both argue that the way to modernize our immigration system is to secure our border and streamline pathways to legal immigration.

China in particular presents an opportunity for both sides to share a common agenda. As Hurd puts it, Beijing wants to attract the rest of the world to its governance model. So let’s continue to find ways to show that our model of democratic governance and market economy works effectively while upholding and protecting our values.

One way to persuade others in the world, especially skeptics, is for both sides to demonstrate that we can still get things done, including the big things. Another way is for Congress to continue to invest adequately in initiatives such as the National Endowment for Democracy, Radio Free Asia and Voice of America. Efforts like these help other nations learn democracy and develop institutions like a free press and an independent judiciary. In return, they benefit from an open society. They will not reap these fruits if they go the way of Beijing. Just ask the relatives of imprisoned democracy activists in Hong Kong or Uyghurs living in Chinese concentration camps.

Of course, we the people have a central role to play in making Washington, or any level of government, work better. In this regard, there may be reason for hope. A team of political scientists wrote a study this spring entitled “Moderate.” In short, they argue that political elites are more polarized than the moderate majority, which tends to have a mix of political views.

Some political scientists refute their conclusion, but Oklahoma City Mayor David Holt says he sees a silent majority at the local level that isn’t as polarized as some political and cultural elites. Holt, a Republican elected in a nonpartisan race, passionately believes in renewing our country through a greater belief in pluralism. Most people still understand, he said in a recent exchange, that our country is best served by working across our differences.

Working constructively with others with different points of view is sometimes easier to do at the local level. After all, there are no Republican streets or Democratic water supplies. We all need it, regardless of our partisan leanings. Local politics can be deadly, but there’s a reason mayors like Holt argue that running a city is one of the best jobs in politics.

The past is a guide

We certainly have a lot to learn from the past on common solutions. The bipartisan coalition of President George W. Bush, Democratic Senator Ted Kennedy of Massachusetts, Republican Senator Judd Gregg of New Hampshire, Republican Representative John Boehner of Ohio, and Democratic Representative George Miller of California passed the No Child Act Left Behind Act. in 2001. President Bill Clinton and GOP House Speaker Newt Gingrich of Georgia negotiated, sometimes acrimonically, a balanced budget deal in 1997. And Reagan White House Chief of Staff James A. Baker III stood joined with Democratic House Speaker Tip O’Neill and a team of Republican and Democratic leaders to rescue Social Security from financial peril in the early 1980s.

Breakthroughs like these don’t happen without each side trying to hear the other, understand what they need, and build compromise from the middle. Along the way, friendships even develop.

Readers may have heard stories of Republican Presidents Ronald Reagan and Gerald Ford being friends with Democrat O’Neill despite their differences. I got a glimpse of this kind of relationship while editing an opinion journal in Washington in the 1980s. One afternoon I was interviewing Senator Bob Dole in an open seating area near the United States House when the Kansas Republican’s eyes suddenly lit up. Then, I heard a big booming voice behind me.

It was O’Neill, rushing with assists through the area. Dole stood, the couple happily engaged, and O’Neill bellowed in his Massachusetts accent, “Can’t get you a meeting room?” Dole politely declined and we both sat down and watched the Democratic legend walk down the long hall. O’Neill turned at the end of the room and shouted again, “Are you sure I can’t find you a room?” Dole smiled, again politely declined, and said something like, here’s a great man.

I often think of this story when it comes to practicing pluralism, which is about respectfully engaging with others with whom we disagree. Sometimes people see the world differently. This reality does not make the “other” immoral or our enemy. When we move beyond a binary worldview, sometimes we can even overcome our differences to “do great things.”

We have certainly already done so.

William McKenzie is editor of The Catalyst: A Journal of Ideas at the Bush Institute. He wrote this for The Dallas Morning News.

We welcome your thoughts in a letter to the editor. Consult the instructions and drop your letter here.