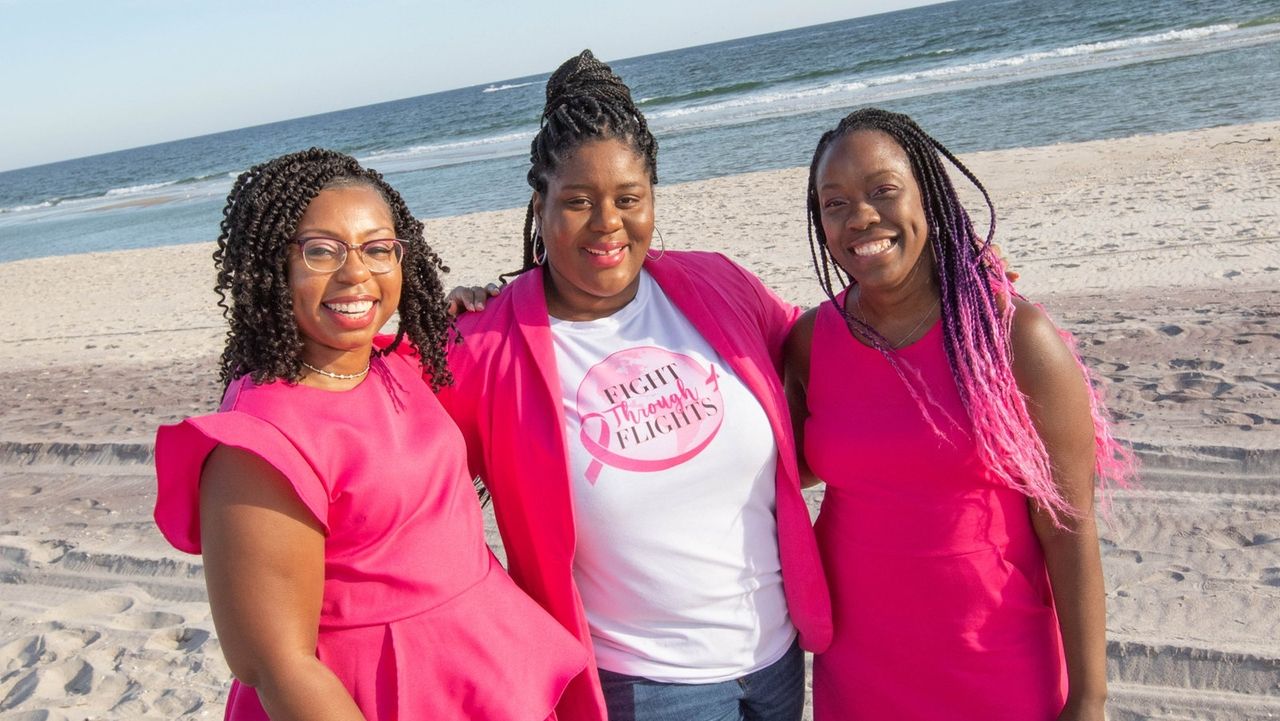 Alexea Gaffney took an all-expenses-paid trip to an island in Belize in April with Esther Tambe and five other black women. They shared early morning yoga, enjoyed massages and meditated under the moonlight on the sand outside their hotel.

What brought the group together was breast cancer: each is either in active treatment or a survivor, and all work with black women battling the disease.

The four-day event was sponsored by Tambe’s new non-profit organization called Fight Through Flights, whose mission is to support the healing of black women affected by breast cancer by providing free wellness retreats and travel experiences. Tambe, a 35-year-old dietitian from Westbury, and her sister, Alicia, a 33-year-old attorney living in Washington, D.C., started the charity in August 2020 to honor their older sister, Maria, a Houston nurse who is died of breast cancer in 2019 at the age of 40.

“I’ve had it all – bilateral mastectomy, chemotherapy, radiation,” says Gaffney, 41, who works as an infectious disease doctor in Stony Brook and is the mother of an 11-year-old daughter. “Even when your chemo is over, your hair has grown back and you don’t have to climb on a radiation table, you’re still very well enrolled in medical care.” Gaffney takes pills daily and receives monthly injections in her stomach as part of her long-term treatment. “Taking a break, having all your delicious fresh and healthy meals prepared for you, arriving somewhere and getting a massage and breathing a sigh of relief, it’s just a beautiful thing.”

Esther and Alicia Tambe chose to focus on providing travel and wellness experiences for local women because traveling was something the three sisters enjoyed doing together, Esther says. The trio grew up in Westbury; Maria and Esther graduated from Hicksville High School and Alicia from Holy Trinity of Hicksville. As adults living in different places, the sisters would meet to travel to Europe and South America; their last trip was to Napa, California in March 2019.

One year from Maria’s death, Esther and Alicia wanted to do something other than cry. “What can we do to keep his legacy alive? they wondered. “Knowing that the trips have brought her joy, we would like to give that to someone else,” says Esther.

The sisters focus on black women because, on the one hand, they are black women themselves. Second, they find disparities in breast cancer treatment and outcomes for black women disturbing.

“When you look at the statistics, they are alarming and frightening,” says Tambe. Black women may not have access to early detection and treatment, may be underrepresented in clinical trials, and may be more likely to have aggressive cancers like the triple-negative breast cancer that killed Maria just a year old. after his diagnosis. Black women have a 40% higher breast cancer death rate than white women, and breast cancer is the leading cause of cancer death for black women, according to the 2022 Breast Cancer Statistics from the United States. ‘American Cancer Society.

Valerie Burger, an oncology nurse, assistant vice president of operations at Northwell Health and chair of the American Cancer Society’s Long Island Advisory Board, applauded the goal of Fight Through Flight. “We know that the immune system reacts to stress, and it also reacts to relaxation. Your blood pressure goes down, your heart rate goes down, and your body has a chance to focus on healing,” she says.

Because Fight Through Flights was launched during the pandemic, the women’s flight to the Caribbean islands had to be suspended. The Tambes expanded Fight Through Flights offerings to programs they dubbed Roadtrip to Recovery, offering trips women could drive to in hours, and Staycation Serenity, sending spa services to women’s homes. They also run Room to Breathe, with the goal of providing 120 recipients with a one-night stay at a hotel of their choice that costs less than $250 per night, Tambe says. They are funded by small grants and donations, she says.

The sisters were featured in September on “The Kelly Clarkson Show,” during which the daytime TV host showed the group a 29-foot motorhome, courtesy of Bish’s RV, that can seat up to to eight people. Tambe says Fight Through Flights hopes to park it at various RV parks to provide trip recipients with nature getaways.

Shoni Brown, 43, a physical education and health teacher who lives in Freeport, had a Roadtrip to Recovery in September 2021. “They helped me plan a trip for my chemo versary,” says Brown , marking five years after the end of chemotherapy .

Brown was treated to two nights at French Manor, a stone castle-style bed-and-breakfast in the Poconos. She took nature walks and swam in the indoor saltwater pool. “I was able to relax and have fun without thinking about cancer,” Brown says. She also received five sessions on Long Island with a personal trainer, nutritionist and therapist. Brown continued with the therapist, who is in her health care plan.

Once flying became an option, the Tambe sisters organized the leadership retreat in Belize – their secondary goal was for the women to think of other ways to make life easier for black women with breast cancer .

Gaffney says she believes she was chosen because she used her Instagram platform – @dralexea – to educate followers about her breast cancer journey. Gaffney was already following Fight Through Flights’ Instagram when she saw the group looking for black female leaders for retirement.

“As a mother, I would struggle to take that money out of my household to plan such a well-executed vacation,” she says. “I think Fight Through Flights is a fantastic organization. It takes away that stress of being selfish. I’m allowed to completely immerse myself in the fun and self-care and feel no guilt about it.

Beth Whitehouse writes about families, parenting, and good things to do with kids on Long Island. She served as editor of Newsday and shared a Pulitzer Prize from Newsday staff in 1997 for coverage of the crash of TWA Flight 800.